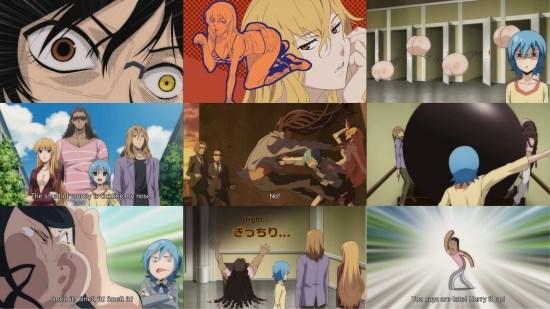 Strange+ is a 2002 gag manga series that was originally written and illustrated by Mikawa Verno. The manga was serialized in Ichijinsha's Monthly Comic Zero Sum and gained attention within the shoujo community. As of 2014, the series consists of thirteen volumes and is currently ongoing. It wasn't until recently that studio Seven decided to turn Strange+ into an anime series, which first aired this January.

The anime series focuses on protagonist Takumi who is the head of a private detective firm. As impressive as that may seem, the firm only consists of three interesting employees: Masamune, a muscular individual who enjoys Sailor Moon and seeks to possibly be a gravure idol; Miwa, a busty female who, according to the opening theme, can fight just as well as Natsume Maya; and Kou, a character with murderously violent leanings who seems to be obsessed over his brother Takumi. All in all, the series is very similar to Scooby Doo, only not so much. Interestingly enough, each episode typically runs a little over three minutes, which adds to its erudite humor.

In today's society, there's usually some sort of label, tag, or warning on every CD, DVD, and video game sold,  and anime's no different. Maybe that's why Mikawa Verno added the "+" in Strange+, to show his potential audience that his series is a little more bizarre than the average gag series. Let's explore.

In episode one itself, the viewers are exposed to the typical trope of a girl running with toast in her mouth, an opening that looks like it belongs in Tenjou Tenge, an enraged Masamune raising his power level, a “Benjamin Franklin” cosplayer asking for help, a thief named "Rusty Nail," a three second moment dedicated to theatrical poses... (take a breath... now let's continue) flying butts, a treasure chest secret route, explosive shiny butts, a destroyed mansion, and much more. All within 3 minutes.

Episode one focuses on a short story, while adding a lot of random scenes that viewers never saw coming, which makes it likeable. Viewers may need to watch the episode a second time in order to soak it in. Fortunately the series adds something different to the table, making it a little more distinctive than other simulcasts released under Crunchyroll's winter 2014 line-up.

Episode two does a fine job in revealing each characters personality, while still sticking to a short story, alongside random acts. Viewers are able to see that both Takumi and Kou are in need of anger management classes; Masamune's skills in referencing lines from Sailor Moon; and Miwa's double personality. Judging from their odd actions and personality, it's hard to imagine how the detective firm would act around normal society, which is typically what they're assigned to do when they "guard" their client around town... although something tells me that the client will be scarred for life after being forced to smell Takumi's foot. Now that's strange.

Let's not even mention the the image still that was featured on episode two. Viewer Discretion is Advised; this show is strange.

With an anime series having a run-time of three minutes per episode, there shouldn't be room for too much error - but there is. Oddly enough, the animation for episode three was quite different than the animation used for previous episodes, which is unfortunate. The animation used in episode one and two were of a higher quality, consisting of brighter colors and detailed features among the characters and environment.  Yet, the animation used for episode three was rather poor, inconsistent, and generally felt "off". Try to imagine the animation style of Hunter x Hunter (2011) being converted to the animation style used in Durarara!! - that's almost as disturbing as the aforementioned picture still. The animation style was so horrendous that I'm still trying to figure out if Miwa wasn't included in this episode or if she was the female who looked very similar to Johnny Bravo - only more terrifying. In addition, the story and humor wasn't the same. It seemed more of a parody gone wrong of Strange+ than the actual Strange+ from episodes one and two. Hopefully the series will stick to one type of animation style and a consistent format. If not, then the series may just transition from "strange" to "weird" in no time.

After watching episode three I'm not sure how I feel about Strange+ anymore, but if you enjoy explosive butts, anime references, a fast-paced series and an Ishida Uryuu cosplayer in the opening theme, then you'll love Strange+!

You can currently watch Strange+ in streaming form via Crunchyroll.

8
Unpredictable, humorous and distinctive, Strange+'s fast-paced story leads to moments that neither the audience, nor characters, were expecting.
COMMENT AND DISCUSS
blog comments powered by Disqus