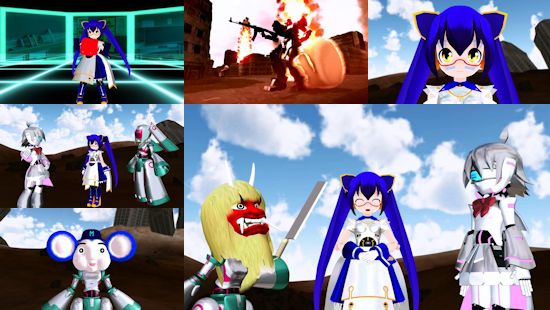 It's the year 8013, and humanity has been wiped out entirely, leaving only robots embroiled in an endless war to roam the planet as they seek out victory no matter how futile such an effort might be. Not quite the kind of opening you might expect from a comedy series, is it?

Another thing you might not expect to see is a series created entirely using Miku Miku Dance, a 3D modelling application of sorts whose primary use is to create videos of Vocaloid characters dancing and singing to songs created using the aforementioned Vocaloid software. Indeed, "it looks like it was created in Miku Miku Dance" is the kind of thing we'd normally jokingly level at the CG employed by a series as a criticism, yet here we find ourselves watching a show that wears that comment as a badge of honour!

Anyway, rather than focusing directly on this out of control robot war, Straight Title Robot Anime focuses on three robots who were created to perform household tasks rather than engage in combat, and understandably this trio is rather bored with the whole epic war thing and wants it to end as quickly as possible. But how can they possibly hope to speed up the outcome of this conflict? The conclusion that they come to after searching through all of the information left behind by humans is that laughter is the best medicine to solve this conflict.

From here, each episode of Straight Title Robot Anime splits itself into three segments. In the first, our trio of robots try to deconstruct and understand what comedy is, whether it's the potency of one-liners or how and why impressions can be funny - they then try what they've learned out on one another, which of course fails miserably. Because they're robots, see?

Next up, the trio apply some information they've discovered about what might be considered funny to a simulation of the world they live in to see the results - results which are inevitably disastrous and do more harm than good. Who knew that throwing giant marshmallows at giant robots would result in even more havoc being wreaked?

Finally, we come to the part of this series that I like to call "the funny bit". This is far and away the best part of the show, simply because it's entirely ad-libbed by the trio of voice actresses who play the three robots. In short, they're given a human setting (a supermarket for example) and a set of props that might be found in such a setting, and try to figure out (in character of course) how humans might have used these items. As the voice cast warm up to this idea, each episode seems to become increasingly hilarious through when it comes to this segment - the cast are desperately trying to keep the robotic personas of their characters intact, but invariably end up giggling and cracking up at the ridiculous things their colleagues are saying or doing. We're presented all of this as is, under the premise that "the characters aren't laughing, it's just interference to their speakers" to try and wave away the fact that the robots shouldn't be laughing.

It's far and away this final segment of each episode which makes the series, I suspect not because it's all that funny in its own right but because the voice cast's inability to keep a straight face is highly infectious - it's hugely enjoyable to hear the three of them trying to stay in character and either making a mess of it or breaking into a fit of giggles as their ad-libs descend into silliness, and most episodes quickly become something of a competition within the trio to see who can put together the most outrageous props or setup and make their fellow voice actresses laugh.

The real shame here is that the rest of each ten minute episode doesn't come close to living up to the fun that comes from watching that final segment - the first chunk of each episode is too dry to be funny most of the time, and also relies heavily on references to Japanese comedians which doesn't help from a western point of view, and the second segment has some good moments and ideas but the use of Miku Miku Dance means that the visual gags soon become repetitive.

It isn't often that you'll hear me say "I wish this show was just a three-minute short comedy", but that's exactly how I feel about Straight Title Robot Anime - present its ad-libbed section in the same context of robots trying to learn about comedy and humanity on its own and it would still work perfectly (and is even accentuated by the limited visuals, but as it is it's weighed down by the fact that its more traditional skits largely don't work. It enough to make me wish there were more opportunities for voice casts to ad-lib - gdgd Fairies also seems to use this to good effect, and Ad Lib Anime Kenkyuujo is a show dedicated entirely to the concept which sadly (if understandably) never got any traction outside of Japan.

While I can't recommend that people sit through all of Straight Title Robot Anime, may I suggest this - watch all of episode one, then spend the rest of the series fast forwarding to the final ad-libbed segment where all the best comedy resides. In that sense, it's a perfect candidate for streaming viewing.

You can currently watch Straight Title Robot Anime in streaming form on Crunchyroll.

6
Its ad-libbed sections are infectiously funny, but this is dragged down by the fact that the rest of each episode is decidedly average at best.
COMMENT AND DISCUSS
blog comments powered by Disqus