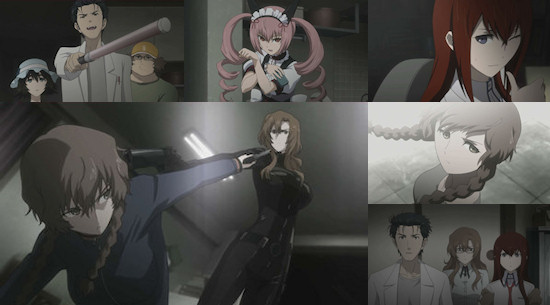 Having spent so much of its first half introducing us to the motley crew of members which come to make up the Future Gadget Lab in an often highly amusing slice of life fashion, Steins;Gate took great glee in dropping a bombshell into the midst of this happy blend of goofing around and, thanks to some incredibly serendipity, work on a time machine that can not only send text messages into the past but also send the contents of a human memory back in time.

It's this latest innovation that plays a key role in the second half of the series, as Rintarou Okabe's mad scientist alter-ego gets violently shoved aside while our protagonist first tries to escape the tragedy to befall his childhood friend Mayuri before instead trying to alter her fate - but is it really possible to save somebody in the face of a world that has decided the outcome of her life already?  Just when it seems that all hope is lost, so the intelligence of Kurisu Makise comes to the rescue to suggest a potential escape from the vicious circle into which Mayuri and Okabe are trapped, via a journey that comes directly into conflict with all of the actions carried out by the Future Gadget Lab in the first half of the series.

This is the point at which the genius of Steins;Gate really begins to shine through, creating a tangled web of timelines where cause and effect becomes borderline butterfly effect as Okabe finds himself tasked with unpicked the threads of time itself to save his friend - a task which becomes ever more emotionally fraught as the true extent of what he has to do becomes clear, as does the fact that the future of the entire world might well be resting upon his decisions.

What this means in essence is that each and every episode throughout the second half of the series is packed to the rafters with twists, turns and cliff-hangers which never manage to feel contrived no matter how outlandish they may seem - cast your mind back to seemingly innocuous decisions in the first half of the series and it soon becomes clear that everything within the confines of the series makes utter sense, and you're guaranteed to suffer at least a few "why didn't I see this coming?" moments as the story brilliant pulls back the curtain on major events and players in its story.

Thankfully, despite its more serious tone and some genuinely dramatic and emotional moments which hang heavy upon the series, Steins;Gate never loses its sense of humour as it continues to take time out to make you laugh out loud even in the midst of a crisis - something which the series does unnerringly well despite all the other proverbial balls which is has to juggle.

Overall, that really is the story of Steins;Gate in a nutshell - a series with ambitious and lofty goals, but one that manages to pull off everything it attempts with nary a failure in sight.  One moment you'll be laughing too hard to breathe, the next you'll outright have forgotten to exhale as a dramatic twist punches you in the gut or leaves your head reeling as something which should perhaps already have been obvious becomes clear.  It's an absolute triumph of story-telling that marks this series out as perhaps the must-watch show of 2011; an intelligent effort driven by brilliant characters that never treats you like an idiot or tries your patience with long-winded explanations, preferring to let its story flow and trust in the viewer's ability to keep up.  Even the muted tones and relatively simple character designs and animation ultimately serve to accentuate rather than detract from the story as it unfolds (ignoring the prevalent banding exhibited by the series in its streaming form).

We could probably spend several more paragraphs lavishing praise upon this series (and I probably would were it not for the huge risk of spoilers discussing the second half of this series entails), but I think only one closing comment is required to really bring home just how good it is - if Steins;Gate doesn't get a physical release in the UK, it'll be absolutely criminal.

10
An absolute triumph of intelligent story-telling backed up with great characters - this is perhaps the year's most thrilling and entertaining show, and you'd be a fool to miss it.
COMMENT AND DISCUSS
blog comments powered by Disqus