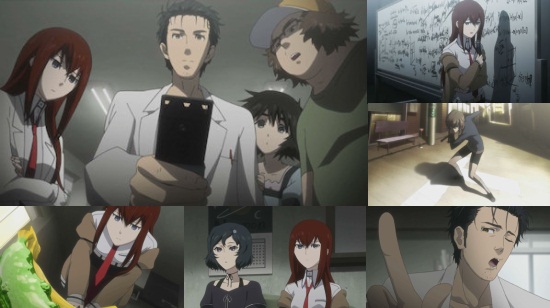 Hououin Kyouma is your typical "mad scientist" - constantly working on innovative yet bizarre inventions within his laboratory alongside his motley crew of assistants, and forever alert to the malicious hand of the shady "Organisation" as it looks to interfere with his work and life.  At least, this is how the protagonist of Steins;Gate, Rintarou Okabe, likes to imagine himself - in truth, he occupies a small apartment above a TV repair shop, hanging out with his childhood friend Mayuri and self-professed hacker Daru without anybody paying him much heed unless he makes too much noise crashing around the place and raising the ire of the proprietor of said TV repair shop.

That said, Okabe does have an impressive line in inventions, and it's his latest masterpiece around which this streaming visual novel adaptation centres - the "time machine microwave", which allows for text messages to be sent to the past.  Needless to say, messing with time itself is a potentially dangerous game, although before we even settle in to the possibilities of such a device and Okabe's circumstances we're treated to some strange and decidedly unsettling occurrences to throw us in at the deep end of the series.  As at least some of the concerns from that opening instalment resolve themselves in unexplained fashion, we're left unsure as to what we're looking during the early part of the series - are we party to Okabe's delusions about his life, or did what we witnessed really happen?  More importantly, who is this mysterious supposed time traveller who calls himself "John Titor", and why does nobody except Okabe remember him from his online exploits at the turn of the millennium?

It's this reference that leads us in to one of the more pleasing aspects of Steins;Gate - the way it links itself in to real-life science and popular culture.  The John Titor phenomenon is only the tip of the iceberg here as his claims and supposed mission are integrated tightly into the series, as CERN's Large Hadron Collider as well as both philosophical and scientific discussions of the practicalities of time travel become commonplace throughout.  The effects of time travel, or even simply sending a message into the past, becomes a frequent focus of the first half of the series as Okabe and his growing band of assistants did deeper into a world of cutting edge science and potential conspiracies, and those effects become ever more marked as the "Future Gadget Lab" come closer and closer to territory that they will ultimately wish they had never meddled in.

Yet, for all of this talk of threat, conspiracy and danger, you'd be hard-pressed to believe that anything is at stake for large chunks of Steins;Gate's first half, as it gleefully follows the shenanigans of Okabe as he roams around largely in a world of his own, somehow managing to collect a teenaged scientific genius named Kurisu Makise and other decidedly interesting characters along the way.  This willingness to delve into the frivolous makes the series slow going in terms of revealing its ultimate direction (which really only starts to become clear as the first half of the show comes to a close in shocking fashion), yet somehow it not only gets away with exhibiting this light-hearted underbelly but is actually enhanced by it.  Not only are the dynamics between various characters absolutely spot-on almost from the off, but this web of relationships is backed up by plenty of razor-sharp dialogue and great one-liners, although you will need to be one of the "cool kids" with regard to your knowledge of Internet memes to really be able to enjoy all of it.

Thanks to these frequent distractions, the impact of important events as they occur is all the more powerful - clues are dropped in to proceedings here and there to keep you thinking and guessing as to a given character's motivations or their true nature, and when something big happens you'll feel the shockwaves of it from the comfort of your own living room.  Every time you find yourself within one of the show's "comfort zones", you can always rest assured that something is just around the corner to shake things up a little.

This leaves us with a combination of attributes that really shouldn't work together - it seems like suicide to mix up Internet memes, the legend of John Titor, science, physics, sci-fi drama and comedy, yet somehow Steins;Gate succeeds in blending all of these elements and coming out the other end of this noxious cocktail as a fantastically entertaining anime work.  When the show is having fun with its characters it can often be hilarious, but when it comes to the crunch it knows how to twist things around to drop your jaw or prise your eyes wide open.  Its particular blend of elements won't be for everybody - its humour in particular will fly over the heads of some while its science will baffle or bore others - but assuming your eyes light up at the mere mention of time travel then what animation studio White Fox have delivered here is a visually striking and assuredly confident series that is almost certainly the best thing to come out of the spring anime season.  The best news of all?  We're only half-way through this particular journey, and with a North American physical release confirmed we hopefully won't even have to build a time machine if we want to watch it all over again in future.

9
Well animated with great character designs, and more importantly a fascinating story that leverages its characters to entertain and intrigue in equal measure - Steins;Gate thus far promises to be one of the year's best.
COMMENT AND DISCUSS
blog comments powered by Disqus