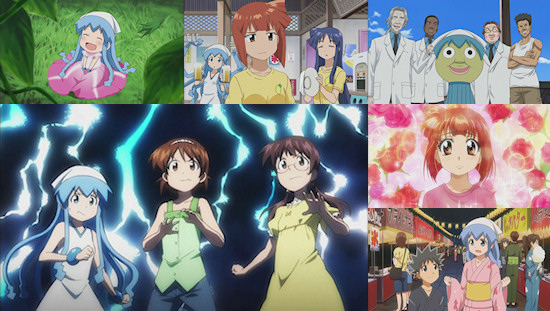 Having reviewed its first season in its entirety as well as the opening episodes of season two, there isn't a lot else left for us to say about Squid Girl - it knows its audience, knows exactly how to position its comedy and characters, and its deployment of three story arcs per episode provides just the right balance to keep the audience's interest while providing something fresh quickly on the off-chance that it has misjudged an arc's comedy value somewhere along the line.

By the end of this second series, Squid Girl continues to steam along with little sign of fatigue - no matter how many invasion plans fail or are forgotten entirely, smiling and laughing at the antics of our titular character here never seem to get old.  The whole thing is backed up with some great, colourful animation throughout and a voice acting cast that seem to be having a ball with their roles - if nothing else, you absolutely must check out episode four's opening gambit which sees Squid Girl and company trying their hand at speaking English with hilarious consequences.

Every now and again however, this series goes out of its way to prove that it has a softer centre beneath its wizened comedy outer shell - cue the re-emergence of the adorable and sweet mini-Squid Girl from series one, and witness the almost heart-rending emotion wrought from an accident Squid Girl has with Takeru's new and much-loved toy.  Admittedly, these attempts to derive emotion from the series don't always work (the final episode tries a little too hard to make for such a finale to the series), but more often than not their effort is as admirable as their pay-off is notable.

Probably the most telling compliment about this second season of Squid Girl is that it would be easy for me to sit here and simply reel off a list of personal highlights as evidence of its, but I'm not going to because it not only would it be lazy writing on my part, it would also threaten to spoil the fun of the ride that this show provides - it's never too difficult to second guess what's coming next in any given scenario, but it's still enjoyable to see it pan out.

If you're looking for a simple, friendly undemanding anime comedy series, then you can't really ask for much more than Squid Girl - it's consistently amusing, always colourful and fun and it doesn't rely on otaku-centric humour or smart-alec references to deliver those elements, meaning that there's no barrier to entry even for newcomers to the world of anime.  In short, provided you can extend your disbelief enough to take the premise of a squid that looks like a human girl with a pinch of salt water, you're all set to enjoy this series - and enjoy it you most likely will as an understated master of its particular craft.

8
Even after twenty-four episodes, this comedy anime is still squidding great.
COMMENT AND DISCUSS
blog comments powered by Disqus