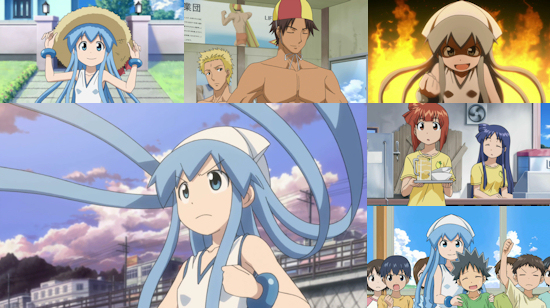 From its roots as an unspectacular manga that garnered little attention, Squid Girl proved to be one of the surprise comedy hits of 2010 - not just with viewers in its native Japan, but also with a wider audience who found much to enjoy in the story of its wannabe invader from the depths of the sea who ends up rather enjoying frolicking with humans and working at a beach-side restaurant.

Thanks to that popularity, Squid Girl returns for a second stint this autumn, and perhaps thankfully little has changed in that intervening period between series.  This means that Squid Girl is still as charmingly ignorant about what goes on in the human world as ever, and it also ensures that the unique foibles of her speech remain intact, allowing in turn for Crunchyroll to plaster their subtitles with plenty of squid-based gags to good effect.

Again in keeping with its initial batch of episodes, each instalment is neatly carved up into three sub-episodes with a different focus - if nothing else, this helps to keep the show's content fresh, as even if a segment which doesn't tickle your funny bone arrives you know it won't be too long before the episode tries a different angle to get you giggling.

Thankfully, Squid Girl's sense of humour remains pretty sharp, with a fair number of laugh out loud moments and occasionally hysterical set pieces - even when it isn't splitting your sides, there's a sense of fun that pervades the entire series which leaves you with a smile on your face as it makes best use of its available roster of characters who have obvious personality traits without ever becoming over-reliant on those tropes.  This sense of fun is backed up by solid voice acting and, more to the point, colourful and generally satisfying animation that not only accompanies the show's comic potential but also accentuates it on occasion when it comes to exploring more slapstick veins of humour.

In truth, there isn't a lot we can say about this second season of Squid Girl - if you watched and enjoyed the first series then there's absolutely no reason not to watch these new episodes as they deliver more of the same without skipping a beat, while those new to the show will probably want to visit that first season before moving on to season two even if there aren't really many prominent points you need to learn to dive in at the deep end with this series.

The lack of anything new to say about Squid Girl might not make for a long review, but it does mean that this series so far is doing everything that we hoped for it - it remains a great slice of light-hearted, fun and often outright funny entertainment packed with lovable characters and daft yet enjoyable set-ups.  In short, it's squidding great.

8
More light-hearted and slightly daft fun and frolics, and we wouldn't have it any other way.
COMMENT AND DISCUSS
blog comments powered by Disqus