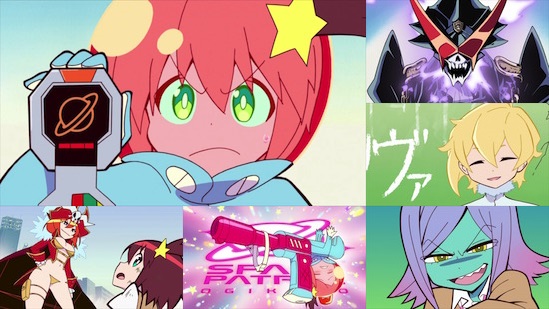 Hiroyuki Imaishi is a man that needs little introduction. Though the name may not be familiar to everyone, chances are most anime fans have had some sort of taste of the Studio Trigger founder’s rather unique sense of humour. From Gurren Lagann and Panty & Stocking with Garterbelt to Kill la Kill, Imaishi’s distinct style has been a talking point among anime fans for many years. Now after a relatively quiet period, Trigger are now back with not just but two original shows for the spring 2016 season. While Kiznaiver is heading things up as the full-length show, Imaishi has been presented with another opportunity to go wild with Space Patrol Luluco - a new sci-fi comedy series comprised of 8 to 10 minute episodes.

Thirteen-year-old Luluco is a schoolgirl who wants as normal a life as possible. However that isn’t so easy for someone living in Ogikubo, a space colonisation zone where alien immigrants from all across the galaxy have come to live. When Luluco’s father eats a pill that freezes him in a block of ice, she takes him to the Space Patrol in the hopes that they’ll be able to help. However, there she is roped into joining the Space Patrol herself, working from within her school to bring down a criminal from inside. Luluco’s attempts at a normal life are shattered as she’s sent on missions to protect Ogikubo, along with her partner and classmate Alpha Omega Nova.

Even when producing over-the-top action projects like Gurren Lagann and Kill la Kill, it was clear that Imaishi has always been most comfortable in a comedic setting. Panty & Stocking is clear evidence of this, and his recent submission to the Japan Animator Expo (entitled Sex & Violence at Mach Speed) showed no signs of him showing any signs of maturity. To suddenly drop from 20-minute long episodes to half that running time might seem like a step-down, but this is perhaps the way his comedy works best – making every second count by not allowing jokes to become too prolonged or repetitive. The humour isn’t especially low-brow, but it is still juvenile enough to not be to everyone’s tastes. Simple gag humour comes in thick and fast, with an equal reliance on dialogue and visual-based jokes. You almost get the sense that the plot is being made up as it goes along, a fact which is directly referenced in one episode by a voiceover announcing (in English no less), “The current episode’s storyboard is under production without a final script.”

In a few short episodes Luluco has managed to build itself an alien-filled world that’s simple yet fascinating, as well as fill it with a varied cast that work well together. Luluco’s relative normality makes her the perfect lead for a show that’s getting progressively sillier, with her reactions to scenarios like transforming into a giant gun or being blasted off into space as adorable as they are amusing. Alpha Omega Nova makes the perfect partner and potential love interest, similarly not buying into the rest of the cast’s insanity but instead remaining completely unphased by it all - an impressive feat when the other characters include a criminal app-developer, a police chief with a flaming skull and a space pirate.

Visually Space Patrol Luluco is a delight, carrying on Imaishi’s distinct Western-inspired character designs he previously showed off in Panty & Stocking. The aesthetic helps to convey the show’s light-hearted tone all the more, combining it with bright pastel colours to make it stand out all the more. It’s a style that could easily be dismissed as simplistic, but actually carries its detail and ingenuity in how distinct it is. The series is also filled with references to both Imaishi and Trigger’s previous works for keen-eyed/eared viewers, ranging from the visual references (like Chief Over Justice’s obvious Inferno Cop influences), to audio (Mayumi Shintani voicing Midori, having previously appeared as Nonon in Kill la Kill and Haruka in FLCL) and the far more obscure (Alpha Omega Nova’s similarity to Imaishi’s early concept art for Panty, which in turn seems to be inspired by Gurren Lagann’s Viral).

Space Patrol Luluco isn’t a series that’s reinventing the wheel or likely to pick up as much attention as some of Trigger or Imaishi’s previous works - however, fans will know exactly what they’re getting themselves into. As for newcomers?  Here you have a colourful, bombastic show that takes absolutely nothing seriously and could honestly go anywhere. Expect nothing except a whole lot of laughs and you’ll be right at home.

You can currently watch Space Patrol Luluco in streaming form on Crunchyroll.

8
Though nothing groundbreaking, this is another hilarious except from the mad mind of Trigger’s co-founder.
COMMENT AND DISCUSS
blog comments powered by Disqus