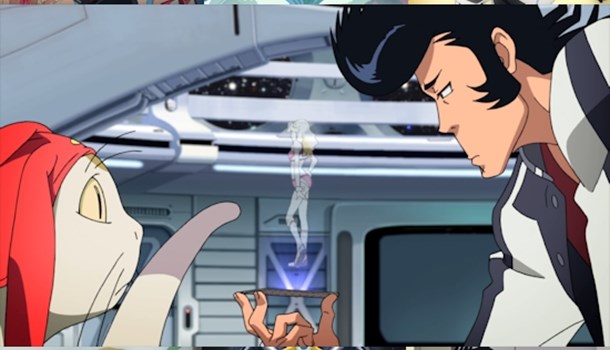 Commentators have, for longer than we care to remember, been ruminating about the "death of anime", or at least a dearth of true creativity within it - an opinion that is easy to back up if you simply point to the never-ending flood of two-bit manga and light novel adaptations that make up every new season of anime. However, for all of those less glowing examples of what the medium is used for, there are also stars of originality that shine brightly as examples of everything that anime is capable of offering in a single package, and in recent years there can be few more striking examples of this willingness to experiment and do something different than Space Dandy. Helmed by Shinichiro Watanabe of Cowboy Bebop fame as the overall series director, Space Dandy is Studio BONES' very deliberate attempt to bring together as many of anime's brightest animation and directorial talents as they can and offer them a playground to ostensibly do whatever they like.

The source of that playground? An imagined universe packed with alien (and human, of course) life, and fronted by a wandering alien hunter constantly on the look-out for rare aliens that might make him is fortune. That man is Dandy, and together with his rather unreliable robot companion QT and newcomer to the crew, Betelgeusian (and definitely not a cat) Meow, the stage is set for two entire series of crazy space-faring adventures.

That premise is almost literally as far as the series ventures in terms of an over-arching narrative - yes, Dandy is being pursued by the evil Dr. Gel on behalf of his overlord Admiral Perry for reasons that are never revealed (in this first series, at least), but beyond this every single story which occurs in the universe is entirely self-contained within its own right. If you don't believe us, then episode one will soon set you straight - it begins by breaking the fourth wall and ends by breaking... well, pretty much everything.

This ability to play in the universe at will without any real rules to speak of gives the individual episode directors for each instalment a free reign to do whatever they like, and it's a freedom which is often used to its fullest - as we've just mentioned, episode one plays with this freedom with an almost child-like glee, and subsequent episodes take a zombie apocalypse through to its natural conclusion or go hunting for ramen from another dimension, all in the name of great comedy. If you're looking for an easy frame of reference, then Red Dwarf might not be too far off the mark in this regard.

Not that Space Dandy simply plays for laughs - yes, humour is its primary goal and weapon as it romps across galaxy after galaxy, but the freedom afforded its staff also allows it to shift gears at will, bringing us a touching tale of a troublesome alien child all alone in the world or a trip to Meow's home planet which has some very heartfelt things to say, while other episodes dive head-first into outright weirdness with an abstract tale of plants with an equally unusual art style to match.

Admittedly some of these more unusual stories can be tough going from a viewer's perspective and stand out as some of the least entertaining fare within the series, but such moments are rare in the midst of a show that always feels like it's having a whole lot of fun, yet still manages to ensure that its comedy and stories are well-paced and smartly timed for maximum impact. Every episode will muster something to keep you engaged, whether it's big laughs, a dose of outright lunacy, a well-told story or simply some jaw-dropping animation and its wonderful soundtrack - it all combines to give you a feeling that Space Dandy is a real treat for the senses, and despite its episodic nature it's when you look at this first season as a complete package that you realise just how impressive the entire endeavour is.

Having mentioned Space Dandy's animation quality a couple of times now, we really have to discuss it in more detail because, quite simply, it's phenomenal. Save for a few off-model moments scattered across the series, you'll be hard pressed to find a better looking TV anime series in recent years - every episode is a riot of colour, striking character and craft designs and fantastically energetic, fluid animation. Indeed, if you're interested in animation as a whole then this series is a must-watch, containing as it does a broad range of styles and techniques fostered by the open and experimental nature of the project which makes each episode a feast for the eyes. This also ensures that Space Dandy is a series that must be experienced on Blu-ray with no excuses to see it in all of its colourful High Definition glory, and thankfully the Blu-ray transfer for this UK release is flawless and easily one of the best we've seen for a TV anime series on our shores - we really can't praise it enough.

In fact, this Collector's Edition package as a whole is a thing of beauty - its outer box art captures the show's character perfectly, and the included 200-page book contains a vast wealth of character and location designs as well as plenty of ancillary information right down to an exhaustive discussion of the currency of Space Dandy's world, and even its varieties of ramen! Throw in a section showing the series Japanese Blu-ray volume artwork, which admittedly feels like a "this is what you could have won" segment given how great most of it looks but is a welcome addition nonetheless, and you have everything you could ask for as a companion piece to one of the most vital works we've seen in a while. Some might be less enamoured of the Amaray case within the collector's box, but it's functional and itself features a reversible sleeve to give you a couple of designs to choose from.

Finally, we should give mention to the English dub for the series, which has been the subject of much praise during its availability when the series was first broadcast and streamed. In terms of voice acting and performance it certainly is one of the better dubs you'll find around - its casting is pitch-perfect and the cast give their all to make each episode work to the best of their ability. However, some of the scripts provided to the cast are... well, a bit obnoxious, with extra (and often crass) gags inserted throughout episodes alongside translations of the existing ones to unnecessarily pack in more laughs and thus imbalance that measured sense of comic timing and pacing we mentioned earlier. Some will doubtless prefer this take on the series which has been localised in every sense of the world, but personally we'd advise you stick with the Japanese language track, at least to get a feel for the more restrained writing of the original treatment. Or, of course, you could plump for the other included language track, and marvel at what it's like to see Meow talking in French...

Taken as a whole, this UK release of Space Dandy's first set of adventures is a thing of beauty indeed - if anything, squeezing the series into concentrated viewing sessions rather than weekly streaming broadcasts really allows you to appreciate the ambition of what it sets out to do and the freedom afforded the staff, and even though some of its episodes falter in terms of pure entertainment the series never ceases to be fascinating to watch. It's a fascination that carries through to the included art book, allowing you to appreciate the skill and detail afforded a series that is, ultimately, so much more than just another "fire and forget" comedy show.

Thus, if you have any kind of interest in the animation aspect of anime then Space Dandy is a must-watch series and this Collector's Edition a must-have that is best of its kind from Anime Limited thus far; even if you don't have such an interest, there's still more than enough well-realised comedy hijinks contained here to make Space Dandy a fun viewing experience from beginning to end.

8
A stunning Blu-ray transfer and excellent art book ensures that Space Dandy gets exactly the treatment it deserves as a fascinating but fun free-form comedy.
LATEST REVIEWS
Girls' Last Tour