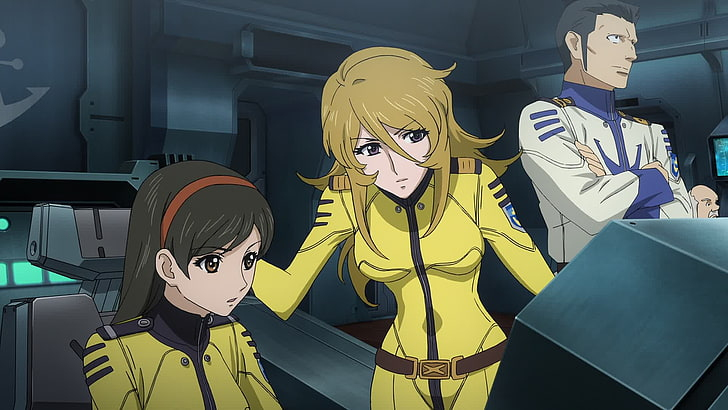 OK folks, here’s a brief history lesson for you. In 1979 a new anime series began broadcasting on US television under the name Starblazers, following the adventures of Captain Avatar (played, amusingly, by a gentleman called Gordon Ramsey) and the Battleship Argo and it proved to be pretty popular thanks to is ongoing, arc-based storyline. This which was pretty rare in animation brought to the West at the time. The origin of that series was of course 1974’s Space Battleship Yamato directed by the legendary Leiji Matsumoto. Then in 2012 a remake of the original was announced under the title Space Battleship Yamato 2199 (though the US release still hangs on to the Starblazers name) which is now finally seeing a release on our shores, no doubt to the annoyance of many of the series fans who have been diligently importing the English-subtitled Japanese Blu-ray releases over the past few years. We know at least a couple of fans who have spent well over £400 to acquire these so if nothing else you can be assured on a good saving on the set now that it’s finally available here! For them and many of the fans who have waited the series is clearly well worth it. But for the rest of us will the Yamato sail onto victory or sink down to the depths of...er...space?

Humanity is on it’s last legs as the Earth is being devastated by attacks from an alien race known as the Gamilans who are bombarding the Earth and terraforming the planet itself! A fragile hope still exists however as a message has been received from the far-distant planet Iscandar which has offered Earth a chance. Iscandar will grant the secret of faster than light travel so that mankind can reach Iscandar to acquire a way to reverse the damage which has been done.

To seize this chance Earth enacts the "Yamato" plan and secretly refits an old battleship into a spacecraft, equipping it with the best weapons and crew that can be found. These chosen few must now head through unknown perils into reaches of space where no man has gone before, using alien technology in the hope that Earth can indeed be saved!

Yamato’s biggest strength is unquestionably the visuals. The Yamato itself has always been an evocative design, even back in World War II - seeing it flying through space blasting laser cannons never gets old thanks to the brilliant CGI. The animation and character design are top-notch too, although one or two character designs haven’t quite been updated enough and look a bit out of place (we’re looking at you Doc). Indeed, you’d be hard pressed to find more than a few frames of animation you wouldn’t be happy to mount and hang on the wall!

Similarly the audio design and music are fantastic filling the show with sonorous male choruses, blasting engines and laser battles.

Unfortunately things start to go south from here for Yamato because it suffers pretty badly in terms of it’s story and pacing. Now on one hand some of this was a bit inevitable and it’s not exactly Yamato’s fault. It is a remake of a very old show after all and a lot of the characters and plot are lifted straight from the original. The thing is though that in the intervening years Yamato has served as a big inspiration for dozens of other shows, from Macross to Gundam, all of which have plundered it’s tropes and ideas to some extent. These shows have also been updating and modernising these concepts for the most part and it’s not hard to look at say, Martian Successor Nadesico and see a lot of the same ideas that work far better than the inspiration. Now the remake just feels old-fashioned, clunky and full of stereotype characters who don’t really give you any hooks to engage with them.

Even when taken on it’s own merits there are issues. The series is far too long for a start and just doesn’t have enough plot to really justify it’s run time, making it feel like little more then filler material for the most part. The Yamato seems to be near constantly crashing onto a planet for repairs! Even at they end they can’t seem to stop - just when you think everything has been wrapped up the show starts up again for another two episodes which don’t really serve any purpose other than to extend the run time. The series desperately needed to be chopped down to a 12-13 episode run, which would have made everything work so much better. As it is the plot holes just become really apparent – why couldn’t Iscandar have sent the technology the Yamato is going to collect? How could a dimensional submarine even work? How can the Yamato leave an atmosphere without having all its spindly radars etc smashed off? Why would a ship like the Yamato bother to stock the amount of red paint they’d need to keep repainting the hull after every battle? If the Yamato’s weapons are so powerful why did mankind start to loose the war?

It’s a shame too as I was really looking forward to Yamato, it looked fantastic and the hype was colossal. If you want something pretty on in the background then you could certainly do worse than this but in the long run you’d be better off spending the cash on the excellent live action version from 2010 and the best scale model of the Yamato you can afford!

6
It looks incredible from a distance but it's one dimensional when examined up close.
COMMENT AND DISCUSS
blog comments powered by Disqus