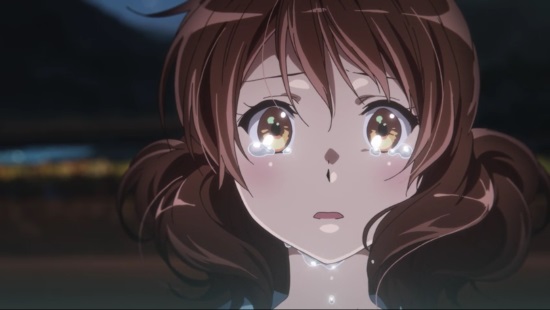 After their junior high school concert band fails to make it past the finals of the concert band competition euphonium player Kumiko alienates fellow band member and trumpeter Reina when she questions whether Reina thought the band was actually good enough to have gone on to the next round.

Moving on up to high school Kumiko attempts to draw a line under her life at junior high, but alongside new classmates Hazuki & Midori she finds herself drawn to her new schools concert band club where it turns out that Reina has moved to this school as well and is also joining the club!

Can Kumiko rebuild her friendship with Reina? And can the band club come together to perform at a level that will win them competitions? Or will they implode before reaching their first public performance?

If you pushed me to find one word to describe this first season of Sound! Euphonium I think it would have to be “charming”. I’ve never been one for slice of life shows, and doubly so anything that involves high school clubs, but damnit if this series doesn’t hit you right in the feels. The core quartet of Kumiko, Reina, Hazuki & Sapphire/Midori are kind of adorable in the way that each is something of a mess, trying to navigate high school and just who it is they want to be in spite of their own foibles. And the rest of the cast (from what we are shown) are an engaging bunch of personalities as well with more than a few bringing their own baggage that starts to cause drama as the show progresses.

Over the course of the 13 episodes presented here we get to see the Kitauji High School concert band club come together with an influx of fresh blood from the new 1st year intake, decide if they want to be just “fun” or if they actually want to put in the work to compete with other bands in the district, and the challenges this forces the students to overcome. My word though it certainly does the job well. There’s a real sense of success  when the club comes together for their first public performance at the end of the first disc in a display of marching bands from various schools, and it’s a real fist-pump moment when the audience watching the bands start getting enthusiastically involved in the under-dogs performance. This is also a good point to mention the silky smooth & crisp animation. The show is generally gorgeous but it’s one thing to animate a band sitting down and playing, and something else entirely to do all the little things as well as a marching band performance. Couple with the excellent music (and it’s a credit to the production that throughout the pieces that are played that no performance comes across exactly the same) and it’s just sublime. A night-time duet later in the series is particularly striking for the quality of the piece and the emotion in play with the two characters.

But there is also a sense of melancholy to proceedings, particularly when upperclassman Aoi drops out of the club as she can’t maintain the necessary level of practice whilst attending cram school, and when some of the 2nd and 3rd years have to come to terms with potentially missing out on performances as the club moves to offering members positions based on ability over tenure when there are limited spaces. It’s fascinating to see how the show handles emotions spiking and members who had expected to get performance opportunities as that was how the system had always worked before, have to now up their game as the club re-orientates to be able to compete at a higher, more consistent level.

I didn’t know until I was doing some additional research for this review that I hadn’t realised, that this show is actually based on a light novel series (The first volume is available in English - Ed). I find that fascinating because so much of the show I’ve been watching is tied to the music, and I wonder how much of that is unique to the show and how much was a part of the novels. Or if it was a conscious decision to let the books be their own thing and the animation hone in on gorgeous visuals and sumptuous sounds? Either way the result is incredibly engrossing.

Each disc includes a set of OVA’s: on Disk 1 these are comedic conversations between the girls over a lunch break that are funny but not essential, whilst on Disc 2 they are somewhat more substantial as they follow the members of the band who were not picked for the completion as they go about helping in the prep and logistics of getting the band to the regional contest, as well as ways they come up with to show the band their support, and provide a neat insight into characters who fell somewhat to the wayside during the main series.

Otherwise extras include the usual clean opening & closing sequences, and audio options of Japanese 2.0 with subtitles only – no dub available in this set.

8
Overall then this was a thoroughly entertaining series that I would heartily recommend to anyone who wants a show that looks and sounds great with stakes that, whilst not earth shattering, are important to the characters and matter to them. Also, who doesn’t love some big band tunes?
COMMENT AND DISCUSS
blog comments powered by Disqus