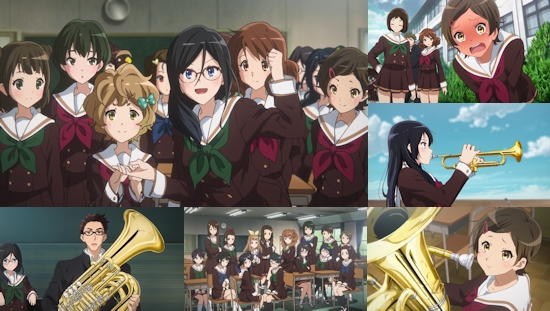 When Kyoto Animation announced that they would be working on an anime adaptation of novel series Sound! Euphonium, the obvious assumption made by many that this was simply "K-ON Mark II" - replace light music with a concert band, and there you have it. Take a look at the opening credits to this series and you may be further persuaded that this is the logical conclusion to make - not only are the make-up of parts of this opening animation similar to K-ON's first series, they're practically identical.

However, you remember how your parents always taught you not to judge a book by its cover? Well, they were talking about Sound! Euphonium. Probably.

Even the opening scenes of the show gives us an early suggestion that this series has a deeper pool of human emotion to delve within, as we witness our protagonist Kumiko Omae shrugging off the failure of her middle school concert band in a competition - after all, they'd done well enough to receive to receive a "dud gold" award, even if they'd missed out on actual qualification for the national tournament. By contrast, fellow band member Reina Kousaka is reduced to tears by this result, and what's more she finds Kumiko's nondescript response to elimination disgraceful.

It's an awkward moment that follows Kumiko through to the "proper" start of the series, and with it her life as a high school student - she doesn't really have any interest in joining the concert band at her new school (not least on account of that tricky experience still fresh in her memory), and the fact that a demonstration undertaken on the first day by the band sounds terrible doesn't exactly convince her.

However, Kumiko finds herself making a couple of friends in the new class, and much to her dismay both of them are interested in joining the concert band as their choice of after-school club - Sapphire (or Midori as she prefers to known) is already an accomplished contrabass player, while Hazuki has no musical experience but decides that it seems like a fun thing to do and is happy to throw her hat into the ring as a result.

When a visit to the club room convinces these two further, Kumiko caves and joins the band along with her two friends, and later finds her desire to play a different instrument similarly collapsing in deference to taking the path of least resistance and picking up the euphonium that she played in middle school once again.

This is normally the point where you'd expect a typical slice-of-life show to devolve into comedy revolving around the main cast's daily lives, and while there certainly are such entertaining moments to be found throughout these early episode, there is trouble in this particular musical paradise. For starters, there's some obvious friction between various groups within the band - some see this after-school club as a fun way to pass the time after school while others want to take it seriously at see the once-prestigious school competing with the best in the country. Even within each instrument group, some individuals are apathetic while others give it their all at every turn, and things only get all the more fraught on account of the club's taciturn advisor who has little time for anyone not willing to put the effort in.

This, ultimately, is the big picture within Sound! Euphonium's story - Kumiko is (initially at least) the kind of girl content to drift through her life avoiding conflict and following the herd so as not to stand out or cause any trouble, while others wear their hearts on the sleeve and will do anything when it comes to realising their goals or engaging with their passion. By the end of episode four, we are perhaps seeing the slightest of changes in Kumiko's demeanour, and it seems logical to assume that her growth - and that of the concert band as they coalesce into a whole greater than its parts - will be what drives the story forward in terms of both narrative and character development.

No matter what direction it ultimately takes, the series has certainly been enjoyable so far. Kumiko makes for a refreshingly realistic lead for a show of this type - a normal, grounded girl with realistic hang-ups and none of the simple archetypes commonly associated with female characters - while the rest of the cast have more than enough personality to stand-out and bring plenty of more traditional anime character types to the table. Meanwhile, the arc of the story so far has also been entertaining in its own right, taking us through the formative days of the concert band with a well-paced mixture of introducing the characters, instruments and scenario without needing to dump swathes of facts upon the viewer. When you add all of these elements together, there's a subtlety to the presentation of both character and story that Kyoto Animation have proved capable of in the past, so although it's no surprise to see it brought to the fore here it is nonetheless noteworthy as one of the reasons why Sound! Euphonium works so well.

In a similar vein, it won't shock you to hear that this show's animation is sumptuous - loose and expressive when it needs to be to bring out a moment of comedy or surprise, but incredibly detailed when it comes to bringing its setting to life. The sheer detail lavished upon the show's instruments and related paraphenalia and the way they're handled alone is particularly astounding, giving weight (both literal and figurative) to their presence. Given that this is a show where the girls don't learn to play their instruments to a degree of incredible precision within two minutes, the almost imposing presence of some of the larger instruments accompanies this more realistic peek in on an after-school club perfectly. It's a sense also helped along by the show's character designs - they're attractive in the studio's typical style, but also feel grounded in reality, with no crazy hairstyles or colours to speak of.

Overall then, this is a most enjoyable introduction to Sound! Euphonium - it clearly has a lot of story still to tell and much about its characters to explore, so we'll be keeping a keen eye on how it ultimately pans out, but the series is nonetheless off to a wonderful start. A gorgeous series with well-crafted characters and plot that exceeds the typical expectations of this genre makes it one of the spring's must-watch shows at this genre - it might not be "another K-ON" but will probably appeal to fans of that franchise just as easily as those looking for something a little more considered and dramatic within a high school setting.

You can currently watch Sound! Euphonium in streaming form on Crunchyroll.

8
A series of stunning visual detail accompanying smart characterisation and story-telling so far marks this out as a show to watch for the spring.
COMMENT AND DISCUSS
blog comments powered by Disqus