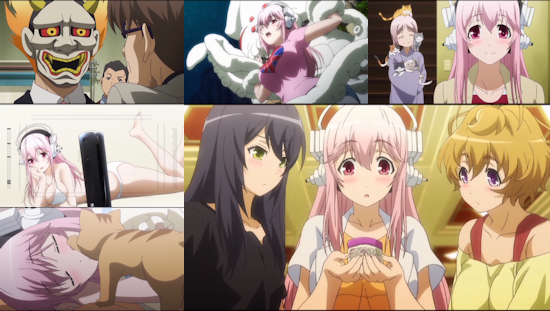 In the midst of all of the anime born of manga, light novels and video games, the animated debut of Super Sonico is a decidedly unique one - how did a mascot character designed for a music festival held by game (and more specifically visual novel) publisher Nitroplus almost a decade ago come to receive her own series? Well, if we're being entirely honest her ample bosom and impressive figure probably has more than a little to do with it, and since her debut as a mascot Super Sonico has been the centre of a slew of figures and merchandise, which in turn brings us to this 2014 series from White Fox.

In a not particularly interesting turn of events, it just so happens that young Miss Sonico (the series makes clear that Super Sonico isn't a pseudonym but her actual name - first name Sonico, family name Super; we aren't super if this means she's related to Superman) is proficient at almost everything that she touches - loved and recognised by everyone in her town, she's an ace student in marine biology, a fantastic guitarist and singer for a band named First Astronomical Velocity and a stunning gravure model. Is there anything that Super Sonico can't do? Well, she's a little shy, and she isn't a morning person, but that's about the limit to any flaws in her personality.

That's pretty much all you can expect in terms of character development from this series, which follows Super Sonico through her jam-packed daily life - one minute she's modelling the skimpiest bikini imaginable, the next she's rocking out on stage, and there are plenty of other things going on as she goes about her business. Not that Sonico is alone, mind you... her manager as a model is literally a guy who incessantly wears a demon mask, she has a couple of band mates who accompany her on that particular journey, and there are no shortage of others who she can call on in times of need, including a growing bevvy of adorable cats.

All of this means that Soni-Ani has plenty of scope for its largely episodic adventures, from murder-mysteries and zombie attacks on the one hand through to school festivals and photo shoots on the other. To be frank, a lot of this fare is really rather forgettable - as we've already mentioned, there's no hidden depth or progression to the show's characters, and many of its attempts at comedy or drama are either low-key or a little forced. This isn't a series to go to for a rich narrative then, but that probably goes without saying.

There are, however, some hidden gems tucked away in the midst of the series. One episode, where Sonico is followed by a journalist compiling an article on her as a local model, takes a rather pointed turn as it shifts its attentions to the journalist rather than Sonico herself, giving us a peek into a career of unresolved creative frustrations that has some real heart to it; another, where Sonico takes a brief vacation alone, almost serves as an episode of so-called "iyashikei" (or "healing") anime as it quietly follows our lead character just making her own little journey of discovery, meeting people and seeing new things along the way. We're left wishing that there was more of this kind of fare contained within the series, as it shows exactly what you can do with an open-ended concept such as this one - imagine an entire series packed with these entertaining, thoughtful little vignettes? Sadly, such moments are the exception rather than the rule, but it's nice to see them making themselves known here and there.

Beyond these standout moments, we can't be too harsh on Son-Ani - forgettable it may be, but it can still entertain in the moment, whether it's the way it leans into the sillier aspects of its premise or even the way it ignores some of those aspects entirely (just why does Sonico never remove her headphones?) In other words, it's a show that's having fun while also doing its duty in trying to promote sales by lots of lingering shots on the bosoms and forms of the female cast, and you can't really begrudge it that given that it makes a decent fist of all of those things.

On that note, Soni-Ani both looks and sounds the part - its animation quality is variable but mostly works well, and sports some occasionally excellent CG-rendered music videos to end each episode, some of which are great to watch (and listen to) in their own right before we even mention the terrifying ear-worm that is the show's opening theme. The show has its doses of fan service without ever going too far unless you're allergic to overbearing jiggle physics, and generally the series looks "nice" as a whole - "nice" being a mild compliment that sums up the show as a whole pretty well.

Another notable element of this release comes in terms of its localisation, which features prominent cosplayer Jessica Nigri as the voice of Sonico herself. While this sounds like the kind of marketing gimmick that could go horrendously wrong in the recording booth, it has to be said that the English dub is competent throughout - Nigri fits in well with the rest of the cast and pulls off Sonico's role decently enough, and although the dub gets a little "shrieky" at times it mostly sits snugly in line with the tone of the show itself. The English cast also provide a host of extras for this release, including bloopers and outtakes, trailers and commercials. If the English dub isn't your cup of tea of course, the original Japanese track is also present, correct and enjoyable.

To conclude then, Soni-Ani is a curiosity - a series created from a decidedly unusual source, which has led to an anime which is both equally unusual in some senses yet utterly by the numbers at others. As a fun little distraction to while away a few hours you could certainly do worse than this series, but then again if you're looking for either fan service or gentler slice of life fare there are similarly much better shows available. For fans of Super Sonico herself, this seems like a series that does her character justice, but beyond that this may be a tougher sell.

6
Some stand-out moments show what this series is capable of, but these occasions are few and far between in what is otherwise a pleasant, fun but unremarkable series.
COMMENT AND DISCUSS
blog comments powered by Disqus