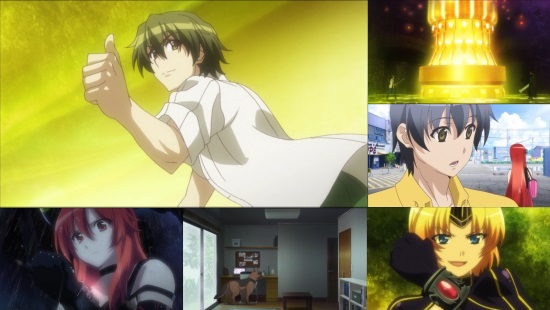 After a chance encounter with a mysterious girl outside his house, Ryosuke Kaga's whole life gets turned upside down. Forced into a contract with said girl, Ryosuke must provide her with the energy she needs in order to stay in the human world so that she can find a person who is capable of creating an even larger amount of energy. The girl in question, Lisara, is a grim reaper from another world called Grimswald, a realm full of people who survive on the energy of humans. Luckily for Lisara, Ryosuke is able to provide her with the energy she needs... by channeling his pervertedness. Thus Lisara begrudgingly uses this ill-mannered energy in order to fulfil her goal of finding someone who is able to create a large amount of energy in order to solve a crisis Grimswald is facing.

To start with, So I Can't Play H bills itself as a monster of the week series mixed with a harem comedy. Each episode follows a set pattern of Lisara and Ryosuke attempting to investigate rumours of special people within their high school in the hopes that this person will be the one Lisara is looking for. While this happens, the duo randomly gets attacked by monsters that come from Lisara's world. These action scenes are pretty standard for the genre, with Lisara able to produce a scythe out of nowhere and conjure up flames to attack with, while other characters that join the show's cast have their own unique weapons and elemental attacks.

The series tries to give a bit of character to these skirmishes by having each battle take place in specially created barriers that the characters in the show can create using magic. This area allows the characters to go all-out when fighting without causing collateral damage and without being noticed by innocent bystanders, thus allowing the characters to battle in the real world without drawing unnecessary attention - a rather convenient thing as most of the battles in the series fall into a rather predictable routine: monster shows up, Lisara fights it and is overpowered; she loses energy which also makes her lose most of her clothing; Ryosuke charges her energy using his perversion; Lisara gets the energy she needs and is able to defeat the monster. While not outright bad, it does make battles a rather dull and predictable affair where the outcome always feels certain. One element of the battles which will really divide opinion is the necessity for Lisara to constantly lose her clothing during these fights. Granted, it helps Ryosuke and his perversion, but at the same time it reduces the value of Lisara's character in these scenes due to her being in rather compromising positions at times. This can make some of the fights painful to watch due to the amount of punishment Lisara receives before getting the energy she needs to turn the tables. While slightly off-putting at times, it does at least fit in with the tone of the show and considering what the series initially bills itself to be, this is rather expected. That said, this is not even the worst aspect on show...

The biggest detractor from the various battles is that when the barrier spell is used, it changes how the show looks. Battles take place in a closed space where the background has a colour filter on it - a bright yellow and green with blurred edges around the borders. Since battles are over quickly this doesn't really cause that much irritation, at least at first. but the problem stems from the fact that by the time we reach the halfway point of the show this filter is always on. This makes the series very hard to look at - Aater watching the full second half in one sitting my eyes felt really tired and strained due to how unpleasant the background colours are. The series has been released on DVD alone, using American masters in 60Hz NTSC. This is probably one of the few instances where a DVD-only release will suffice, as the show itself isn't that great looking art wise or in terms of its animation, and that pesky filter used in the battles and most of the episodes obscures most of the background art, meaning that most of the time only the characters are in clear view. The encoding of this DVD release does the job well enough to show the right amount of detail necessary, although it should be noted that since the series is also subtitle-only all of these subtitles are "hard subs" that are a part of the video file itself rather than a selectable menu option. This is a bit of a problem for those who understand Japanese well enough to watch without subtitles, but since there is no dub for the show most viewers will keep these subtitles on anyway.

Other than the action, So I Can't Play H feels like a show of two halves -  the first being a light-hearted harem comedy revolving around Ryosuke's pervertedness and his involvement with Lisara in hunting for the person they're looking for. The other, however, feels like a more dramatic and dark story that deals mainly with loss, acceptance of death and interpersonal relationships. This second half really feels at odds with the first for several reasons. Beyond that background filter making the second half of the show harder to watch on a visual level, this second half of the series also comes out of nowhere, without any sort of lead-in other than a few lines of dialogue in the first half that is completely forgotten about until that point. While the first half of the show is a completely serviceable fan service comedy action series, the second half really loses its charm and feels really hollow with regards to how it tries to make the viewer care about the cast. If the series started out in this manner by developing the characters in the right way and giving a proper lead into what happens within the last set of episodes, it would have been a much better show. But for what it is, we're left with a rather standard harem fan service show with action that has then decided to bite off more than it can chew.

In closing then, So I Can't Play H is a serviceable harem action show with copious amounts of fan service, let down by its terrible background visuals throughout its second half. The dramatic finale feels like it should have had more impact, but just ends up falling flat, leaving us with a decent show for what it is, but rather forgettable.

5
A decent supernatural fan service show, but with nothing very memorable about it.
COMMENT AND DISCUSS
blog comments powered by Disqus