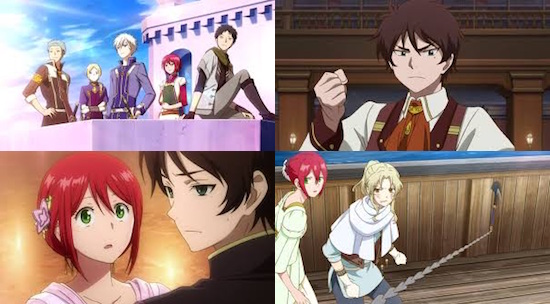 Here at UK Anime Network we found Season one of Snow White with the Red Hair to be somewhat pedestrian in nature, albeit with some tantalising teasers that the story could be more meaningful. Our very own Anime Editor suggested he had “a naive hope, that the whole first series is simply setting the groundwork of better things to come.” With this in mind, I tuned in with trepidation - was it going to be another meandering love story or was there going to be more action?

The story of the blossoming romance between the young herbalist, Shirayuki, and her prince charming, Zen continues to be told in season 2. The tale begins in the grounds of Clarines castle, with everyone continuing with their daily lives. However, with the return of a familiar face and an invitation from Tanbarun, things are about to change and Shirayuki’s fairy tale happily ever after looks to be in jeopardy.

To thank Shirayuki for the advice she gave to him during his visit to Clarines, Prince Raj has invited her to spend a week at Castle Shenizard in Tanbarun. With the invitation accepted, Shirayuki believes that the worst of her troubles are learning how to dance. Little does Shirayuki realise that her lack of dancing skills is going to be the least of her worries.

The return of Mihaya to Clarines leads to the revelation that a mysterious boy is looking for ‘Red’ and that Shirayuki could be in danger. With Shirayuki accompanied by Obi on her way to Tanbarun, Prince Zen continues to investigate the mysterious boy and why he is so keen to find her. Being unable to capture the boy before he finds out that Shirayuki is in Tanbarun, this leads to Zen defying his older brother and setting off to rescue his sweetheart.

Naturally, Zen arrives too late and Shirayuki has already been kidnapped. Shirayuki eventually ends up in the hands of the Claw of the Sea pirates. This leads to some amazing and well animated fight scenes. Once safely back in the arms of her prince, there is a final surprise for Shirayuki and it becomes clear that the mysterious boy was well intentioned after all.

Like season 1, the basic premise is to explore the relationship between Zen and Shirayuki. However, the relationship between Shirayuki and other characters, such as Raj, also gets explored in greater detail. Throughout the series you are able to get a deep understanding of the impact Shirayuki has on the people around her and can really see different relationships developing. One thing that the second season allows us to do is to become more familiar with other characters such as Kiki, Mitshuhide and Obi. In particular, Obi has gone from a background character, who arguably could have easily disappeared after several episodes, into an important supporting role. Obi, as a character is extremely interesting, he is conscientious and good at his job, however he still has a fun side to him. It is also clear that he is very fond of Shirayuki.

The animation, just like in the first season, is exquisite. Snow White with the Red Hair is a beautiful anime to watch. The dance scenes, and for that matter movements of any kind, are fluid and full of expression. Attention to detail has been given to every part of this anime from the landscape to the clothes the characters are wearing. The animation is supported brilliantly by the well-chosen orchestral background music.

Overall, there is nothing to dislike about Snow White with Red Hair. The animation is clearly top quality, and the series is worth watching for that alone. For those of you who love fairy tales and happily ever afters, this is certainly the series for you.

8
The perfect anime for those who love fairy tales.
COMMENT AND DISCUSS
blog comments powered by Disqus