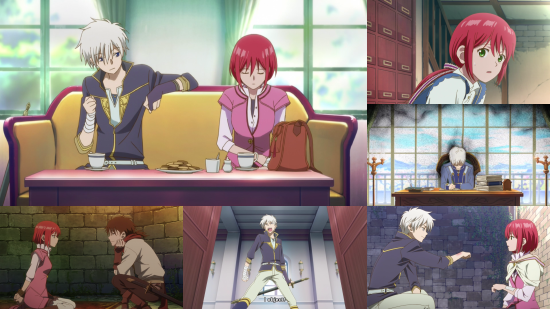 I have a thing for redheads, and it is becoming more and more evident that a lot of anime producers and character designers also share this fascination. Redheads in anime tend to be strong willed, fiery and cute heroines - for example, Yona (Yona of the Dawn), Kallen (Code Geass) and Maoyuu (Maoyuu Yuu Yusha). All of these characters are some of my favourites and they are excellent examples of leading women in anime.

As the title suggests, Snow White with the Red Hair has another colourfully-endowed heroine - however this anime is not a fairy tale, and thankfully, no dwarves are involved (at least, I haven’t seen any so far). Our heroine, Shirayuki, is a young herbalist (think apothecary-cum-pharmacist) who lives on her own running her own business. Although a date isn’t specified, the series is set in a pseudo pre-industrial feudal society where the commoners are ruled over by aristocrats living in small kingdoms. Through no fault of her own Shirayuki, with her long vibrantly red hair, attracts the attention of her local Prince Raj, a despot whose vanity matches that of the Evil Queen from the Grimm Snow White tales (seriously, right down to the magical mirror fascination). His interest in Shirayuki is simply because he is fascinated with her hair, but when Shirayuki refuses to be "his" property, things quickly turn sour as she is forced to leave her town and shop, escaping out of the country.

Fate has a peculiar way of panning out, and this exodus for the red-haired beauty turns into an opportunity for her to grow and to set herself up in a country of higher calibre. It also helps that, in a rare twist for an anime, the prince of said country, Zen, almost lands right on top of her when jumping from a high wall - having noticed the fair maiden, he damn near kills himself during the landing to avoid ending up in a lewd position. Thankfully, as a herbalist, Shirayuki is able to help the young Zen and this is how the two meet. What begins as a fated accident grows into a strong friendship, which sees Shirayuki developing herself to become an apprentice court herbalist in Prince Zen’s palace, thus earning herself a new role and position in this strange new country. Shirayuki wants to be independent; she wants to make the most of herself and this confidence and drive is actually highly refreshing. Watching her grow even in these first episodes put a huge smile on my face.

Unfortunately for Shirayuki, her unique selling point continues to attract the wrong type of men and the wrong kind of attention, which leads her into situations (kidnapping, drugging, and general abuse) that requires her to use Zen’s abilities and position in society to, well, rescue her, when her attempts to fight back prove to be ineffective at times (though she does have a rather nifty means of escape from a dungeon).

I appreciate that a lot of this writing is a means to ensure that Shirayuki and Zen stay together as it’s quite evident that he is meant to be her Prince Charming. However, what remains to be seen is how, or whether, Shirayuki actually achieves her independence of Zen while at the same time remaining with him. The last thing I want to see is her personality reduced and turned into just another female love interest. I want her to kick arse with her medical skills, botany, and her positive personality with her other features being just a secondary attraction. I may have also fallen for her a bit... just saying.

Snow White with the Red Hair feels very similar to another series mentioned earlier, Yona of the Dawn, in terms of the art direction, animation and the style of writing. If I didn’t know better I’d say they were made and written by the same person, but they aren’t. The world is well-crafted and the introduction swift in setting the context of the characters within it. The animation is pretty; very pretty in fact, and detailed enough that in some cases, you can probably use some scenes to look up the genus of the plants which Shirayuki picks. If only I had an interest in botany...

I think the litmus test here will be where Snow White with the Red Hair takes its story. Will the writers push it onto a fairy tale path, where Shirayuki ends up with Prince Zen, living happily ever after, or will they go beyond the stereotype and deliver us a clever twist? Only more episodes, and ultimately its second season, will tell on that one as there have been no hints thus far other than the continuing hostility from the Prince-that-didn’t-get-what-he-wanted. Until then, I shall keep watching and (not-so) secretly admiring the flame-haired one and watching her blossom.

Snow White with the Red Hair is available in streaming form on Viewster.

7
A bit early to tell how it follows through, but Snow White boasts a strong start.
COMMENT AND DISCUSS
blog comments powered by Disqus