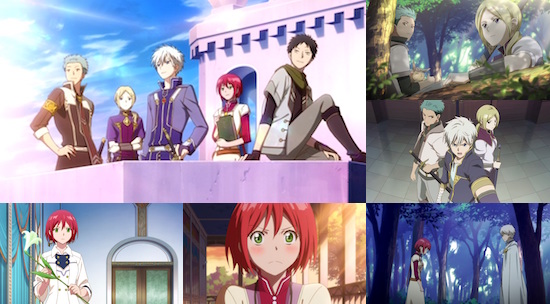 So let’s try starting at the beginning: Shirayuki is a herbalist in the Kingdom of Tanbarun, she’s well liked in her home town and seems to be getting along well in life, including running her own shop. That is until one fateful day when, upon hearing of her beautiful long red hair, the Kingdom’s Prince, Raj Shenazard, demands she become his concubine. Shirayuki isn’t particularly thrilled by the prospect, especially as Raj has a bit of a reputation as a tyrant, so she takes the decision to flee her homeland to begin anew in a neighbouring country. However, she does leave behind a little parting gift for Prince Raj - She cuts off her hair below the nape of her neck and leaves it in her shop.

Raj isn’t particularly enamoured by this turn of events and gives chase. Meanwhile Shirayuki runs into three strangers: Zen, Mitsuhide and Kiki, after Zen manages to injure himself being somewhat reckless. Shirayuki comes to his aid, and in return Zen protects her from Raj. It soon transpires that Zen is himself a Prince of Clarines, the neighbouring country Shirayuki has fled to. Luckily for Shirayuki, Zen is a lot nicer than Raj and helps inspire her to set up a new life in Clarines. That is where our story proper begins, as we follow Shirayuki in her new life and her relationships with Zen and those who surround him. Well, it’s a little more complicated than that, but I’ll spare you the spoilers.

That is pretty much is all there is to it - the rest of the series is basically just a (sometimes somewhat contrived) series of setups to further explore those inter-character relationships, especially that of Shirayuki and Zen. If a slow burning and relatively uneventfully, but somewhat sweet, love story between a spirited independent redhead and a prince is your cup of tea then this series is perfect for you. However it makes it a somewhat more difficult sell for the rest of us. There are some sweet moments, some funny moments, even the occasional dramatic moment, but there’s nothing that really grabs the viewer while screaming “you must continue to watch this series”. The characters are likeable enough, but the things that happen to them are often bland and uninspiring. Unlike Shirayuki’s red hair, Snow White with the Red Hair just doesn’t stand out.

What does stand out though is the animation. Some of the show's vistas in particular are great, as is the use of colour and lighting. However, that’s not what people come to a series like this looking for. I rather get the impression, or perhaps it's just a naive hope, that the whole first series is simply setting the groundwork of better things to come. The popularity of the series would seem indicate there is more to this story than is presented here in its first season, and there do seem to be occasional hints at something deeper.

Snow White with the Red Hair at this juncture then is a series you will not love, but nor is it a series you will hate. It is solidly middle of the road. However, if you long for a handsome, kind prince or a beautiful red-haired herbalist in your life then this is the series for you. Otherwise it is a series which is very difficult to raise any sort of passion about, a series that is best described with words such as satisfactory, adequate or sufficient. Therefore it is rather difficult to recommend spending £34.99 of your hard earned money on it - perhaps give it a look in streaming form on Funimation Now first and see how you get on.