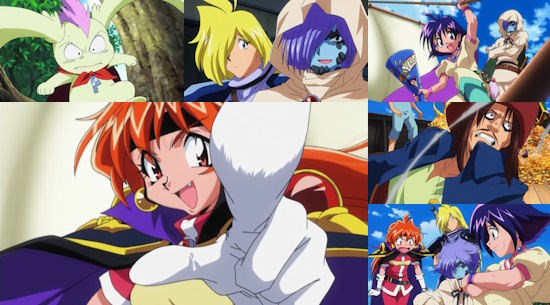 The Slayers are back!  Over thirteen years after the original series was broadcast on Japanese television, Lina Inverse and company made a return to TV screens to continue their madcap adventures, and after releasing all of those prior series on DVD over the past couple of years MVM Entertainment now brings this 21st century take on this well-known franchise to the UK.

The good news for fans of all things Slayers is that this first of two new series, Revolution, sets out resolutely to tread the same path followed by its predecessors - thus, its character designs are instantly recognisable (albeit with a more modern and polished digital feel) despite J.C. Staff taking over the animation reigns while its voice cast reunites all of the original actors and actresses from yesteryear for both the Japanese and English language dubs; only Xellos' English dub voice has changed amongst the major roles in the case, with the irrepressible Megumi Hayashibara once again providing Lina Inverse's Japanese voice.

Similarly, little has changed in Lina and Gourry Gabriev's world since we last visited it, with the only real disturbance to this destructive duo proving to be a shortage of bandits to practice their skills upon, leaving them to roam the high seas in search of pirates instead.  This idyllic past-time is soon called to an end however by the visitation of not just Princess Amelia and Zelgadis, but also an inspector from the kingdom of Ruvinagald - an inspector with a remit to arrest Lina Inverse... for being Lina Inverse!  To be fair, given her usual care-free demeanour and willingness to use potent magic on a whim, he may have a point.

It later transpires that the main crime of which Lina has been accused is the systematic destruction of a number of "magic tanks", and as Lina and friends investigate the true culprit we're introduced to the cute yet decidedly odd creature named Pokota; a little fellow who has very much more to him than meets the eye.  Cue the beginnings of a very typical Slayers adventure, taking in plagues, hidden kingdoms, demon beasts and of course interference from Xellos in matters as it suits his whims and current employer.

If nothing else, J.C. Staff have stuck as rigidly as possible to the series of Slayers which preceded it, right down to Revolution's episode titles and most of its background music.  Meanwhile, the plot and characters try their hardest to maintain that classic Slayers charm, throwing plenty of humour and slapstick around even in the midst of some of the show's more serious or otherwise dramatic moments.  While this approach is guaranteed to placate long-standing fans of the franchise, and it really is nice to see Lina and company with a 21st century makeover even if we're not getting a Blu-Ray release in the UK, such close adherence to the Slayers "formula" means that Revolution struggles to make a mark in comparison to the rest of the show's canon.

Revolution's biggest mistake is that its unique characters simply aren't compelling enough to bring any real interest to a story which also struggles to live up to some of the tales spun by prior series, while the humour and scripting of this series occasionally veers into "trying too hard" territory as it works to match everything that came before this new, more polished outing.  Although it does at least succeed in sowing some seeds for the next season, Evolution-R, there's nothing here that lifts the series outside of being largely run-of-the-mill.

There are a decent number of funny moments on show here, and with the original cast all present, correct and on form this makeover for the franchise isn't a complete disaster by any means - sadly it just isn't all that notable either to anyone bar the hardcore of existing fans.  If you're a new anime lover looking for an opportunity to jump in to the world of Slayers, this probably isn't it.

English 5.1 and Japanese 2.0 audio, English subtitles.  Extras are made up solely of the normal set of text-free opening and ending credits.

6
It's great to see the Slayers crew back - it's just a shame that they didn't manage to deliver more than a mediocre outing for us to enjoy.
LATEST REVIEWS
Girls' Last Tour