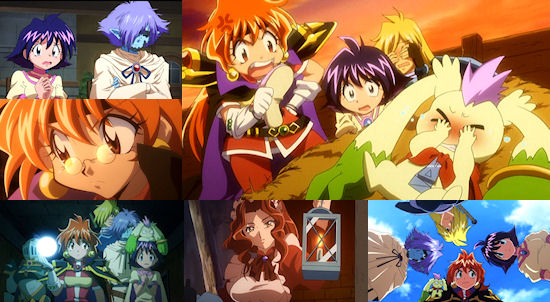 After two whole years of carefully, patiently watching every single season of Slayers for UK Anime courtesy of MVM Entertainment's releases of the show (minus its movie outings), the animated journey of Lina Inverse and company finally comes to an end (for now at least) with the release of Evolution-R, a two DVD outing which itself ends the tale started in Slayers Revolution a few months back.  To be honest, the franchise has grown on me notably since watching those early forays into its fantasy adventure story laced with comedy aplenty, to the point where I'm a little sad to see the end of the whole endeavour in sight.

Regardless, Evolution-R wastes no time in starting off where Revolution left off (albeit with a pretty clumsy yet functional attempt to recap that previous series story), with Zanaffar defeated and the gang's attentions turned instead to the search for a jar containing the spirit of Rezo the Red Priest in the hope of freeing Pokota's people from their elongated slumber.  Although searching for a jar sounds like a simple enough task it proves to be far from a walk in the supermarket, with Ozzel seemingly harbouring an important and decidedly dangerous individual and plenty of other assorted perils strewn along their path.

Of course, this being Slayers and in the time-honoured tradition of the franchise, Evolution-R finds plenty of time for asides before serving up what is effectively its main course - this means that the first DVD here is mostly light-hearted fare, with Lina and company bumping into an empty suit of armour with a soul attached to it (no, not Alphonse Elric), or getting involved in an increasingly ridiculous soap opera surrounding a family of talking fish with legs which is miles away the funniest thing ever to come out of the Slayers saga yet.

As the series progresses however we enter more serious territory, albeit still offset by moments of humour, gags and outright daftness - with the prospect of finding Rezo and the jar he resides in moving ever closer, so Evolution-R has some unexpected twists and turns to throw our way throughout its second half before pulling us into a surprisingly peril-strewn and dark finale that apes the very first series of the show in some obvious ways, squaring the circle and bringing its story to a close.

Come the end of it all, Evolution-R does everything required to keep the fans happy - as per Revolution before it, this final series remains true to its characters and artwork, keeps its mix of drama and irreverence well-poised via a pretty decent but far from ground-breaking story and ropes Megumi Hayashibara (the voice of Lina Inverse) into another catchy pair of theme tunes.  Thanks to its place in finishing the story Revolution started, it also benefits from a far stronger climax than its sibling, and possibly one of the better finales to a series of Slayers outright to allow it to sit comfortably and proudly within the Slayers canon.

If you're already a fan of Slayers then I'm probably preaching to the converted here and you'll be buying this release regardless of what I say.  For those wondering what all the fuss is about and not too keen on dipping their toes into the show's 1990s origins, then the Revolution and Evolution-R double-bill is a pretty respectable way to get a taste for the franchise.  Even if it doesn't quite match those original series, there's definitely some entertainment value to be had from this 21st century incarnation - I'd challenge even the most ice-hearted of anime fans not to have a sudden urge to run around your back garden shouting "Dragon Slaaaave" at the top of your voice after watching this series all the way through.

English 5.1 and Japanese 2.0 audio, English subtitles.  Extras are made up solely of the normal set of text-free opening and ending credits.﻿

7
Evolution-R is a fun and fitting end to the Slayers franchise as it stands.
COMMENT AND DISCUSS
blog comments powered by Disqus