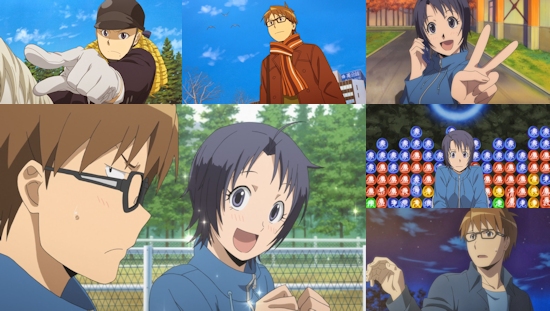 Although we only actually reviewed the first half of Silver Spoon's first season here at UK Anime, this wasn't out of any kind of disinterest in the show - rather, so consistent were its positive qualities that we found ourselves without anything additional to say about it; tempting though it is to simply craft a review that states "This is still really good", we like to wax lyrical about shows a little more than that.

In a sense, we're facing a similar issue with season two of Silver Spoon - it still boasts the same comedy and strength of character as its immediate predecessor. However, the show's narrative does traverse some different paths this time around, so let's talk about that a little.

As per its first series, Silver Spoon continues to follow the trials and tribulations of Yugo Hachiken, a city boy who has poured himself heart and soul into making inroads into an agricultural school which was initially chosen by him simply to escape from his parental home, but a place that has grown to occupy a substantial place in his heart. Such are Hachiken's efforts that he's become the can-do, go-to guy for many when they need hand with something - although his inability to learn when to say "no" takes its toll at times during the series.

In fact, Hachiken's investment in his surroundings is the cause of most of his angst (and by extension most of the drama) in this second series - the realisation that friends Mikage and Komaba are hiding something from him causes him no end of distress, and when he finally finds out what that secret is it only upsets him all the more before he throws himself headlong, as always, into doing what he can to fix the issues which stem from the whole scenario.

If this makes Silver Spoon's second season sound like non-stop drama, we can't stress enough that this isn't the case - the show still has no shortage of perfectly timed, paced and pitched comedy to enjoy, and there are few shows that can cram as many belly laughs into their running time each week while still tackling important plot points. The blending of this comedy with dramatic or emotional moments is exquisite, as tense moments are broken when required by a gag or snappy one-liner yet never in a way that detracts from those important moments, and with the series showing an unnerving eye for how to arrange its story for maximum effect. This is perhaps best exemplified by a moment at the end of this season's school festival arc, where a simple guest book message is timed and placed perfectly to reduce this reviewer to floods of tears as a culmination to emotions that have been carefully cultivated over several episodes. What other show could elicit that reaction with a few unspoken, written words on a piece of paper?

As per its first series, perhaps the most off-putting element of Silver Spoon for some could be its character designs, which occasionally feel a little ill-fitting but soon become another part of the furniture, and at times they're even used to good comedic effect in their own right. The broader visual treatment of the show is still solid, accentuated in places to complement certain gags but mostly given a steady hand that never threatens to either detract or distract from the actual story and dialogue.

Beyond this, the only real hurdle to be overcome is to actually sit down and watch this series - the prospect of life at an agricultural school may not set the blood racing, but if you can actually make the time to dedicate to watching an episode or two you'll soon be hooked by its strong cast and great sense of humour and drama intertwined. This is one of those shows that you're best served trying for yourself rather than trying to make your mind up from reviews and plot synopses, making it a perfect vehicle in this age of streaming anime - head on over to Crunchyroll, give some of it a watch, and then come back to tell us how right we are!

9
Silver Spoon continues to exhibit a perfect blend of comedy, emotion and character drama to mark itself out as a truly superb series.
COMMENT AND DISCUSS
blog comments powered by Disqus