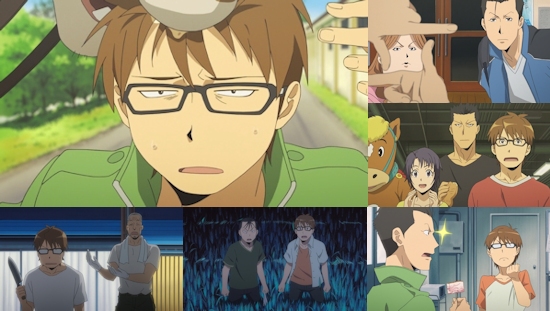 If I were to tell you to watch an anime series all about farming and agriculture because it's one of the year's most entertaining shows, you'd probably give me an odd look and wonder when the men in white coats are scheduled to turn up for me. Then again, perhaps if I were to tell you that this series is adapted from a manga penned by Hirumo Arakawa (of Fullmetal Alchemist fame) you might give my ramblings pause for thought. And so you should, as Silver Spoon is legitimately one of the year's most entertaining series so far.

Rather than throwing us into the thick of it, Silver Spoon introduces us to its premise via Yugo Hachiken, a young man who really has no idea of what he wants to do with his life. What he does know is that he wants to get as far away as possible from his family for reasons as yet unclear, which leads to him enrolling at an agricultural college to ensure that he can spend his time in the dorms there and a substantial distance from his home.

Unsurprisingly, Hachiken is alone in his motivations and finds himself starting life at this new school surrounded by passionate, knowledgable and driven individuals, all of whom have goals as to what they want to do within the industry upon graduation. If this isn't enough of an issue, Hachiken is left feeling like a fish out of water (and an exhausted one at that) in this world of early starts, late finishes, hard labour and an often brutal introduction to the hardships of farm life for both animals and staff. All of these experiences are drawn from the author's own life growing up as part of a farming family, which lends credence and a feeling of authenticity to the whole affair that really accentuates these elements handily.

This premise in itself sets the tone for the show's opening episodes, which doesn't really offer up any surprises but still succeeds in being funny and charming in equal measures as Hachiken tries to come to terms with what he's let himself in for while also trying to fit in with those around him. This gives us some early clues as to the strength of the show's cast, and not least Hachiken himself - at first glance he can seem blunt and insensitive, but it's satisfying to watch him learn and grow through his interactions and education into a more understanding individual. This is also helped by those around our leading lad, as characters that could so easily have descended into stereotypes manage to step outside of those boundaries sufficiently to strike out in their own terms.

The building up of these characters and relationships clearly becomes more important as the series thus far progresses - you can only get so far by playing the "farming looks crazy to outsiders" angle, and Silver Spoon largely proves to be a perfect judge of how to mix up this alien look at agricultural life with introspective character moments that smartly spin-off those talking points to consider broader concerns and implications. It's actually hard to describe just how well these various facets of the series slot together because they feel so organic as to be imperceptible - Silver Spoon's well-timed humour, light drama and emotion all bond into a coherent whole that can carry an emotional payload while still entertaining the viewer utterly.

The only area where you could argue that Silver Spoon struggles is with its character designs - the series as a whole looks pretty decent, but there is perhaps an impression of sloppiness about the way its characters have been created for the most part. In the grand scheme of things this is no big deal, and all the show's characters quickly become instantly recongisable, but it's about the closest we can come to a crticism in a show that we otherwise love unequivocably at this point in time.

If you go into this series expecting another Hirumo Arakawa magnum opus a la Fullmetal Alchemist then you'll be disappointed, but with expectations correctly realigned Silver Spoon is nothing short of a triumph so far - it's a lot of fun to watch, frequently laugh out loud funny and has no shortage of strong characters to push both the story and comedy along. Whether it has the legs to keep up this level of entertainment through the remainder of this season and into its second is a question for another day, and one that does nothing to diminish our enjoyment of the series thus far.

8
An unusual premise backed up with great comedy and no shortage of strong characters makes this series a joy to watch so far.
COMMENT AND DISCUSS
blog comments powered by Disqus