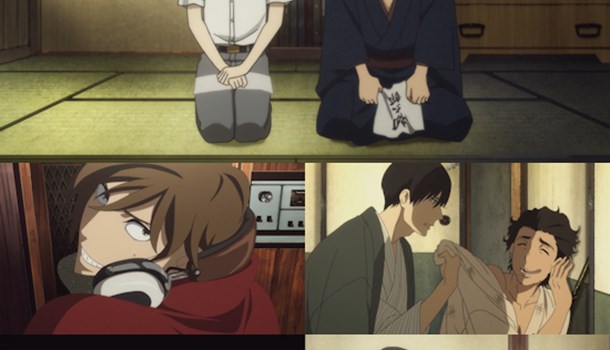 As much as we talk about animation for its visual craft, for many its capabilities as a story-telling medium is just as important. In fact, I suspect that the simple fact that you're reading this review right now suggests that you have an interest in good narrative and interesting stories just as much as you do colourful and fluid animation.

With that in mind Showa Genroku Rakugo Shinju is, to a greater or lesser extent, a story fascinated by telling stories, and perhaps more importantly what it says about those who tell them. This comes via the form of rakugo, a traditional Japanese narrative art form that is something akin to stand-up comedy, albeit without the standing up part - a single story-teller sits on stage and plays as many roles as required of whatever comedic story he seeks to tell to the audience, with only a fan and cloth as props.

We join our story at a time where rakugo has become somewhat obscure, brushed aside by more modern entertainment pursuits that offer an immediacy and presentational punch that this more traditional means of story-telling cannot compare to. However, this isn't an issue for Kyoji - enraptured by a rakugo performance at the prison where he was serving time, upon his release this young man seeks out an opportunity to make a fresh start as an apprentice to not just any old rakugo performer but the best in the business: Yakumo Yurakutei.

However, for all of Kyoji's passion Yakumo is adamant that he won't take on an apprentice under any circumstances, although even he can't help but be swayed in this conviction - not just by Yotaro's earnest pleas, but because this young man reminds him of a close friend from his past...

As it turns out, the double-length opening episode of Showa Genroku Rakugo Shinju is actually a case of misdirection (at least for its first season) - just as we're settling into the idea of following Kyoji's path into the world of rakugo, so we find that he is in fact merely a foil for the real story, that being Yakumo (or Bon, to use his birth name) and his own difficult path from unwanted child to star of the rakugo stage.

More specifically, the focus of the series is Bon's relationship with another wannabe rakugo performer named Shin, or Sukeroku as he comes to be known. There's little love lost between this chalk and cheese pairing as the taciturn Bon has little time for the loud, precocious nature of his fellow apprentice, yet it can't be denied that the way Shin turns his natural exuberance into the basis for his performances is powerful stuff that equates to comedy gold dust. As time passes, these two differing personalities find that their shared passions outweigh their stark differences, and thus a friendship forms against a shifting backdrop that takes the pair through war and peace, love and loss, and of course the all-important quest for both individuals to find their unique style of rakugo as they seek to reach the pinnacle of their chosen profession.

As you might have guessed at this point, Showa Genroku Rakugo Shinju is rich in character drama as it revolves around its two main characters, and it really can't be overstated how impeccably these characters and their changing relationship is put across throughout the series. When we talk about drama (in anime or other forms) what we're actually often talking about is an overblown caricature of real-life drama, where every little spat turns into a life-or-death argument and every step in a character's life seems to be taken upon a crumbling precipice which could cause their entire existence to come tumbling down. By contrast, there's something pleasingly grounded about Bon and Shin's relationship in this series - arguments are brief and often ended from exhausted exasperation rather than with a pointed exclamation mark, and even tussles over love and career matters play out with the kind of understated frustrations that you might expect when two close friends tangle in unseemly ways.

This nuanced treatment also extends to the characters themselves - neither Bon nor Shin serve as an angel or a devil within the series, as they are both utterly human in their behaviour and feel very much like living, breathing individuals. Sometimes the irresponsible Shin will have a moment of maturity, or the normally calm Bon will lose his cool, and every time it feels like we get to see a little more of that individual's humanity and personality as a whole. This leaves both main characters as likeable - not as the self-insert symbols of perfection we often see within anime, but as flawed but genuine individuals that are easy to relate to. It's also fascinating to watch as they learn, grow and shape themselves and their careers as they discover what they truly want to do and how they want to go about it.

Given its subject matter, it probably goes without saying that rakugo itself gets plenty of focus within the series, and this arguably provides some of the show's standout moments. Put simply, the presentation of these exhibitions of the craft of rakugo are sensational - the voice cast have clearly imbued a lot of time and practice into creating believable performances from stilted early ventures from characters in their youth through to confident, refined ones as they get to grips with their careers. Bolstered by some genuinely compelling stories and moments of humour that do a great job of showing off the appeal of the form, these moments are truly delightful even before we reach some of the later performances that also tie into the show's drama in well-integrated fashion. If you don't have any knowledge or interest in rakugo when you start this series, chances are you'll be hungry to know and see more by its conclusion.

The final piece in the puzzle that slots perfectly into place here is the show's direction. Studio DEEN may not be the highest regarded of production studios these days but they do great work here in making a lot from a little in terms of expressive character animation, while the broader direction of the series is increasingly astounding as it reaches its final episodes. Whether it's the use of colour or composition of shots, the delivery of on-screen events undoubtedly accentuates its already engaging story immensely, and quite frankly it's a great example of how far strong direction can go to bring over a story successfully.

Put all of this together and you have a quiet, understated masterpiece. It feels a little odd to talk about Showa Genroku Rakugo Shinju in quite those terms, as it goes about its business so quietly and with relatively little fanfare, but that's exactly what makes it so smart - it captures a dramatic reality without needing to rely on the shouting, screaming and sobbing to put its sometimes heart-rending moments across. Instead, this is the dignified face of drama that you and I are more likely to recognise as akin to our own, where personal pain and loss is never allowed to subsume the fact that life must go on regardless, and the recognition of this by the series makes it all the stronger.

Its obscure focus (to a western audience at least) and the setting borne of it makes Showa Genroku Rakugo Shinju a hard sell, but it really shouldn't be - this is one of the best anime dramas we've seen in some years now, and its confident delivery and presentation mark it out as a quality production fitting of its elegant storytelling. With a second season to come to bring us back to the present and complete its story, it's likely that we'll be gushing further about this show in the near future - for now though, anyone who is a fan of character-driven drama absolutely must watch this series, no questions asked.

You can currently watch Showa Genroku Rakugo Shinju in streaming form on Crunchyroll.

10
A quiet, understated work of genius that any fan of character-centric drama should watch.
LATEST REVIEWS
Girls' Last Tour