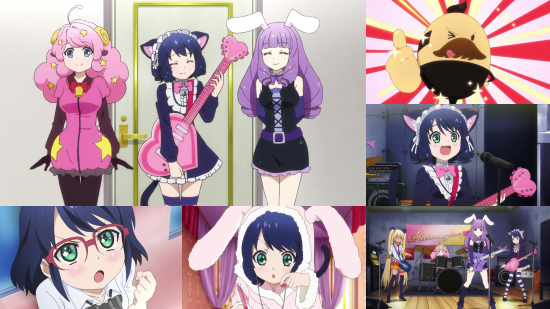 When it comes to selecting a new series to indulge in, I tend to give anything a try. Within a few minutes of getting the basic gist of the series, finding out whether it’s a horror, science fiction or just plain depressing, I can work out what the series is about and then take the plunge. Although I went through this process with Show By Rock - and let’s be honest here the animal-ears on the female protagonists sold it quite quickly for me - I didn’t have a clue what the series was actually about, or even how to properly categorise it. After consuming this first series, I kind of still don’t.

Show by Rock starts innocently enough. Cyan, a high schooler, is both musically gifted and obsessed, but also shy. Her shyness stops her from forming friendships, from being social and, in this case, also from asking to join the band society at her school. Cyan’s dream is to be in a band and little does she know that she will get her chance, just not in the way she had originally expected.

Through playing a game on her phone -you know the kind, it’s a free to play music rhythm game with idols - Cyan unlocks a new item. A strawberry guitar! Cool, right? Cue a Tron-like sequence where Cyan finds herself transported into her phone and into a musical realm where she finds herself standing on a monochrome virtual city, guitar in hand, cat ears and tail twitching, and standing before a gigantic monster who is having its way with three male band members. What could anyone do, except what comes naturally? Cyan grabs her guitar and enthusiastically jams, her melodic power thrusting against the monster, defeating it. Upon her victory, it seems like she has gained other attributes other than just her own pair of cute black cat ears and an enthusiastic tail: she now has a crystal inside her which evolves with her musical ability, and she can transform into a super-deformed version of herself while rocking out. Such is the existence of a MuMon. (Music Monster?)

Her efforts haven’t gone unnoticed either. During her rocking performance against the monster, she is scouted out for the female group Plasmagica, managed by a weird egg-thing called Maple with a cheesy 60’s moustache (seriously) who owns Branded Rocking Records, which is run out of a run-down building in Midi City. Cyan finds herself joined by three more artists - a self-depricating bunny-girl called ChuChu, a weird alien sheep named Moa, a possessive golden retriever-girl Retoree - and together they form the cute pop group. Together they rock their way through band competitions and concerts, in an effort to improve their standing in this musical universe.

It is not over for Cyan however. She discovers that she is now the saviour of this world. Brought here to save the world from the dark monsters and unknowingly fight the evil ambition of Dagger Morse, the #1 music agent on Planet Music, and the owner of the biggest record company, Unicorn Virtual Music. This Dagger wants to create the ultimate song to transform the planet in his image by recruiting the greatest musicians on the planet, which includes Cyan of course. This is perhaps all a bit much for a shy girl who just wanted to play her music with friends.

At first I was a bit put off by Show by Rock. I think it was mostly just surprise at the rapid change in art styles from the super-deformed CG animation to more traditional character stylings. It’s a bit off-putting, but quickly grows on you once you work out that by transforming the girls are able to perform and power up their melodisian crystals. The series actually puts a lot of effort into its animation and one thing I have noticed is that it really suits the Blu-ray format.

Given that Show by Rock is a series about music, you would of course expect that it has its own repertoire of songs to accompany the series which, in their own right, are catchy as hell (and in fact have since joined my playlist alongside the entirety of the Macross franchise). What is perhaps unique to this series, and something which I haven’t really seen since the Pioneer days, is that most of the songs are bi-lingual with the English voice actors performing singing roles similar to some of the music way-back-when. The performances are actually rather good, and even better in a couple of cases. Credit where it's due to Funimation Entertainment, they have done a very good job here in their casting choices and direction, and although the Japanese dub is my choice in this case the English localisation is very well directed and quite watchable. I recommend that you give it a try and see which you prefer.

I was a little undecided in the beginning - Show by Rock wasn’t a series which screamed out “watch me” and due to its occasional saccharine nature it does not lend itself overly well to binge viewing, but I have kind of fallen in love with Plasmagica, even if Cyan is a bit whiny. It will be good to see what comes of the group in the second season.

English 5.1 and Japanese stereo audio. Extras consist of Band Promos!! feature, commercials for bands, two versions of the clean opening song and six renditions of the closing song including a text-free version.

7
Show by Rock shows you how to rock your socks off.
COMMENT AND DISCUSS
blog comments powered by Disqus