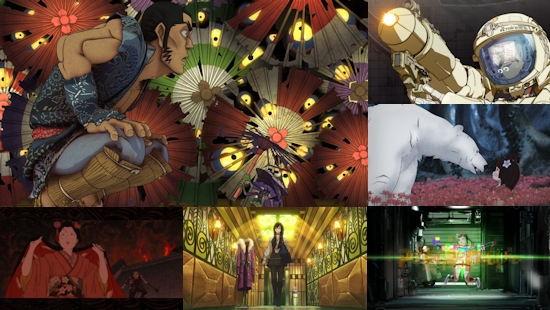 We're used to having pressing questions to think about while writing reviews here at UK Anime, but one quandary we've never had to tackle before is "Which section of the site does this review even belong in?" That, however, is exactly the case with Short Peace, a five-part collection of unrelated stories produced by Sunrise that features not only four short animated films, but also a fifth video game element, that being the Suda51-directed Ranko Tsukigime's Longest Day. It's this element that has led to Short Peace's release being placed in the hands of Bandai Namco, and the result is a hybrid PlayStation 3 and standard Blu-Ray disc containing all five elements of Short Peace in a single collection. As the anime content outnumbers the video game portion (in number if not in running time) however, we've opted to sling our review into the anime section - fear not though, we will be talking about its video game element too.

Starting out with those four animated shorts, our introduction begins with a decidedly Alice in Wonderland inspired opening, as a young girl follows a white rabbit in scenes with set the tone for at least some of the content to follow - slightly surreal, but oddly engaging. From here, we jump straight into the first story, Shuhei Morita's Oscar-nominated Possessions.

It's easy to see why this short picked up such a nomination, as its contents is just the kind of quirky, satisfying fare that tends to attract many to anime, depicting as it does the tale of a man seeking shelter from a storm, only to find himself stumbling into the world of Tsukumogami, the ghostly spirits of tools and instruments from clothing to parasols that have returned to haunt and trick mankind after a century of disuse. Luckily, our protagonist is the practical sort, and rather than fleeing in terror he sets about repairing these old, battered implements, which might just set him on the path to freedom. With some solid, well-animated CG and great use of colour, Possessions is both visually eye-catching and smart enough not to outstay its welcome - it doesn't labour for too long upon its idea, and the film's short nature most certainly works in its favour to make for a satisfying start to this quartet of shorts.

From here, we move forth to an outright award-winner from this collection, Katsuhiro Otomo's Combustible. Set in Edo-era Japan, this short follows two individuals from childhood through to their diverging lives as young adults - Owaka and Matsukichi begin their relationship as children living in a well-to-do part of the city, but grow up to follow very different paths of the former finds herself tied into an arranged marriage while the latter is disowned by his family and goes on to follow his dream of becoming a firefighter. When a freak accident caused by Owaka starts a blaze in here home she eschews putting out the fire, instead letting it burn until she finds herself caught in a raging inferno - a fire which, of course, Matsukichi is on-hand to try to extinguish. Its story might be simple, but Combustible proves to be a wonderfully potent short film, from its sedate and friendly beginnings through to a fraught and powerful (if somewhat open-ended) climax. Some of its CG work is a little clunky but the overall aesthetic of the short is excellent, and film's careful building of its story is matched by a superb use of music which similarly builds and swells as the tension around its tale intensifies. Katsuhiro Otomo doesn't really need any further examples of his mastery, but regardless this is another impressive work to add to his oeuvre.

Third in this collection is arguably the weakest of all the shorts - Gambo imagines a town where a wicked red demon is attacking the populace, causing untold damage and snatching up its women to use for the procreation of more of its kind. With one young girl the only female left, tensions are high, but it's this girl who unwittingly stumbles across the potential solution to their problem - a vicious polar bear which she names Gambo, who takes a shine to the youngster and ultimately takes on the demon in a head-to-head battle. Visually, Gambo is a short which pulls no punches, mixing some disturbing imagery (and one decidedly ugly demon) with a visceral blood-and-guts action component that is absolutely brutal to watch - its use of CG and some of the effects surrounding it dampen the effectiveness of its animation markedly in places, and of the four shorts its story is the least coherent, but if you ever wanted to see a polar bear and a fat demon wrestling then... well, that wish has now been granted.

Last but certainly not least is A Farewell to Weapons, a short based upon an original story by Katsuhiro Otomo and revolving around a "clean-up" team of men sent to handle leftover - but still active - weapons in the aftermath of a war. Although their suited up and well-equipped to the point where they can laugh off an encounter with a landmine, this is far from safe work, as they discover when they run into an errant autonomous tank. Of the four shorts this is by far our favourite, its visuals fit the tone and setting of the piece perfectly, its CG all fits well within those confines too, and its unfolding scenario is utterly gripping before sending off the viewer with a smile and a wink to add some comedy to its potent mix. This is the kind of short that you could watch over and over again and never get tired of, and Short Peace is arguably worth the price of admission for A Farewell to Weapons alone - a fact which shouldn't diminish the fact that all of its animated content combine into a compelling package that any anime fan should seriously consider checking out.

This takes us to the video game content of the collection, and Ranko Tsukigime's Longest Day. The game's titular character, the eye-patch sporting Ranko, is a girl who is known to most simply as "Meter Maid" thanks to her father's job at the head of a huge company that runs many of Japan's car parking facilities. Whether this nickname is responsible for what follows is unclear, but Ranko wants nothing more than to assassinate her father - something which takes her on an ever-more insane adventure featuring dragons, wrestlers and a three-eyed sister. Put simply, the game's story is bonkers and makes absolutely no sense - something that it revels in as its story unfolds between stages of the game itself via animated cut-scenes (some of which, we should note, suffer from painfully badly timed subtitles which can make them frustrating to watch) which make use of a wide variety of styles that range from the accomplished through to the eye-catching all the way to the outright hilariously bananas.

While its story is fun to follow in its own weird and surreal way, the game itself is broken up into a number of stages, most of which consist of side-scrolling action as Ranko races through various locales at high speed while trying to fend off bizarre spirits (or, later, a giant dog) who are constantly hot on her heels. The controls here are simple - run, jump, attack, and use the ammo you've built up by killing enemies to fire special shots either in front of you to kill the critters which litter each stage, or behind you to keep the chasing spirits from catching up with you. It's frenetic, fast paced and broadly quite fun, although for a game that relies heavily on timing and the momentum you build up through a level, its occasional lack of pixel-precision collision detection and the like can be frustrating.

Breaking up these side-scrolling stages are a variety of boss fights, including a low-rent "bullet hell" battle against a dragon, a weird platform-based battle against a wrestler and a vertical-scrolling platform level. These additions to add some flavour to proceedings, although they range from the overly simple through to the downright frustrating, again often down to the imprecise "feel" of the game's controls at times.

Satisfying though it is at times, there isn't a lot to Ranko Tsukigime's Longest Day in pure gaming terms - you'll be able to finish the game in around an hour or so, and the only replayability comes from the potential to unlock concept art via collectibles or completing challenges. If you're not interested in the animated content and just want to play another game with Suda51's name attached to it then there really isn't enough here to justify the price tag, so if you're only looking at the game on its own we'd rate it as a 6/10 in its own right - it's a visually varied game that has some wonderfully surreal splashes of colour and a great sense of humour, but at times stages of the game simply feel like a roadblock to watching the best part of the title, that being its animated cut-scenes. Thankfully, once you've completed the game once, both those cut scenes and the game's excellent soundtrack are unlocked for you to enjoy at your leisure.

Taken as a whole however, Short Peace is a strong collection indeed - for all of its flaws Ranko Tsukigime's Longest Day is certainly an experience that you'll want to participate in, and even the weakest of the four short films has a lot to offer. Couple that with the strength of the other shorts, all of which are great, and Short Peace is definitely a worthy addition to any anime fan's collection - it should be treated as an anime more than a game (which makes its price point a little galling), but its collection of talent is used to great effect to create some memorable shorts that will easily stand up to repeated viewings.

8
An excellent collection of short films coupled with a flawed, short but broadly fun little game, Short Peace is worthy of a place in any anime fan's collection.
COMMENT AND DISCUSS
blog comments powered by Disqus