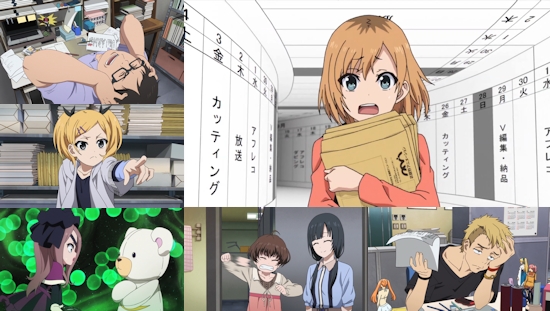 We were always excited by the prospect of an anime set within the world of anime production itself, but even in our wildest dreams we weren't ready for something quite as successful in its depiction of the Japanese anime business as Shirobako - hugely informative, but still willing to go out on a dramatic limb in the name of comedy or entertainment, it quickly won a place in our hearts during its early episodes. But does it have enough of a story to tell to fill a full twenty-six episode series?

Thankfully, the answer a resounding "yes". For starters, the remainder of the show's first half still has plenty to play with as we continue to look in on production of Musashi Animation's original series Exodus, with things becoming decidedly fraught as the final episode looms with nary a storyboard in sight from the director. With time fast running out, can anyone find a way to fire up his creativity at a time when he simply wants to run and hide from his responsibilities? The results are engaging and entertaining in equal measure, and come the end of this particular story arc you'll find yourself cheering on the studio's production staff as they race to make it across the finish line.

Incredibly, the second half of the series manages to top even this, as the studio's next task quickly begins in the form of an anime adaptation of popular manga series Third Aerial Girls Squadron. This allows us to see the formative moments of a new project (which we missed by jumping into mid-production of Exodus at the start of the series), which is slickly delivered with plenty of hefty yet enjoyable exposition on the myriad meetings to be attended and decisions made before an artist's pen is put to paper. Narrating these early stages of production via the doll and bear which effectively act as protagonist Aoi Miyamori's inner consciousness is an odd way to go about things, but it works surprisingly well when scattered amongst the discussions going on amongst the studio staff around the project.

This is a project that we get to follow from its exciting beginnings through to its potentially bitter end, chronicling the problems inherent in adapting another's work as well as some more personal dilemmas for the group of young girls the show primarily follows while they try to figure out their future career paths and desires. From voice casting difficulties through to outsourcing animation duties to other studios, Shirobako continues to paint the industry with an impressively broad (and refreshingly honest) brush, and anyone who has ever wondered how things play out behind the scenes at an anime studio will learn a lot here.

That said, we shouldn't need to point out that Shirobako is no documentary (no matter how autobiographical it feels when set against the career of its director sometimes), and the show is all the richer for that fact. If the first half of Shirobako is hilarious, then the second half is almost painfully so, leaving you gasping for breath as it assaults you with increasingly surreal visuals and a wonderful sense of imagination via its flights of fancy - here is a show that knows it's here to entertain and be fun, and never missed an opportunity to do so in each and every episode. Once that's backed up with equally entertaining yet entirely believable characters (you can pick out every individual and point at someone you've worked with in that mould, most likely) and some heartfelt soul-searching about their lives and careers in some cases, you have yourself what is effectively the perfect series.

Yes, we did just use the "p" word, as Shirobako is virtually flawless in its execution, achieving everything that it sets out to with some superb production values, excellent story-telling and a perfect blend of the elements which constitute its execution of that narrative. We can't think of any other series which has been quite so fun to watch while also subtly teaching us about the craft that it casts an eye over, and while we'd normally be talking about a series in terms of "it's almost perfect, but...", it's hard to find anything negative to say about Shirobako that isn't nit-picking. Thus, this series is a shoe-in for a ten out of ten score, and our only difficulty in writing this review is that trying to cite examples of its quality is tough, as they are simply so numerous it's hard to know where to start without spoiling things.

Sometimes when we call a series "must watch", we mean "must watch, as long as it sounds like it's your cup of tea". Shirobako, on the other hand, is a must watch provided you have any interest in animation whatsoever, and simply the fact that you're reading this very page suggests that you are. It's a modern gem and a work of genius, and if it doesn't get a UK release on home video it'll be an absolute crime. Now, stop reading this review and go watch Shirobako...

You can currently watch Shirobako in streaming form on Crunchyroll.

10
An informative depiction of the anime production industry, infused with a wonderful dose of hilarious larger than life humour that delivers vast amounts of entertainment value alongside it. An almost perfect series.
COMMENT AND DISCUSS
blog comments powered by Disqus