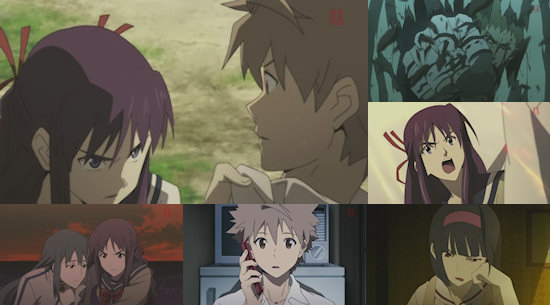 Distributor
Manga Entertainment
Certificate
12
Price
£14.99
Date
23 May 2011
I'm going to start this review with a torturous metaphor that marries anime to one of my other interests, home baking (don't laugh!). You see, Shikabane Hime can be compared to a well made muffin. All of the ingredients are present in the right amount, proper care and attention has been paid in making the mixture, and the oven was set to just the right temperature so the end result is very well formed and, most importantly, delicious. There is only one problem with this yummy muffin - it's missing something. This is a plain muffin, crying out for something extra - some chocolate chips perhaps, or maybe some butter icing to make it as delicious as it can be. As it stands, Shikabane Hime is a very nice, if plain, muffin.

Shikabane Hime focuses on protagonist Ouri Kagami, an orphan who is taken in at a young age by the Buddhist monk Keisei Tagami, whom Ouri comes to regard as his dad, brother and best friend all rolled into one. Ouri’s rather mundane life at the orphanage gets shaken up somewhat when he sneaks into the temple one night to find his brother, beaten to within an inch of his life, reviving what appears to be a dead girl. While technically she is dead, Makina Hoshimura is a Shikabane Hime; a girl who lives after death due to overpowering regrets experienced in her last moments, and who is contracted to fight with Keisei against dangerous uncontrolled Shikabane (also corpses with lingering regrets) who threaten the safety of the unknowing populace. So, the show has large quantities of girls kicking ass if that is your sort of thing. This, combined with the fact that all of the characters who do the fighting are female, gives the show a feeling reminicient of Claymore, including the vague hint of tragedy that permeates events. The show sets all of this premise up effortlessly, and it's a treat to watch it unfold so I am wary of giving away more with this synopsis. Despite a minor blip in the first few episodes (where you wonder why so few people have heard of vengeful corpses coming back to life; that seems like a pretty big deal), the show easily manages to build a world and maintain suspension of disbelief.

In particular the world feels believable because the characters are themselves credible - people have well-defined motives, desires, and reactions to what is unfolding before them. This is especially true about the main protagonist, Ouri - while it would be easy to make him a spineless welp the series instead takes pains to give him his own interesting back story, adding to the overall depth of the world presented. Another amazing character is Ouri’s brother, Keisei. Keisei is a genuinely likable character and a treat to behold when he is on screen - most of the time. Sadly the show does have a few weak links, one of them being its use of Keisei as a comedy foil because “hey hey, he is a figure collecting otaku! Isn’t that wacky?!”, which falls flat every time it is used. There are also some godawful female character designs, in particular Rika, who usually wears nothing but a black wonderbra and a lab coat that is left open at all times. What the hell? I think she also wears trousers but for some reason the camera focuses on her top half when she is in the scene. Strange, that.

My main praise for Shikabane Hime, as referenced in my introduction, is that it is very well put together. The plot moves at a comfortable clip, introducing new aspects and elaborating on them with masterful timing that meant that at all points I was keenly interested in what was happening. The protagonist, Ouri, is very well suited as being the viewer's eye on the world while still remaining an intriguing part of the story himself. Both the main overarching plotline and the single episodic plot lines are very well structured and revealed so that you always know the reasons behind what is occurring on screen and what ramifications it will have going forward. This is quite refreshing, as you always feel included in the events that are unfolding. Exposition is very well handled and is doled out both at sensible times and an in sensible amounts so that, with a few niggling exceptions, you always feel you are being naturally educated about the world inside the show without the cloying feeling that comes when a character stares at the camera and talks directly to you, the viewer. Over these thirteen episodes the plotline follows an easily identifiable curve as it ramps up until the last episode in the set which is set up as an intermission of sorts before the second act of the show.

The main downside of this careful pacing is that it never feels like it breaks out of a comfortable jog. Even during massive plot-altering events or badass fight scenes the show maintains the same sedate pace, numbing a lot of the impact of what is unfolding. Even worse, this slow and unchanging pace means that the show becomes predictable Sure, the fight scenes are well made, easy to follow and interesting to watch, but there is no killer edge that would get you pumped about what is happening. This leaves the show feeling rather limp, devoid of the tension or spark that would elevate it above being simply "good". This, I feel, is the icing that is missing off of the cake.

Visually, Shikabane Hime looks nice, if somewhat cheap at times. The backdrops are always pleasant to look at, but the characters felt like they were the cruel victims of cost cutting measures due to their low detail, colour count, and the frequency with which they appear off-model. This is easily compensated for my the sheer fluidity of their motion on screen, which really comes into its own during the fight scenes.

The release itself is fine - the picture quality was decent throughout and I can only remember a single grammatical error in the subtitles, which was negligible. The only complaint I have in this arena is that when two people are talking simultaneously the subtitles for both sets of speech will update at the same time, which confused me a great deal. The menus are nice and clean and easy to navigate, which helps as my DVD player has a terrible remote. There are few extras - textless openings and endings, and there is an audio commentary of episode twelve featuring some of the English dub cast, which is a nice addition to a pivotal episode of the series. I tried the dub out multiple times when watching and while it was perfectly serviceable the delivery on some of the cast felt flat, and the main protagonist's voice was particularly grating which dragged down the rest of the performance.

I enjoyed my time with Shikabane Hime so far - it's a solidly made show that maintained my interest for the whole duration, and I'd happily lend this set out to friends who are not so familiar with anime. While it has no real low points it doesnt have many amazing high points either; a shame as with a little extra it really could have shined. As mentioned in the intro, it's just a little plain. But, if you want to watch a show that features a zombie schoolgirl using dual Mac-10s to kill undead abominations driven by lingering regret (including a monster made out of money!), then you’ll be very well serviced indeed by Shikabane Hime.

7
A solid, well produced tale that never stumbles but never quite realises its potential.
COMMENT AND DISCUSS
blog comments powered by Disqus