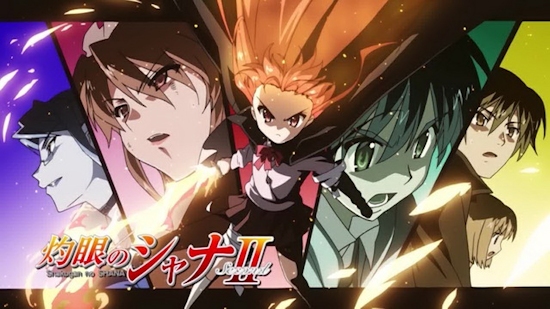 The heated bond between Shana and Yuji is tested as their paranormal adventures continue. The Flame Haze fends off supernatural foes by night, but by day, she contends with a classmate who's also after Yuji's heart. Emotions flare as a suspicious transfer student who resembles a recently defeated Denizen clings to Yuji. His training rises in intensity when they catch wind of a revered warrior in search of her lost lover, who will stop at nothing to extract the power keeping Yuji alive!

Shana returns to our screens utilising a neat little plot device that revisits the events of series one, bringing us nicely up to sped with Yuji and company's current status quo. Shana and Yuji are still training together as Flame Haze and Mystes.

Clever introduction aside, Shana's return brings the usual mix of school drama and supernatural action, but this time around there's far more of the former. And maybe I'm just getting old and cynical, but I really can't remember the cast seeming so young; it took me out of the series somewhat as everyone looks and acts about 12 years old. Even Shana is more petulant tween than ass-kicking sword-wielding weapon.

Things aren't aided by the fact that there's now a new girl thrown into the mix, who acts even younger than the rest of the cast, but at least she represents a potential and interesting threat, resembling as she does Supreme Throne Hecate from the previous season's finale.

Ultimately pacing damages this first box of Shana - did we really need an entire episode of girls sighing over watercolour-shots of tiny interactions with Yuji? Given that we had plenty of that over the previous three, no, probably not.

The Buffy-esque intro to the show is a highlight, though animation is standard made-for-TV fare. The English dub is fine, though again it emphasises how young the characters are. Marjory Dawe is probably the best asset in this box, being sexy, mostly drunk and yet still able to pull it together for a good fight. The plot threads are there, but we're a long way from premium Shana action.

This is an anime capable of some fantastic set-pieces, solid plotting and interesting villains, it just seems as though season two is keeping all the good stuff until the second set arrives. In the meantime, so long as you're content to simply hang out with a lovelorn cast of kids while things heat up (and the payoff is worth it) then pick up a copy, grit your teeth and enjoy it for what it is!

6
Best seen as Shana-lite and a chance to get to know the characters again, the best is yet to come.
COMMENT AND DISCUSS
blog comments powered by Disqus