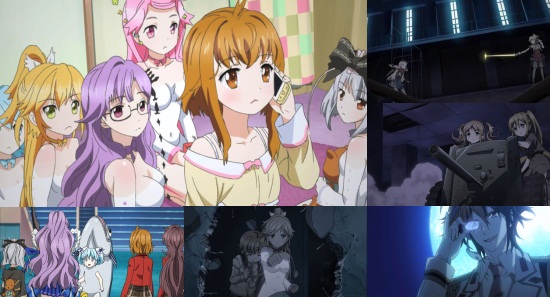 Kiri Haimura is a high school student who has a thing for hair. He admires it, his catchphrase is ‘the hair makes the girl’ and he even carries around a pair of hair scissors in his pocket (making a mockery of scissor safety etiquette). After getting off at the wrong bus stop he encounters Iwai, a young girl shut away in a large dark mansion with the kind of long, lustrous hair he’s only ever dreamt of. Iwai confesses that her hair cannot be cut hence it’s length and her isolation, but no fear because through the magic of the plot hammer, Kiri’s scissors just happen to be those used by a long-dead serial killer which have amongst other things, the ability to cut Iwai’s hair. Oh, and they’ll also turn him into a psychopathic killer.

In a lot of ways this is very traditional fare – Kiri is our hero and he’s going to defend the heroine and probably manage to work his way up to a chaste kiss on the cheek by the end of the series (despite indulging his fetish with her at all hours, even whilst she’s naked) - Iwai will grow up and learn to be less timid, the mysterious professor will probably betray everyone and so forth. What’s keeping things original and what kept me intrigued enough to want to keep watching is how the show defines itself by trying to make its audience uncomfortable. Rather than straight-up laughs or random dismemberments the series creators are almost daring you to admit to being turned on by whatever they come up with next. Even the central premise of the series, that the ‘killing goods’ will eventually corrupt their owners into beings that only desire to kill for pleasure, is an extension of this Cronenburg-esque eroticism taken to its most extreme length. Whether or not the series can maintain this is another matter but it certainly makes for a compelling opening.

Visually, things look brilliant and Studio Gokumi (best known for Saki - Episode of Side A) does an excellent job with some great character design and animation (though one hopes that their involvement won’t mean month long gaps between episodes this time). As you might expect, the hair in particular benefits from very fluid animation. The only downside comes from what I can only assume is a concession to the censors in which, during all the action scene,s the colour completely fades out leaving everything a kind of grey-brown which spoils the aesthetic somewhat. I suspect that this is a considerably cheaper way of removing excessive blood rather than re-colouring/editing as some other shows have done in the past.

Although I wasn’t expecting much from the series, I’ve certainly been pleasantly surprised by it and I’m definitely looking forward to seeing what’s coming up. I’d certainly recommend this though perhaps only to the older members of our audience.

You can currently watch The Severing Crime Edge in streaming form on Crunchyroll.

7
A weird concept and a worryingly intriuging beginning...
COMMENT AND DISCUSS
blog comments powered by Disqus