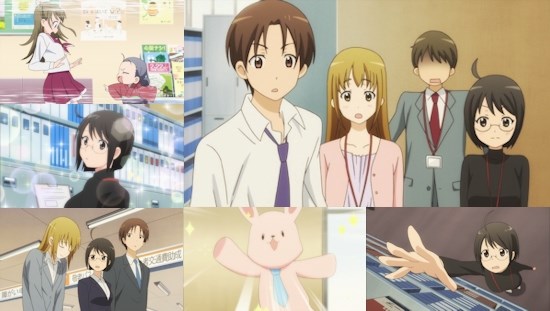 Although we wouldn't quite categorise it as a comedy classic, Working (or Wagnaria as it was renamed in English speaking territories) was a great recent example of a strong anime sitcom - set in a family restaurant and with an endlessly entertaining cast of characters to-hand, it belied its simple setting to fill two entire series (although we only officially got a UK stream of the first) with laughs aplenty.

Now the author of Working, Karino Takatsu, is reunited with A-1 Pictures for another manga adaptation in the form of Servant x Service. This time around the setting is a front-facing civil service office that has to deal with the general public on a daily basis - not an obvious setting for a comedy perhaps, but just look at what our own British comedy The Office managed to do with such a premise.

We walk into this particular the office courtesy of a trio of fresh-faced new hires. Of course, all three of them are largely than life once we drill down beyond their early nerves as new employees - first up we have Yamagami, a young woman out to get revenge for whoever accepted her birth certificate to lumber her with a ridiculously long-winded name; then there's Yutaka Hasabe, a work-shy womaniser; finally we have Saya Miyoshi, a first-time worker and former college graduate with a rather quiet and nervous disposition.

As these early episodes develop, we meet a few more regular characters, including the direct supervisor of this trio, his troublesome little sister and a temporary worker who doesn't work full-time simply so that she can run off and cosplay at events at the drop of a hat. Oh, and a talking rabbit.  None of these characters feel particularly unique per se (rabbit aside), and some of them in particular threaten to be a little too clichéd in their behaviour, but somehow these opening instalments just about pull off making these individuals likeable and enjoyable to watch as they all bounce off one another in this office environment.

As it works to build up its setting and cast, Servant x Service isn't particularly quick out of the gates - its first episode isn't especially memorable at all. However, as the show settles down and goes about its business, so the humour picks up and the laughs become more frequent, and by episode three there's a decent vein of comedy to sink your teeth into as the show mixes in every-day observational humour from "wardrobe malfunctions" and dealing with difficult customers through to some more surreal moments or oddball moments.  Throw in some romantic tension that looks set to grow further as the series progresses and you have a decent blend of elements that might just make up for any deficiencies exhibited by its characters.

Visually, and ignoring the fantastic and terrifyingly catchy opening credits, Servant x Service is very much a case of "good enough" - given its setting and goals it doesn't need to be a tour de force of animation, so instead it focuses purely on delivering what it needs to, which in this case seems to largely consist of the most over-active "ahoge" ever committed to the small screen!  Alongside this, the show's voice cast exhibit a solid sense of comic timing and put in a good shift to keep things moving.

Ultimately, Servant x Service promises to be (unsurprisingly) a lot like Working - it isn't going to be heralded as a comedy classic, and it might not even be the kind of show you'd want to buy a physical release of, but as a dose of weekly streaming comedy it does enough to put a smile on your face and a spring in your step every week.  Coming home from the office to watch a show about working in an office might seem counter-intuitive, but then again most of us aren't managed by a talking stuffed rabbit.  If only all bosses were so adorable...

You can currently watch Servant x Service in streaming form on Crunchyroll.

7
A decent start that gets funnier by the episode - but will it have the legs to carry that humour through the entire series?
LATEST REVIEWS
Girls' Last Tour