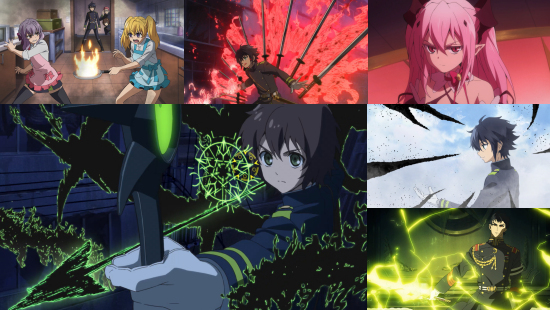 The first series of Seraph of the End was a curious affair - a well-presented and reasonably entertaining series that nonetheless never quite felt comfortable in its own skin. This state of affairs is almost entirely on account of its source material, which chops and changes the thrust of its story as it tries to find a formula that works, and it's a situation that still hasn't really settled down as we enter this second season of WIT Studio's adaptation, subtitled Battle in Nagoya.

After the events of the first season, there's some visible friction within both the vampire and human factions that exist within this fractured world, all of which revolves around Yu's shocking transformation at the end of the last series which gives us a pretty heavy hint of his importance to the future of this on-going conflict. On the human side of matters, there are some alarming question marks appearing surrounding Guren's goals and how he's willing to achieve them, while the powerful Hiiragi family are also both interested and suspicious of recent events into the bargain. Meanwhile, vampire queen Krul Tepes finds her position in jeopardy as her own links to events begin to surface, much to her chagrin.

Thus, these early episodes of Battle in Nagoya are largely concerned with political machinations and in-fighting on each side of the fence - if we were already questioning who the "good guys" or "bad guys" in this story are, things are even less clear by this juncture. It should be noted that this is in no way a criticism - the fluid shifts in this war and the behaviour of both sides is actually one of its more compelling aspects, and although the series is happy to hunt about element of the story's big picture, there's still plenty left laying stealthily in wait for anyone willing to invest themselves within it.

However, this focus on inter-personal relationships does leave these episodes light on action - we get some brief reminders of how Seraph of the End's weapons and combat can be pretty cool to behold, but clearly things are only going to really come to life in this regard a little later in the series. If this a worry for you, then you shouldn't overly concern yourself - the title of this second season itself is something of a spoiler that we're building up to a battle in Nagoya!

Thankfully, even without non-stop action to rely on there's enough to keep the series ticking over nicely - more background on the show's "Cursed Gear" is much appreciated, and above all else there are some great characters to be found throughout Seraph of the End's world. While Yu and Mika are your pretty typical pair of fated "frenemies", Tepes in particular is proving to be an increasingly interesting character, and I also spy an opportunity to sing the praises of Shinoa, who is simply a tremendous member of the cast. In fact, it is Shinoa that is frequently tasked with carrying the entire series on her back - she provides a love interest without turning into a simpering wreck every time Yu looks at her, acts as a self-determined young woman who pushes matters forward confidently, and delivers drama and comedy with the ability to switch between the two seamlessly at the drop of a hat. Where the series might otherwise struggle, it's normally she who rescues it from any hole it might be about to fall down.

Visually, Battle in Nagoya remains as appealing as its first series - its animation quality can be a little variable but its character designs are wonderful and its backgrounds striking to ensure that the series is always engaging to the eye. The rest of this second season's presentation is a little less engaging though - its opening and ending themes and animations are far less memorable than their predecessors, and the voice cast perhaps don't have quite the edge they did the first time around, although that may be more down to the content their working with rather than anything else.

While we can sit and pick at some of the issues that have been inherent throughout, there remains something entertaining at the core of Seraph of the End - we can cynically point out how its ever-changing focus indicates a series trying to find a way to get its hooks into the viewer, but this variety in its scope and focus actually proves to be one of its strong points, allowing us to get to grips with various aspects of its world, politics and characters. If you're looking for a more traditional, action-packed shonen series then you'd be forgiven for yelling at this second season to "get to the good bit", but as something within that genre which treads a slightly different part this remains engaging fare.

You can currently watch Seraph of the End: Battle in Nagoya in streaming form on Viewster.

7
These early episodes are more interested in politics and characters than action, but the shifting focus of the series is exactly what keeps it fresh.
COMMENT AND DISCUSS
blog comments powered by Disqus