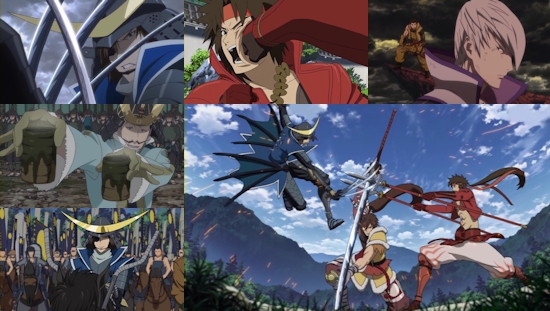 It's become de rigueur in the anime industry to follow up a successful TV anime series with a theatrical movie these days, with the format offering both more creative freedom and a faster (and potentially greater) return on your investment than relying on television broadcasts as a precursor to physical media and merchandise sales.

So it goes that we find ourselves looking at the latest in the line of such movies to reach the UK, courtesy of action-oriented video game adaptation Sengoku Basara. With two series under its belt, the franchise now moves to the big screen (then back to the small screen for this DVD and Blu-Ray of course) to deliver the next instalment in its frankly bonkers story.

If you aren't familiar with the Sengoku Basara story (and in the interests of full disclosure your reviewer here is in just such a situation), then The Last Party begins with a four minute, lightning-fast recap of the events within those two TV series - a blur of names and occurrences that is far too much for any normal human being to ingest to any acceptable degree, but just enough to lay the foundations for what is to come.

Set immediately after the events of the second series, it's no time at all before the uneasy sense of peace is not so much disrupted and shattered entirely, as two of the defeated and destroyed Hideyoshi's henchmen set out to avenge the death of their beloved leader. Of course, this quickly brings them into contact with the real stars of the show, Date Masamune and Sanada Yukimura, as Ishida Mitsunari shows what he's made of by slicing his way through all-comers in his past on his quest for vengeance.

From here, the film bubbles and builds via cheesy dialogue and some ridiculous (but admittedly) entertaining action sequences to its big climax, drawing together all of the various forces of this unique Sengoku period world into a final, mammoth battle against the threat that Nobunaga himself could rise from the dead to wreak havoc once more.

Take any of Sengoku Basara at face value and, to be honest, it all looks rather silly, and the same can very much be said of this feature-length movie outing - it's over-the-top in both words and deeds, using its period setting as little more than a jumping-off point to its overblown premise. Thankfully, this film leans so heavily into this insanity that it largely pulls it off to provide some decent entertainment, whether it's a battle that involves horses that somersault, twist and turn while being ridden at speed by their owners or characters that become little more than caricatures in the name of comedy. Indeed, the film's big action set pieces really show Sengoku Basara at its best, both in terms of its visuals which are filled with colour and movement during these moments as well as its entertainment value. Throw in a superb soundtrack, penned by Hiroyuki Sawano (most recently notable for his work on Attack on Titan's musical score) and you have an engaging package whenever the film's cast comes to blows.

Not that this can hide some of the issues which plague The Last Party, namely all of the bits that aren't action scenes. Admittedly, some of these issues are most likely lessened if you're a long-standing fan of Sengoku Basara, but even this can't really excuse some of the most stilted dialogue to come out of a theatrical movie since the Star Wars prequels - whether you settle for the English or Japanese audio, be prepared to cringe repeatedly at the film's ham-fisted attempts to progress its narrative. Thankfully, the film moves at a decent clip to keep things fresh, but some of spells in-between those big set pieces still feel like they're dragging somewhat.

In terms of this UK release of the film, we have no complaints - although we only got to take a look at the DVD version of Manga Entertainment's release image and audio quality was good, the addition of a "making of" feature is always a welcome extra on any release, and the film's English dub is strong albeit marred by sounding noticeably like it was produced in a recording studio compared to the far more natural sound of the original Japanese audio.

Overall though, The Last Party is very much one for the fans - if you've thoroughly enjoyed Sengoku Basara's previous outings then there's no doubt you'll jump at the chance to enjoy more of the same. Shorn of that heritage the film is decidedly trickier to recommend, with high points that are adrenaline-pumping and a joy to behold yet too few and far between to be make for a satisfying whole, especially in light of how clumsy the attempts to build the movie's plot between those set pieces proves to be. If you're willing to wait for those highlights to come around, and can withstand the exceedingly daft plot, then The Last Party might just be for you. If you're a newcomer to the franchise or don't have an immunity to over-the-top silliness however, this film will probably be a stretch too far for you.

English and Japanese 5.1 audio with English subtitles.  Extras consist of four-panel theatre feature "Another Last Party", a making of feature, trailers and commercials, and textless opening and ending credits.

6
Entertaining at times, but its enjoyable highlights are too few and far between to leave an impression on anyone but existing fans of Sengoku Basara.
COMMENT AND DISCUSS
blog comments powered by Disqus