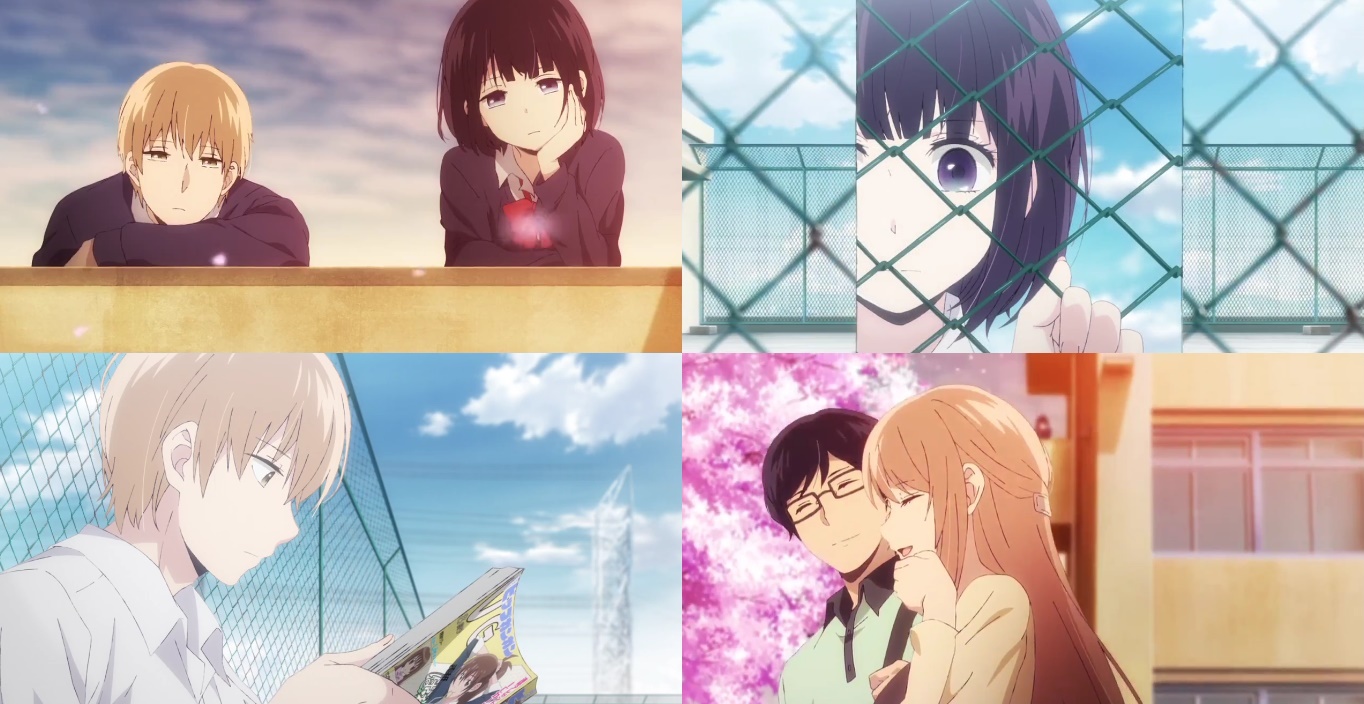 It's clear from episode one that Scum's Wish has a unique and more mature approach than your average romance anime - and not just in terms of its scenes of intimacy. This story doesn't romanticise the unrequited love trope. Instead, the anime shows the hurt, the heartbreak, the loneliness and the desperation that accompanies unanswered love.

The story is mainly narrated from Hanabi's and Mugi's point of view, two characters who are far from perfect. This makes the characters believable; these aren't brave people fighting for the ones they love. These are hormonal teenagers who endure hate, jealousy and heartbreak whilst sellfishly using others to feel less unwanted.
As the story progresses, viewers are introduced to more characters who complicate Hanabi's and Mugi's fake relationship: there is Mugi's childhood friend who makes it no secret she has a crush on him, and Hanabi gets a rather unexpected confession.
The story progresses at a good pace, and even characters who initially come across as dull have a surprising amount of depth to them when their backstory is revealed.

Art-wise, Scum's Wish stands out too: in many scenes, different panels are seen in one shot which makes it feel like you're reading a manga. The soft colours and smooth animation give a dreamy feel to the anime - a strong contrast to the raw, painful theme. The facial expressions of the characters depict their emotions incredibly well - subtle, yet strongly bringing across the hurt and loneliness they feel. Acts of intimacy are also shown - there is no nudity (or at least, not yet) and no full-blown sex scenes, but the anime doesn't turn away from either the topic or acts of intimacy between characters. At three episodes in, these scenes help to progress the plot and don't feel like mere fan service. Accompanying the astonishing art is a great voice cast, who further bring the characters alive. The music is subtle, which befits the anime well.

Most anime with a romantic theme has a predictable plot; two main characters fall in love and everyone lives happily ever after. Scum's Wish has a different approach - there is no love between Hanabi and Mugi at this juncture, with Hanabi even stating: "you can have everything but my feelings". Revolving mostly around heartbreak and suffering, it remains to be seen if this anime gets a happy ending.

There is nothing beautiful or heroic about heartbreak, and Scum's Wish depicts the struggle accurately and unapolagetically. If you are looking for a beautifully animated yet tragic story, this is a must-see.

8
A raw, honest depiction of how much love can hurt.
COMMENT AND DISCUSS
blog comments powered by Disqus