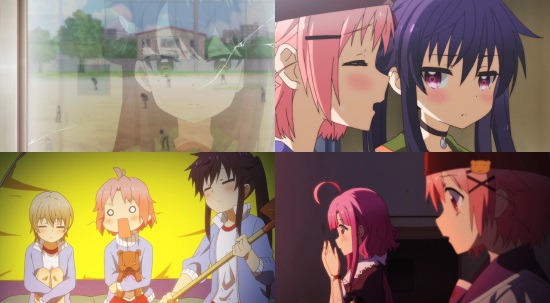 PLEASE NOTE – you really need to go and watch episode one of this series right now to avoid spoilers before reading this review, as its pretty much impossible not to discuss what happens in that episode if you want to review the show in more than ten words, and its far better if you go in cold. A brief spoiler first though: it's really good.

Okay, so now that everyone’s back having watched the first episode (you wouldn’t just have kept reading to see where I was going with this.... would you?) we can safely take a look at the new anime series based on Norimitsu Kaihou's manga of the same name. As suggested above this series has a good opener – in fact it’s probably the best first episode of the season so the concept is clearly sound, but can the series maintain once its dropped the bomb?

Megurigaoka High school is a pretty average school as these things go, with its only real stand-out factor being the presence of the ‘School Living Club’ and its four members who, along with their canine mascot Taromaru, actually live at the school full-time in order to maximise their school lives. The hyper Yuki is our apparent lead, and she’s out to have the most fun she possibly can each day along with her friends and teacher Megumi.

So, since you will all of course have now seen the first episode (no more warnings kids!) you’ll have picked up on the huge revelation that the world the first episode presents us with is a fake. Whilst Yuki fails to notice the blocked off corridors, the broken windows and the strange expressions that pass between her friends, for the audience they build up the tension as you wait for something to happen. When the series then lays its cards on the table and reveals that the happy-go-lucky Yuki is actually suffering from serious psychological trauma and that the happy school life we’ve seen through her eyes is in fact all in her head, the result is very effective. The switch the series makes into zombie-infested horror territory is done with such great aplomb that even with the knowledge that there’s something coming it’s no less effective.

The question has to be asked subsequent to this though is: what else is there left for the series to do? Traditionally this kind of revelation comes at the end of a series/film – there’s not really much story left once you know the secret of Soylent Green after all. School-Live however essentially pulls the Psycho switch - once we’ve peeked past the curtain we’re no longer expected to go back behind it any more, and this is elegantly done by largely switching the perspective to the other characters. Whilst Yuki is still there she’s very much off in her own world and in fact becomes something of an obstacle for the other girls, who want to protect her but are also very much aware that her actions put them all in a lot of danger as they try to survive in the ruins of the school building or venture out in search of supplies. What really helps this is the series ability to really ratchet up the tension in every moment where you need it. Whilst director Masaomi Ando doesn’t have the best CV in the world, he’s really putting everything into this show and frankly just about every horror director in the west should watch this series to understand how to do real horror and not just use ineffective jump scares with loud music all the time. It’s a really masterful job and hopefully we’ll get to see more in this vein from him.

Visually the series isn’t going to be winning any awards in a season where Gangsta is airing, but it looks good and the animation is solid. There are a few interesting visual ideas around too with the zombies themselves and most of the blood and violence being depicted off-camera or with the bare minimum of detail. It’s difficult to know whether putting more into this aspect of the show would have enhanced or detracted from the way the series builds up the tension and horror, but overall it’s not something you’ll miss either.

These first five episodes essentially deal with setting up the scenario and providing back-story for four of our leads leading up to their surviving of the zombie outbreak (only Garden club member Yuri lacks one, but her back story is so tied up with that of the others she might not get one of her own). If the series can continue on like this then its easily going to be one of the stand-out shows of the year let alone just this season. The execution is fantastically good and the set up is a really neat spin on the now decidedly aging zombie storyline. Forget The Walking Dead and let the Japanese show you how to do zombies on TV!

You can currently watch School-Live! in streaming form on Crunchyroll.

9
So compelling you might not notice them coming up behind you...
COMMENT AND DISCUSS
blog comments powered by Disqus