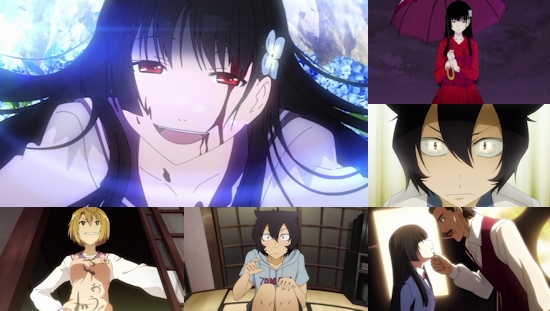 Chihiro Furuya loves zombies. I don't mean that in a broader cultural sense either - he literally loves zombies, and would love nothing better than to be able to date a zombie girl for reasons that even he can't quite explain beyond a long-standing love of horror movies. Of course, in spite of this fantasy even Furuya knows that zombies aren't real, and certainly not in a sense that would allow for any kind of romantic entanglement, right?

Our protagonist's fascination with the undead takes a rather different turn when his pet cat, Babu, is killed in an accident - unable to cope with the idea that his buddy is gone without even a chance to say a final goodbye, Furuya resolves to reanimate his pet using a book he discovered claiming to offer the secret recipe to do just that. The trouble is, a pivotal page of this tome is damaged so as to be unreadable, leaving Chihiro puzzling over what the missing ingredient might be.

While spending his nights in an abandoned building complex trying to fathom the missing link in this reanimation potion, Furuya also finds himself bearing witness to an unusual scene each night - a beautiful girl who comes to the building to scream away her frustrations with her life, including some rather embarrassing revelations. Eventually, the two catch one another's eye, and so an odd but charming friendship develops between the horror fiend Furuya and the sheltered, innocent daughter of the director of a well-to-do all-girls school, Sanka Rea.

Surprisingly, Rea is not at all fazed by Furuya carting a dead cat around with him, nor his obsession with zombie's and horror films - indeed, she ends up actively helping him to figure out the missing ingredient in his reanimation potion, and is more than a little disappointed when it seems that his experimentation has reached an end. However, this is just the beginning of the pair's adventures, as her over-bearing father's reaction to her nightly disappearance from their lavish home it about to make Furuya's dream a reality...

Perhaps the most impressive thing about Sankarea is that it manages to avoid falling into many of the pitfalls that it creates for itself. For example, Furuya seems all set to be a creepy, unlikeable protagonist but turns out to be a charming, even-tempered lad with his head firmly screwed on his shoulders, while Rea could manages to rise above being a slice of fan service-laden wish fulfilment to show moments of strength and growth on her own. On the flip side of that same coin, the behaviour of Rea's father towards her could so easily have been played for grotesque titillation, but instead he's painted as exactly what he is for the most part - a disturbing, broken man worthy of scorn and pity in equal measure.

This treatment of its cast broadly enables Sankarea to be greater than the sum of its parts - what could have been a supernatural harem with a lazy zombie hook and nudity and panty shots by the bucket load instead turns into a pretty entertaining and occasionally thoughtful affair that shares some DNA with Mysterious Girlfriend X (wait, that sounded more icky than I meant it to...) in its pubescent male viewpoint of girls as some kind of indecipherable and supernatural mystery, both beautiful and utterly terrifying at the same time. If you're expecting a cavalcade of breasts from this uncensored release, then you'll find that most of the nudity is implied or partly covered save for the odd nipple, and any other fan service is pretty brief and low key relatively speaking.

The biggest issue that the series has is with regards to its pacing - some parts of the series outstay their welcome and drag considerably even when it's already clear where the story is headed next, we find ourselves shunted into a side story at one point when more exciting things are coming to head within the main narrative, yet others moments feel like they would be better served with some more time afforded them. Given that the original source manga hadn't finished at the time the series aired, it also suffers from that age old problem of anime adaptations that is the non-ending - we're given hints about Furuya's family that are clearly hooks into massive revelations that are never paid off within the confines of the series, and the show's love triangle is never fully resolved even if it is left in a reasonably satisfactory state of affairs.

Studio Deen are on production duties for the series, and although this means that Sankarea's general animation quality is tending very much towards average, there are plenty of smart touches and flourishes throughout the series that elevates the show's aesthetic and makes it far more eye-catching to watch in a way which complements its easily recognisable and broadly appealing character designs. This leaves us with the feeling that we're probably no missing too much from the lack of a Blu-ray release on this occasion, and the DVD transfer on show here is perfectly acceptable.

Beyond that, we did run into one scene at the start of an episode with decidedly messy subtitles which frankly didn't seem to make much sense, but that exception aside the subtitles are proficient and the English dub respectable in carrying the intensions and emotions of the show required of the cast to ensure a good viewing experience regardless of your preferences.

As the credits roll on its final episode (and we should note that this release contains the OVA "episode 13" as well as all of the episodes from its Japanese TV broadcast run), I do have some mixed feelings towards Sankarea, but the overall impression it leaves is a positive one. Its pacing is uneven as it plods at times yet breezes through major events at others, but its heart is in the right place and it has the characters and scenario to hit most of the right notes when it comes to its drama and romantic comedy elements. Its place as an incomplete story compared to the now complete source material might leave you wanting to check out the manga instead, but that isn't to say that Sankarea has nothing to offer in animated form, and it's still enjoyable to watch in its own right.

English 5.1 and Japanese stereo audio with English subtitles. Extras consist of US cast commentary tracks on episodes 3 and 11, textless opening and closing credits, and a US trailer.

7
Uneven pacing and a non-event of an ending strip away some of its enjoyment, but there's still a charming show with a lot of heart to be found here.
COMMENT AND DISCUSS
blog comments powered by Disqus