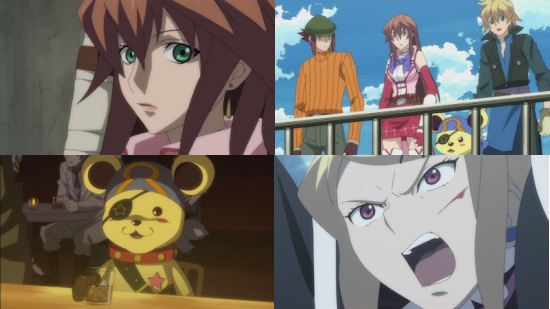 Typically speaking, there are two kinds of video game/anime tie-in - Bad ones and terrible ones.  When even high profile efforts such as Halo and Final Fantasy don't quite succeed in setting the world alight (for anime fans at least), it's hard to hold out too much hope for Sands of Destruction, an anime created to coincide with the release of a SEGA-produced RPG on the Nintendo DS and going by the far, far cooler name of World Destruction in its native Japan.  Still, with Production IG's name on the production credits, perhaps we can hold out hope for something altogether more impressive from this particular effort?

The series certainly begins promisingly enough, introducing us to a world where humans have found themselves over-run and enslaved by so-called Beastmen - A miserable state of affairs for humanity, and one looking to be deposed by the World Destruction Committee, a group themselves opposed by a set of individuals at the call of the Beastmen known as the World Salvation Committee.  At the forefront of the World Destruction Committee is a woman known as Morte, with a thirst for vengeance and a decidedly short fuse - certainly facets to make her a perfect employee for anyone looking to bring about the end of the world, even before we take into consideration the fact that she has in her possession the Destruct Code; the item which is supposedly the key which unlocks the end of the planet itself.

Via the usual string of serendipity and lucky coincidences, Morte eventually finds herself joined in her quest by an unlikely pair - Kyrie, a rather cowardly fellow working in a cafe by disguising himself as a Beastman and Toppy, a liquor-drinking bear with an eye patch.  No, really, you didn't read that wrong.  As Kyrie and Toppy get caught up in Morte's world and goals (albeit far from voluntarily in all honesty), so we see suggestions begin to form that the former of the two individuals is of more importance to the future of the world than anybody could have predicted...

After an opening episode that holds so much promise in terms of both character design and the way introduces its primary elements, Sands of Destruction soon drops disappointingly into the same old routines so beloved of other shows of this ilk - Our trio of heroes get captured and have to escape, a character runs into an old friend only to find that he's turned to the "dark side" in the name of money (after being captured first, naturally), or the gang become trapped in a submarine alongside their enemies, forcing them to forge a temporary truce so that they can escape and survive.  These are all plot concepts that are as old as the hills, which isn't necessarily bad in itself, but they're executed with such a lack of imagination or effort here that the whole thing soon becomes snooze-worthy.

This sense that the series is simply "going through the motions" is a genuine shame, as Sands of Destruction as a whole is book-ended by good episodes at its beginning and end, with a climax that actually works rather well.  Add to that the largely imaginative character designs (aside from one instalment where we visit a city inhabited by robots, where the character designers were clearly on holiday or something) and there is some promise to the show - If only that promise had been properly utilised, we might have ended up with something decidedly less mediocre than show we're presented with here.

Still, as a marketing effort for the Sands of Destruction game (which hasn't made it to the UK to my knowledge) I suppose at least it seeds enough interest in said Nintendo DS title to have achieved its own particular goal - Not that it's enough to make it a series particularly worthy of your viewing time unfortunately.

Sands of Destruction can currently be viewed in streaming form on the FUNimation YouTube channel.

6
A decent concept and good character designs are spoiled by mediocre and dull plots.
COMMENT AND DISCUSS
blog comments powered by Disqus