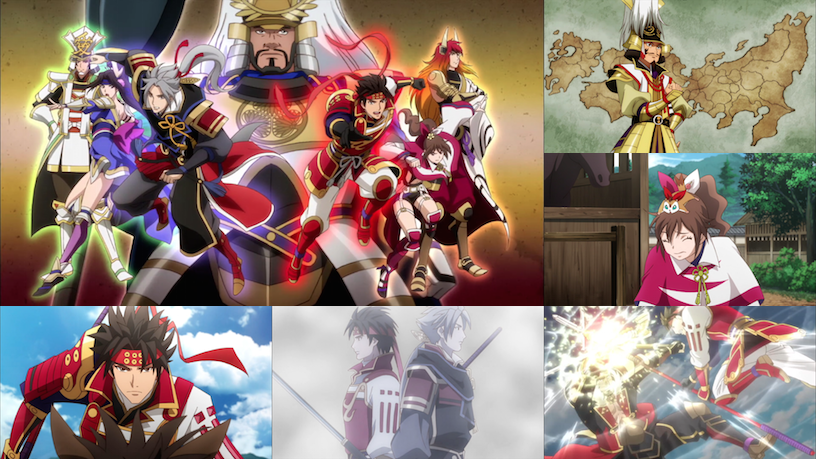 Anime series adapted from video games always prove to be a rather hit or miss affair. One that truly captures the spirit of the source material is like a diamond in the rough, so more often than not you’re left with one that seems to miss the point almost entirely. Nevertheless they've proven to be as popular source as ever for new shows, and this season it’s the turn of Koei’s Dynasty Warriors spin-off franchise Samurai Warriors (also known as Sengoku Musou).

Samurai Warriors is based upon the Sengoku (or “Warring States”) period - a time in Japanese history marked by political struggle and constant military conflict. The anime in particular will focus on the “troubled fate” of the Sanada brothers Yukimura and Noboyuki, depicting a romanticised version of the events that drove them apart. Despite having fought side by side all their lives, Yukimura will now have to battle his own brother as the resurgence of the Warring States period takes them in two difference directions.

To kick things off before viewers dive headfirst into the television series, Crunchyroll have also uploaded a 48-minute OVA which acts as a prequel of sorts to the main event. This OVA provides all the relevant back story you’ll ever need for the Sanada brothers - how they lost everything only to rebuild it together, while at the same time kicking samurai ass in the way you’d expect from overpowered protagonists. It also introduces some of the other key characters of the series, as everyone is pitted against each other in a setting that nicely captures the political strife of the Sengoku period.

Not that this ends up making all that much difference, because episode one then opens with a rather sizeable time-skip. We’re now at the final battle before the unifying of Japan by Toyotomi Hideyoshi, and all the characters that were fighting against each other in the OVA are now allies. Coming from the OVA this feels like a huge hurdle to get over, let alone using this as starting point for the entire series. But don’t get too caught up in the celebration of Japan’s unity, because the second episode brings along yet another time-skip. This time it marks the death of Hideyoshi, and how quickly everything he achieved beings to fall apart at the seams. Given how Hideyoshi was barely in either of the episodes it suggests that the time-hopping is mostly there so that key events are properly covered before the main story begins, but honestly it’s nothing that the pre-credits narration couldn’t have handled far more succinctly.

The Sengoku period is a rather lengthy time in Japanese history so it’s no surprise that there’s quite a lot of key events that at the very least need to be glossed over, but Samurai Warriors introduces names and places at such an alarming speed that it is almost impossible for anyone not already in-the-know about Japanese history to take it all in and actually remember everything. What also doesn’t help is that these episodes are just so unashamedly dull. With the promise of a samurai anime it’s reasonable to expect a fair bit of action (especially one derived from a game born of Dynasty Warriors - a franchise which seems to pride itself on having as much going on in fight sequences as possible), but so far Samurai Warriors has mostly been the characters just talking. Sitting and talking, standing and talking, walking and talking - if you can do it, they’ve done it while talking. Rather than feel like the experience of playing Samurai Warriors without actually doing anything, this instead feels like the cut scene you just want to skip over as soon as possible.

With the games being such a successful franchise one might expect the anime adaptation to at the very least look fantastic, but sadly this isn’t really the case here either. The animation duties are a co-production between TYO Animations and Tezuka Productions - the former is still a relatively new studio with little under its belt, while the latter was founded by Osamu “godfather of manga” Tezuka and is responsible for the likes of Kids on the Slope as well as Astro Boy. But despite one half of the team’s reputation, the end result is nothing out of the ordinary. For any other genre it would probably fare better, but samurai command a certain level of quality in order to be a success which this show just falls short of achieving. Thus far only the OVA has shown any interest in portraying the sheer size of these battles, predictably utilising CGI models for anyone other than the main cast (or any soldier that just happens to be in the forefront). The idea itself isn’t so much a bad thing, but when you can visibly see the same character models repeating exactly the same actions millimetres away from each other it does take away the scale of the whole thing. This is a show that looks to be much better suited to the smaller scale, with the main characters duking it out with their over-the-top video game style attacks. At the very least, the character designs are accurate to their video game counterparts, and you’ll know which characters are the important ones by how outlandish their outfits are in comparison to everyone else.

Samurai anime isn’t something that’s in short supply, and unfortunately from these early episodes it feels like Samurai Warriors won’t go down as anything more than yet another forgettable video game adaptation. Semi-accuracy to real events is commendable, but newcomers are likely going to be left cold by its constant introduction of names and places with no real context. Fans of the franchise are likely to get more from it, but probably nothing they won’t have gleaned from playing the games in the first place.

You can watch Samurai Warriors in streaming form on Crunchyroll.

3
Fans of the game series will probably get a kick out of this, but anyone else may be better off simply picking up a history book.
COMMENT AND DISCUSS
blog comments powered by Disqus