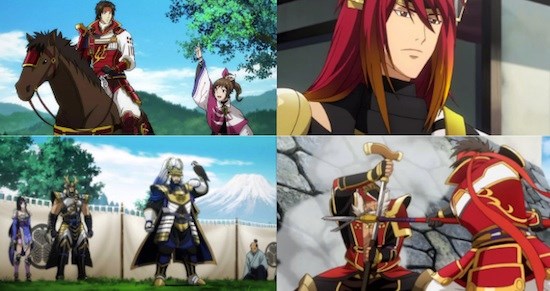 There’s a certain, particular joy when it comes to Koei Tecmo’s "Musou" series of games. From the epic Dynasty Warriors (clocking in at eight installments and counting) to various anime-themed spinoffs - including One Piece, Berserk and The Heroic Legend of Arslan - the series continues to provide the player with the immeasurable pleasure of mowing down endless hordes of men with repeated, frantic button-presses. Samurai Warriors is no different - drawing from Japanese history’s rich seam of prestigious generals and pitting them against each-other in a checklist of titanic, noteworthy battles, it’s like every kid’s "Who’s stronger?" battle-fantasy turned real. Through it all, that very simple core concept: You can be those very same generals, and you can fight those very same battles.

Set in the ‘Sengoku’ Warring States period (roughly AD 1467 - 1603), the plot of this anime incarnation of the franchise centres around the conflict between the Toyotomi and Tokugawa clans, focusing in on the perspective of the Sanada brothers; Yukimura and Nobuyuki. To complicate matters, Yukimura has sided with the Toyotomi clan, while Nobuyuki has taken the side of the Tokugawa, laying the groundwork for a ‘fateful battle’ between the two. All this has the makings of a powerful, stirring epic about familial bonds and fraught decisions between duty and emotion - but unfortunately, it’s almost instantly hamstrung by some positively woeful execution.

Things start in medias-res, the show throwing us quickly into the cut-and-thrust of the action, largely expecting you to know the phonebook-sized list of key players already. Instead of taking the time to really build up our emotional attachment to the characters through nuanced interaction, they’re merely slapped on a plate for us, complete with name-tags. All this isn’t helped by some incredibly cheap-looking, unattractive character designs. While the games have always had a distinctly sharp, bombastic clarity to them, the versions of the characters presented to us here feel like plastic, mass-produced copies.

The flaws don’t stop there - if a bunch of serious-sounding generals standing around discussing military tactics gets you all hot under the collar, fantastic. If not, you're in store for one heck of a dull time. There’s a lot of talking in this show, and when the characters themselves finally put a lid on it, the narrator jumps in to fill the void - where other shows might attempt a modicum of subtlety and a show-don’t-tell approach, Samurai Warriors never stops ‘telling’.

The action scenes, when they do arrive, are little better. While they arguably capture a decent approximation of the games’ one-vs-many thrills, they are so limited in their ambition and general animation quality that you almost find your eyes glazing over. We recommend anyone watching to play a little drinking game: knock one back whenever the show falls back on the good old ‘still frame’ to depict an action scene - you’ll be absolutely smashed before the series is even halfway through (Please drink responsbily! - Ed). When it’s not resorting to still frames, the show will mix in crude top-down, table-top gaming style diagrams to depict troop movements - while this may be in keeping with the military feel of the series, it once again shatters any kind of real emotional investment in the conflicts themselves.

In the grand scheme of things, we’re hard-pushed to find anything positive at all about the show’s treatment of the subject matter. Character deaths are injected with a decent stab at pathos - but in many ways, by exposing the barest glimmer of emotion in a series largely devoid of it, they only serve to remind us how much better this all could have been if the characters had been better developed beforehand. The ultimate irony is that the post-credit chibi-style sequences that bookend each episode are actually infinitely more entertaining than the main show itself. Repurposing the characters into a comedic high-school setting, they contain more humour and personality in 30 seconds than the show proper manages in hours.

When it comes to audio options, we firmly recommend sticking to the Japanese for this one. Befitting of the show’s lacklustre execution, the English dub voice cast sound bored out of their minds working their way through this utter chore of a script - the bulk of it playing out like someone reciting from the driest history textbook known to man. It’s a shame, too, as many of them have delivered far better work on other shows, but hearing them here chewing through a mountain of long Japanese names as best they can only breaks the immersion further.

Samurai Warriors’ chief frustration though is knowing how many other series have handled this kind of fare so much better. Take, for example, Sengoku Basara - which through virtue of Production I.G’s ambitious animation managed to apply real dynamism to the very same era of history. Or, alternatively, leaning toward a more fantastical bent, series like Lord Marksman & Vanadis or Alderamin on the Sky proved that you can do the whole ‘military tactics’ thing in an exciting, engaging manner. In the hands of studio TYO Animations though (the bulk of whose most notable work is largely limited to OVAs and the second series of Terra Formars) Samurai Warriors is just one long, impossibly dull trudge.

The Samurai Warriors games make you feel powerful. There’s an exquisite, tactile adrenaline rush to them as you mow through your enemies, cleansing vast swathes of them off the map with a mash of the keypad and a flick of your weapon. They feel muscular, alive - and most importantly, fun. But with the anime, there’s only dull exposition, cheap animation and an endless litany of Proper Nouns.