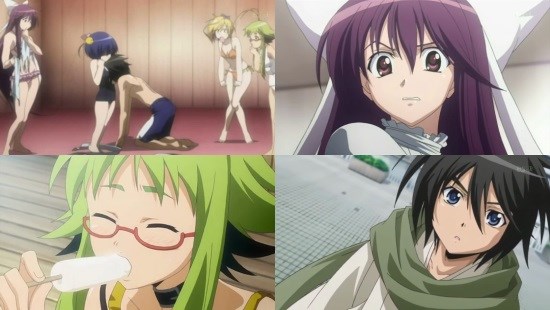 What’s in a name? Well, if you’re looking to sell anime in the west then a name could maybe mean a sale or two if you assume that people won’t buy ‘Ai Kuro Aka’ (a name I made up) unless you put it on shelves as ‘Cat Party Heaven’. Whilst the reasons for changing titles is easy to understand it’s still annoying especially since new western titles are almost invariably stupid, cheap and using the most low-brow method of marketing possible hence some amazingly badly made up titles such as Cat Planet Cuties (instead of Asobi Ni Iku yo or ‘Let's go play’) and Battle Vixens (instead of Ikkitousen or ‘Knight who matches a thousand knights’). Now in the finest traditions of this naming strategy Asu no Yoichi (Tomorrow’s Yoichi) becomes Samurai Harem because there’s a samurai in it and there’s a harem in it. A title like that gives you certain expectations for a series, so can this freshly re-named series deliver?

Yoichi Karasuma has spent the entirety of his seventeen years training in the mountains under his father, never venturing into the wider world until said father, who has become exasperated that he has nothing left to teach his son, sends him into the city to stay at a dojo to continue his training. The dojo itself is home to the four Ikargua sisters who, it has to be said, have mixed feelings about living alone with a 17 year-old boy (their parents are no-where to be seen naturally) and... well, frankly you can see where this is going.

Let’s make one thing absolutely clear. Samurai Harem, no matter what title you put it under, is an incredibly bad show. It is, in fact, so uniformly bad that it’s difficult to know quite where to begin. Let’s start with the plot, which is basically the plot of any harem show you’ve ever seen except that in this case the action is set in a dojo and our characters are all martial artists. There are occasional fight sequences which take place but these seem to mostly exist to justify the whole martial artist angle, which in turn exists solely to try and have some clothes ripping stuff going on because Ikkitousen still makes a lot of money doing the exact same trick. That’s it. Literally.

You could argue that the series doesn’t want to do anything big and just wants to be an excuse for gags and fan service to happen which is fine... if it did that well. As it is the gags are all so over-the-top and ham-fisted that they aren’t even remotely amusing. The fan service, even if it weren’t hampered by the visuals, isn’t well done either and plays as incredibly flat and boring. Perhaps this could have been saved if some of the cast were in any way interesting to watch but they’re such relentlessly dull, by-the-numbers characters that they’re in constant danger of being outdone by the time counter on the DVD player (which if nothing else brings with its slowly ticking numbers the promise that the show will end).

The show originally aired in 2009 but the animation and character design look like they hail from decades before, as it’s all just bad on so many levels that it’s a wonder that the characters manage to stay on-model as much as they do.

In short, Samurai Harem is an out-and-out stinker, the sort of trash that one assumes MVM Entertainment must have been forced to pick up in order to get to a licence that’s actually worth having. If you’re looking for a show that tickles your need for fan service, harems or samurai then this is absolutely not the show for you. There are a whole slew of other shows released around the same time as this one, and no matter how bad they may be they’re by far a better use of your time and money than Samurai Harem.

2
Tired, bloated, flacid, unoriginal and not worth a single second of your time.