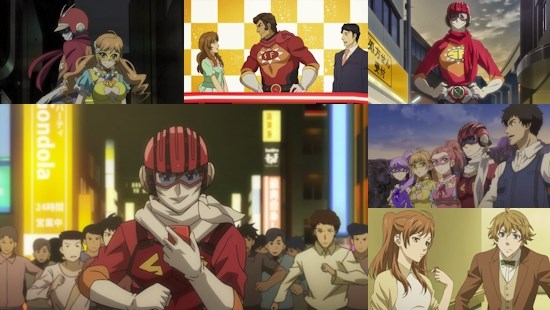 Who says that what you watch on TV doesn't influence you? Certainly, in the case of Samurai Flamenco's protagonist Masayoshi Hazama it seems as if television and popular culture has influenced him far too heavily.

More specifically, Hazama is a huge fan of super sentai series, and has spent his life marvelling at the colourful heroes of justice that have filled his vision. As role models go, looking up to those who will always fight for the weak and needy is certainly no bad thing, but Hazama has chosen to take things one step further and become a hero himself. If he'd been imbued with superpowers from some kind of toxin, or otherwise been an abnormally strong human being, then maybe he'd be cut out for a life of heroism, but Hazama has none of these going for him - by day, he's an up and coming model, and by night, he dons some faintly ridiculous clothing to pursue justice in his own way; a way which more often than not involves telling people not to put their rubbish out too early or not to litter in public.

This smallest of small-time heroes almost comes a cropper when he's stumbled upon by Goto, an off-duty police officer who finds Hazama stark naked in an alleyway after one of his acts of heroism has gone rather awry. Luckily for Hazama, Goto is a pretty easy-going fellow, and as the pair continue to cross paths in the course of their fields of work so a friendship blossoms, even if it is a rather exhausting one for Goto at times.

More by luck than judgement, Hazama - or rather his Samurai Flamenco alter-ego - turns from a little-known resident weirdo to something of a celebrity, as events conspire to see his star rise to the point where rewards are being offered for his unmasking. In the midst of all this, a copycat superhero emerges, and Hazama himself finds his project joined by some rather unusual backers... and not a moment too soon, as the requirements put upon him as a hero soon increase alarmingly.

Perhaps the first thing that we have to say about Samurai Flamenco is that it oozes fun from every pore - every episode is packed with fantastic one-liners and comic vignettes, whether it's the interactions between Hazama and Goto or Samurai Flamenco's escalating misadventures. Put simply, this show knows how and when to be funny, and hits the nail on the head with its humour almost every time to ensure that it never ceases to be hugely entertaining.

Although watching our hapless hero blunder through his rather unique hobby is a lot of fun it isn't the kind of thing that can fill twenty-two episodes, but even with this in mind there are some surprisingly seismic shifts in the show's story-telling throughout this first half, from the introduction of another hero with some very different (and painful for those on the receiving end!) motivations through to some massive and almost jarring twists in later episodes that we really can't discuss in any detail here lest we spoil the surprises. The comedy continues, but with a sense of tension and heart that complements those moments nicely, while the show also proves capable of surprising here and there with a couple of decidedly dark turns.

Suffice it to say then that episode eleven of Samurai Flamenco is entirely different to episode one in terms of its scope, but without losing sight of the humour and warmth of character that it exhibits throughout - it makes the series so far fascinating to watch, as it feels like it might go off the rails and crash like a train wreck at any moment, but somehow manages to stay on track as it careers forth into ever-more ludicrous territory with gay abandon. The result is both a love letter to, and parody of, super sentai and tokusatsu series that needs at least a little knowledge of those genres to be properly enjoyed, but can be enjoyed fully without being a fan of those genres yourself. Our only concern at this point is that the series might start to take itself too seriously for too long, but as long as it carries on down its current knowingly cheesy track then we're most certainly on-board with it.

One area where we do wish Samurai Flamenco could prove itself to be a little more accomplished is in terms of its animation quality - for the most part its passable, but it seems that the deeper we get into the series the more and more terrible it becomes, and by episode eleven its actually laughably bad. It manages to convey everything that it wishes to, so we can't criticise it too much, but if you're looking to watch some top-notch animation this isn't the place to be.

It's still difficult to get any kind of handle on exactly what Samurai Flamenco's ultimate aim is, but regardless it's certainly managed to be a whole lot of fun to watch so far - a series that delivers its story with a knowing wink as it goes about its business. It could all go horribly wrong in its second half for a number of reasons, but right now this is one of the autumn's more entertaining shows, in a season that hasn't exactly been light on pure entertainment.

Samurai Flamenco is available for streaming and download from Wakanim.

Free SD and HD advertising-supported streaming or download (via Adobe AIR), premium streams cost 0.79p per episode or DRM-free download to own at £1.58 per episode.

8
It starts out silly and becomes increasingly daft, but it knows what its doing and delivers comedy and more thanks to a sharp eye for its subject matter and lovable characters.
LATEST REVIEWS
Girls' Last Tour