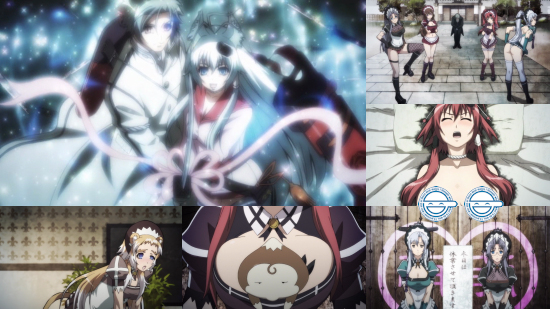 I have been having a bit of a harem anime binge recently. I don’t know whether its the fact its the middle of winter in the South Atlantic that drives my urge for the kind of romantic comedy that only harem-style anime can deliver or what, but I sure am consuming a lot of it. So imagine how happy I was when, on the back of a carrier penguin, arrived the second series of the rather enjoyable Samurai Girls. Only this time, the girls have been upgraded into a Samurai Bride. Considering the sheer amount of perviness and bare breasts of the first series, the sheer thought of what this will entail makes my nose bleed.

I have also stated this in many reviews before, but I honestly think that during my previous visits to Japan, someone has installed a mind reader to probe into the dirtiest reaches of my mind, and used that to produce the concepts for new series. This certainly the case with Samurai Bride at least. After all, I did expect the show to be a little... perverse, especially after enjoying the first season so much, but I didn’t expect this...

For those of you who may have forgotten the basic premise in the long period since the first series was released, it goes thus. Samurai Bride is a direct continuation from Samurai Girls. The series is set in “Great Japan”, which is a modern country where the powers and authority of the Tokugawa shogun are still in place and the country remains under the feudal control of a few major clans forming the Shogunate. Our main male character, Muneakira Yagyu, is the master of a dojo which, through the usual harem means, becomes populated with a number of beautiful girls. One is the princess of the country, another her lolita rival, while others include a pair of their attendants and a peculiarly annoying pest who acts like a dog. Of these, both Princess Sen Tokugawa and her rival Sanada Yukimura have become “Master Samurai” by taking on a pact with Muneakira through the power of his kiss. His ability to be the general of the Master Samurai is born from a pact he has taken with one Jubei Yagyu, a tremendously powerful samurai, trapped in the body of, well, an idiot - a cute idiot, but an idiot nethertheless. At the end of the first series the group had defeated a great evil raised by Jubei’s younger “sister” Gisen (the lass in the first series who almost ended the world) and now they are revelling in their victory. Muneakira had gone on a long training journey, leaving the girls in charge of the dojo, which they have run into the ground.

Unfortunately for Muneakira, their management isn’t quite as he hoped and he returns to find the dojo in the midst of an entrepreneurial makeover. His beloved dojo is now a maid cafe. His samurai are all now maids. Now if only they had customers to pay off the business loan...

Business picks up when the Dark Samurai arrive on the scene. Four ancient samurai, resurrected from the dead by an evil spirit, come to the dojo to challenge Muneakira and his master samurai and, after being truly spanked in every sense of the word, these dark samurai give the dojo inhabitants a further month to prepare for an all-out battle. This is, of course, a diversion to allow them to continue on with their nefarious scheme to destroy the sanctity of the country, but in the meantime it doesn’t mean they can’t partake of some special “service” from the samurai-maids of the Yagyu dojo, does it?

I shall spare you the details of the remainder of the story as this needs to be kept unspoilt for not-so-obvious reasons. All I will say is that from the three master samurai Muneakira has at the beginning, he gains a further four, expanding his harem of fighting power to seven, including a monkey that transforms into a girl to gain her powers. Or something. The number seven is special though, as it is the exact number of master samurai a general needs to transform one of his masters into the Samurai Bride - a special person who has the combined power of the general and his samurai, and is capable of wielding that power to defeat almost anything, thanks to a simply fabulous samurai style wedding gown, complete with fully-functional fox ears.

As silly as I have made everything sound above, I assure you that there is actually a story to be told here, and that Samurai Bride is not just gratuitous fan service series - it has more to be it than a bountiful quantity of samurai breasts combined with a plethora of girl-on-girl groping. No, this is restricted to the first seven episodes, mostly. Kind of. As much as I do enjoy a good bit of fan service, especially of the maid kind (and doubly so of the ample fox-eared kind), it turns out that after a while when it is all you tend to see it puts you off. I found myself praying for a fighting scene of some substance - maybe some story-driven scenes and certainly some dialogue that wasn’t just pointless gesturing between the suitors of Muneakira’s ever-expanding deadly harem.

This fault aside - and lets be honest after watching the first series it isn't really a fault, it's simply to be expected. The second series is basically following the template set by the first - you have your bubbly bathing scenes, meticulous maid scenes, frantic girl-on-girl fighting scenes and, of course, the creativeness of the contest for “best maid cafe” all acting as fluff before the substance. This is the same as previously and, frankly, it's not as if I am sat here for the intricacies of the plot. I prefer my plot to be of the bouncy kind.

Samurai Bride does follow on from the first series in other ways, it has thankfully kept its excellent style of character design and the highly effective animation style which is fluid even during the most frantic of groping sessions. The battles are fluid and I honestly cannot complain about the production values that have been used on the art style. The English dub is still terrible, but thankfully the Japanese is more than adequate, allowing ones such as myself the delight of hearing the happy squeals just as they were meant to be heard. As per last time, the opening and closing songs are a joy, with the closing animations being my particular favourite as they are as adorable as they are ever-changing.

Ultimately, Samurai Bride is hilarious. It is also highly predictable after seeing the first series and many other shows in the genre. It is a perfectly stereotypical harem comedy insofar as the male character is completely lacking in testicles and still does nothing to actually convey any affection other than being caring and offering a kiss now and then to make the girls transform. Jubei is still the highlight of the series, and even though she is an idiot in her normal form she does eventually rise to the stardom of being granted the sanctity of fox-ears upon her head which are unbelievably cute, if unfortunately short lived.

Samurai Bride is an absolute hoot, a worthwhile investment if you enjoyed the first series, and it isn’t half as perverse as I have made it out to be, honest.

English and Japanese stereo audio with English subtitles. Extras on these discs consist of textless opening and closing credits, Japanese Blu-ray trailers and promos, and most importantly some Samurai Bride shorts - seven short (three minute) episodes that verge on the very pervy, and funny. Most of these involving the girls, lots of groping, and a buffet of bare naked bosoms in a variety of delicious situations. It says a lot when “Project Big Boobs” is one of the titles...