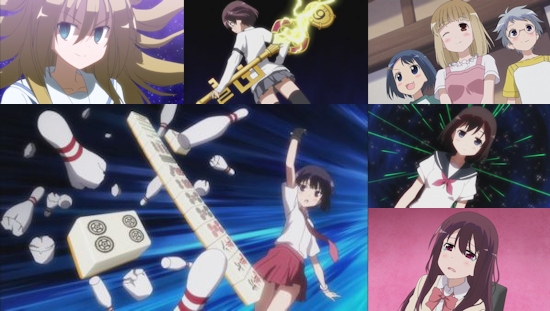 It's been a long and laborious road to completion for Saki side story Episode of Side A - a fact chronicled by the fact that our first look at this series was back in May 2012! However, for those of you with the patience (and strong memory) to make it all of the way through, this tale of Achiga High School's journey to the top table of competitive mahjong is finally at an end.

With a perhaps surprising amount of prescience, one of our biggest concerns when we first spoke of Episode of Side A was that it seemed impossible to imagine it squeezing its entire story into twelve episodes - lo and behold, we weren't the only ones to think this, causing the series to ultimately run to sixteen episodes with those final instalments trickling out every few months. Unfortunately for anyone watching each episode as it arrived this effectively killed the pacing of the series, with tightly connected episodes being spread out over such a long period of time that it was a struggle to remember the current state of a game, who was involved in it and what "powers" they have to bring to the table.

Despite this issue making it hard to fully appreciate the Side A (and hard to review for that matter - if you're reading this and pondering whether to watch the show you won't have any such timing issues), thankfully our other concern from the initial episodes of the series soon dissipates. After a less than satisfying start that aims to blitz through proceedings with little care for deriving drama or tension from them, once we reach the national mahjong tournament itself the series settles down into a rhythm far more recognisable and enjoyable for fans of mainline Saki - a heady mixture of in-game tension and personal drama amongst an ever-growing roster of characters. It still never quite reaches the peaks delivered by the original series, but it does a manful job of drawing you into its world and keeping you there while drawing as much excitement and tension from the battles going-on at the mahjong table as possible.

Similarly, Episode of Side A never reaches quite the same level as its predecessor in terms of its characters - of course, a host of mainstream Saki characters put in an appearance here, and there are some genuinely fantastic new characters thrown into the mix - not least Toki Onjouji who, as her name suggests, can see into the future at the mahjong table. It's this kind of insanely over-powered set of abilities (complete with equally over-the-top presentation of those abilities) that adds a lot to make Saki feel unique, while at the same time you can't help but feel that some of these powers are a little too crazy even by the standards previously set by the show. When girls start storing their powers in a team-mate's thighs, you have to wonder...

Assuming you can suspend your disbelief about super-powered, mahjong playing high school girls, then Episode of Side A taken as a whole is a fun romp that reaches a satisfying (if not absolute) climax after a rollercoaster ride that is far from evenly paced but just about manages to remain on the rails after a disappointing start. With an enthusiastic voice acting cast to back it up and colourful visuals aplenty the overall viewing experience is a good one, especially now we have the whole series available to watch freed from the constraints of those long delays between episodes. It might not have the draw that mainstream Saki exhibits, but to fill the gap until the second season of the full-fat series arrives there is still a fair amount of nourishment to be found here.

7
Removed from the long delays between its final episodes, Episode of Side A is a fun dose of mahjong madness that never quite reaches the peaks of the series from which it's derived.
COMMENT AND DISCUSS
blog comments powered by Disqus