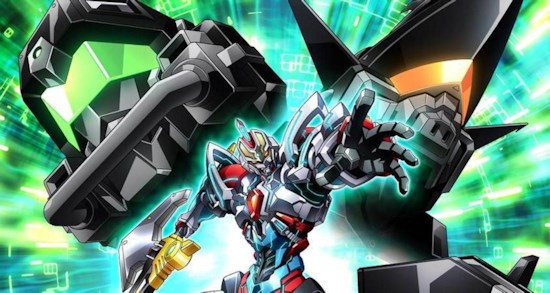 Yuta Hibike wakes with almost total amnesia near to the home of his classmate Rikka Takarada whose mother insists that they bring him inside to recover. For some reason Yuta keeps seeing (and more worringly, hearing) a robot-looking character named Gridman on the archaic computer in the corner of the junkshop/restaurant Rikka’s family runs, which only makes Rikka think he is more odd.

Together with his friend Sho, Yuta begins to piece together the bits of his life he has forgotten – his parents are out of the country and he lives alone, and before today he and Rikka had barely exchanged two words. At highschool his classmates take his amnesia in their stride, then later in the evening a Kaiju appears and begins wrecking huge swaths of the city. At Gridman's insistence Kuta merges with the computer (nicknamed “Junk”) to bring Gridman into the real world as a giant warrior who can stand against the Kaiju. With guidance from Rikka & Sho Yuta & Gridman defeat the Kaiju, but not before a random shot takes out the highschool.

The next day the damaged and destroyed parts of the city have been restored, and Sho & Rikka find that they can now see the mist shrouded kaiju dotting the landscape, and they & Kuta are the only ones to remember the events of the previous night….

5 episodes in and I think I love it. It’s like Studio Trigger realised they had done folks wrong with Darling in the Franx and decided that this show would just be a total love letter to fans of giant dudes fighting giant monsters, all wrapped up in a near-forgotten franchise with a dose of character design influenced by the most niche of Transformers sub-lines (no, seriously, checkout this article – it’s fascinating: a-shattered-glass-anime-ssss-gridman-piles-on-transformers-references ). Oh, and then the climax of episode 3 goes and features our titular hero performing a rocket-assisted sunset flip powerbomb on this episodes kaiju, the creepy-ass Anti.

Now I’ll admit I wasn’t quite sure what to expect from Gridman. I wasn’t aware of the original series (although I don’t think I’m alone in that regard) but a quick Wiki search reveals Gridman the Hyper Agent was a live-action series by Tsuburaya in the mould of UItraman that ran for 39 episodes from 1993 – 1994 and was reworked for the American market running from 1994 – 1995 as Superhuman Samurai Syber-Squad (I used to quite like that show. 'Let's Samurise guys!' Plus Tim Curry was in it! - Ed). Other than being a pioneer for its digital effects work Gridman has otherwise been little more than a footnote, until this season.

Right out the gate the first episode establishes a near dream-like feeling, with the town enshrouded in mist and shadowy Kaiju towering in the background invisible (initially) to all bar Yuta, whose own amnesia means he takes all this in his stride. Rikka is sensible and stubborn, Sho the fanboy who knows the tropes of fighting Kaiju, together they realise that that Yuta might actually be seeing something and the formation of their Gridman Alliance whilst goofily fun gives way to a far more disturbing realisation: whilst the city may be demolished whenever a Kaiju runs rampant, and miraculously rebuilt the next day, it becomes clear that those killed are not just dead, their lives are ret-conned to a point several months if not years prior. The sequence where the our heroes track down the families of the volleyball team killed in the first episode and erased from their classmates memories is downright chilling, made all the more so for the revelation that their death was intentional and for the most petty of reasons. It adds a real sense of stakes to proceedings as the nascent Gridman Alliance try to keep the city from getting destroyed.

Which brings us to Akane Shinjo. Initially just one of Yuta’s class who offers him part of her lunch before a stray volleyball trashes it, it turns out that she is the one sculpting the various Kaiju that dot the city, living seemingly alone in a house littered with garbage bags and display cabinets filled with her sculptures, talking to her own computer-bound entity Alexis Kerib, who eggs her on and gives life to her creations. And for all her academic accomplishments, Akane is clearly not playing with a full hand – if guiding a kaiju to destroy the school whilst the volleyball team she thinks have wronged her were practicing there wasn’t clear enough indication, sending another to kill the home-room teacher who inadvertently walked into her and didn’t apologise then one more to take out the boyband members who got irritated her during the group date between them and herself, Rikka, and their classmates Namiko & Hass, and the way she switches from doting on Anti to treating him like garbage should set any questions to rest. She’s smart though, and the way she works out Yuta is Gridman is neatly set up and executed (and even manages to get the mandated swimsuit episode out of the way early and in a surprisingly tasteful way).

And that’s before we get to the so-called Neon Genesis Junior High Students, a bunch of sharply  dressed & laconic oddballs led by Samurai Caliber who can themselves transform into Gridmans various Assist Weapons (although there is a pretty hilarious sequence where the whole team try to deploy and find they can’t because Junk can’t “run” everything at the same time. I’m sensing a sub-plot where the team scramble to try and find parts to upgrade a 20+ year old PC! I gotta say, I’m really struggling to find reasons not to go searching for associated mecha…..

So so far the plot is very interesting with some engaging personalities in play. The show looks great and it sounds equally fantastic. The opener is a proper slice of retro-heroism, and I dig how the soundtrack lays on the guitar riffs when action heats up. The real question though, is can the show stick the landing? I’m hoping that being tied to a franchise means that Trigger can curb their worst instincts, or have a template in place that makes narrative sense.

9
Overall then to paraphrase, Studio Trigger you had my interest, now you have my attention.