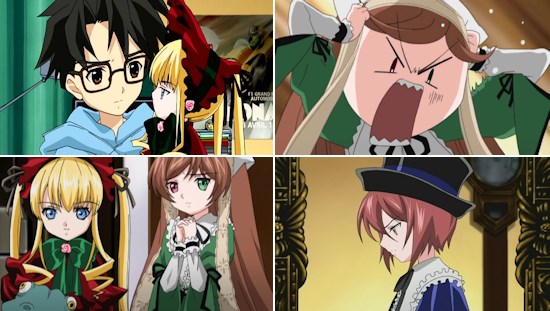 Dolls. Fun childhood toy or creepy subversive item that will steal your soul? Well, neither as far as Rozen Maiden is concerned...

The story revolves around Jun Sakurada, a reclusive high school student who’s dropped out of school and shut himself away in his room, passing the time by ordering items online and returning them before the grace period ends, he’s every online store’s worst nightmare come to life.

So, our “hero” is an obnoxious, unlikable pain in the ass who needs a good, hard kick in the nuts, but that’s precisely why the arrival of a snobbish, short tempered living doll is such a delight.

Ordered by mistake, Shinku (the fifth Rozen Maiden doll) takes none of his pouty, self-indulgent rubbish and sets about straightening out this lowly piece of human garbage (who is nothing short of abusive towards his dim but loving elder sister, to a point where I wanted to kill him) in a violent but deserved series of lessons, whilst she fights off deranged soft toys and other special dolls who are looking to steal her “Rosa Mystica”.

I first read the manga last year, and took great pleasure from watching Jun get his backside served to him, and I have to say the anime follows on the tradition very nicely. With the added benefit of a whiney voice thanks to the English dub, it’s even more fun watching him being menaced by a knife wielding clown doll. Maybe that says more about me than the anime, but I digress.

That's not to say that the tables aren't turned occasionally - an early episode shows Shinku finding a nice compact room with an unusual table which she decides is perfect for taking tea, until Jun informs her she's in the toilet.

Rozen Maiden is a very attractive anime - you only have to look at the images  to see just how pretty the character designs are, and the animation is pretty good stuff too.

With 12 episodes comprising season 1 and a second series, subtitled Träumend (which means “dreaming”) also comprising 12 episodes, there’s plenty to sink your teeth into, and all played out in manageable bites. MVM's 6 eps per disc make it very good value too.

As other dolls appear, Jun’s life becomes steadily more complicated, and the mystery of the Dolls creator, Rozen, also comes to the fore. Although the initial premise of dolls having a battle royale may not appeal to everyone, the rewards are there if you can stick with it.

Personally I liked the humour. Jun shows some signs of redemption (he can sew toys and isn’t entirely useless) but all eyes are on the sassy Shinku, without whom this would be a very dull series indeed.

Minimal - textless opening/closing and the obligatory trailers make this a no-frills release.

7
Certainly not for everyone, but even given it's a show about dolls, it's actually quite entertaining.