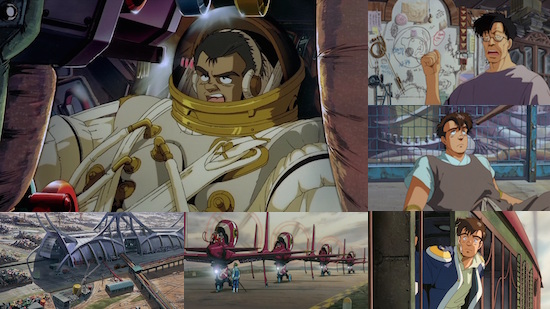 Having never seen GAINAX’s classic 1987 film, Royal Space Force: The Wings of Honneamise, I was somewhat curious to find out what all the fuss was about. It is a film that appears to have divided opinion, having flopped at the box office in Japan it has developed something of a cult following here in the west, thanks in no small part to Manga Entertainment’s VHS release back in the early 1990’s. Now, some twenty eight years since it first hit the cinemas in Japan, Anime Limited are bringing us the remastered film in DVD and Blu-ray Collector’s Edition form.

Remasters of 1980s films do not always turn out as we might hope - sometimes it is simply a reflection of the source material and other times it is a function of the remaster itself. You will be pleased to hear that Royal Space Force: The Wings of Honneamise has fared very well from the remastering process; the Blu-ray looks simply spectacular and really helps the film’s excellent animation shine. Although, that doesn’t mean there are not also a few little niggles with this release - the English dub, while starring no lesser name than Bryan Cranston, is limited to stereo audio, while the Japanese audio track benefits from 5.1 surround sound. The on-disc extras are also a little thin on the ground, with the inclusion of the trailer from the original pilot version of the film perhaps proving the most interesting thing on offer.

Royal Space Force: The Wings of Honneamise follows Shirotsugh Lhadatt, a member of the Honneamise Royal Space Force. You might be forgiven for thinking this was a prestigious job only available to the best and the brightest, but in the nation of Honneamise the thought of the Space Force venturing to the stars is something of a national joke. Shiro himself only joined because his grades weren’t good enough to join the Air Force and follow his dream of flying. It is against this backdrop of the mediocre Space Force that Shiro begins to find his feet as well as his motivation after meeting the highly religious Riquinni. He meets her while visiting the red light district with a colleague one evening after work, where she is handing out religious leaflets. Riquinni looks after a child, Manna, who is somewhat distant and quiet, though Riquinni assures Shiro that she has taken something of a shine to him.

Between his newfound friendship with Riquinni and the death of a colleague in the line of duty, Shiro is inspired to volunteer for an incredibly dangerous mission, taking on the Space Force’s first manned mission to space while his new-found motivation encourages him to kick his training up several gears. Ultimately the rest of the world, the press and Honneamise's enemies in particular, get wind of his mission and the rest of the Space Force gets dragged along with him into a world of fame, expectation, conflict and political intrigue, whether they’re willing participants or not.

Royal Space Force: The Wings of Honneamise is a film that can tell epic tales with nothing more than a few frames of animation - it takes its time building its world and proves to be incredibly thought-provoking at times. Shiro himself is a likeable enough character, and his transformation from layabout to household name is both fascinating and enjoyable. The problem is that his character and the film as a whole are irredeemably tarnished by a certain event in the last third of the film.

SPOILER ALERT: This film contains a rape scene. This would be fine if it sat meaningfully within the context of the story and the characters, but this is not A Clockwork Orange and Shiro is no Alex. I can’t quite work out what the thinking behind it’s inclusion is - perhaps it is attempting to make the point that even our heroes are flawed; perhaps it is implying the pressures of fame and the knowledge of all the suffering around him pushes Shiro towards the unthinkable, though I really don’t know what the creators are trying to say that could not have been said better without tearing the heart from their lead character by having him attack his main source of inspiration while sharing a room with a sleeping child. To their credit, Anime Limited have made sure this scene has chapter markers placed in such a way that it is easy to skip if you so desire.

Unfortunately that’s not the only issue with Royal Space Force: The Wings of Honneamise. The film ends with one of our pet hates here at UK Anime: a montage sequence. Ending an exciting and fascinating climax in this way is rather jarring to the viewer and interferes with your connection to the events on-screen at a pivotal moment.

Royal Space Force: The Wings of Honneamise, then, is a film that is very nearly a timeless classic of animation, but it falls over itself too often to be able to legitimately claim that title. It is a film that you will enjoy for the most part, even love at times, but that may ultimately leave a bad taste in your mouth. Watching Royal Space Force: The Wings of Honneamise is a lot like getting to the bottom of a nice, warm cup of tea, only to end up with a mouthful of soggy lumps from the remains of the biscuit you were dunking in it earlier. You still enjoyed drinking the tea, but the experience as a whole is forever tainted.

Andy on the Wings of Honneamise Collector's Edition

It may not have the majesty of an Anime Limited Ultimate Edition, but the Collector's Edition of Wings of Honneamise still has a fair amount to offer within its well-presented (and nice to the touch) outer sleeve and rigid box. Within that outer packaging, you'll find a Digipak offering up some additional artwork and housing the film on both DVD and Blu-ray, as well as a twenty-page booklet. Within this well-presented piece you'll find some commentary on GAINAX and the film itself, an interview with the director, and a lengthy piece on the film's visual effects. Given the importance of both GAINAX and this film within the history of the medium, anyone with an interest in Japanese animation (or indeed animation as a whole) will drink up this additional content, and our only wish is that there were more of it given how fascinating the gestation of Royal Space Force was within its very particular era.

Overall though, this is a nicely presented Collector's Edition, with additional written content that will appeal to hardcore fans and a satisfying outward presentation.

7
The Wings of Honneamise is very nearly a timeless classic, but it’s somewhat spoiled by a few odd directorial and narrative choices.
COMMENT AND DISCUSS
blog comments powered by Disqus