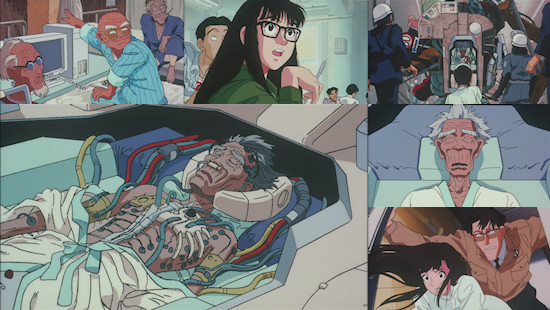 It may be thought of by many as an inherently Japanese problem, but an increasing number of countries (the UK included) are finally realising that they have to come to terms with the consequences of an ageing population and everything that such a shift entails in terms of both economics as well as the more moral and human elements of caring for the elderly.  Having seen the Blu-Ray release of Ghost in the Shell's Solid State Society earlier this year, which also tackles in its own way the issue of an ailing, ageing generation within Japan, we now find ourselves with a rather timely Blu-Ray release of Roujin Z, bringing this classic 1991 film from Katsuhiro Otomo (of Akira fame) back to the UK for the first time since the days of VHS.

We come to the future Japan of Roujin Z via the film's titular roujin (or "old man") Kijuro Takazawa, a bed-ridden elderly gentleman who has, to put it politely, seen better days.  Takazawa is, to the mind of the Ministry of Public Welfare, "part of the problem" - a drain upon government resources and healthcare with his incessant demands to be looked after.  This is a very different outlook to that of Takazawa's carer, Haruko Mihasi, a young volunteer carer and student nurse who vehemently believes that the elderly need to be treated with love and affection no matter their human or financial demands.

It's these two polar opposite opinions which quickly butt heads as the Ministry of Public Welfare unveil the Z-001 - a machine-cum-hospital bed designed to deliver an elderly patient's every need from bathing through to eating and beyond; an all-singing, all dancing automaton powered thanks to the wonders of nuclear energy.  What could possibly go wrong?  With Takazawa chosen as the ideal test subject for the Z-001, we soon see some early flaws in the system as Kijuro inundates his former carer with electronic messages to the point where she decides to check up on him alongside her student buddies, but it's after the Z-001 and its occupant is recaptured for further testing that things really start to go wrong for everyone involved in this experiment.  So begins a desperate attempt to halt the Z-001 as it tears across city and country thanks to a haywire state-of-the-art computer and the desires of its elderly passenger for an impromptu day trip, while both Haruko and government employees give chase with their own unique concerns in mind.

Despite showing its age in terms of its animation quality, which both looks great in places and has all of its corner-cutting flaws amplified in others by the move to High Definition, Roujin Z nonetheless proves to be a great example of a well-plotted movie - the film's eighty minute running time is impeccably paced and keeps moving briskly from beginning to end, and despite the seriousness of its core subject matter the entire production is run through a deftly satirical lens to make for an amusing affair that knows how and when to play for laughs.  If nothing else, the film's collection of old geezers turned hackers who break into the Z-001's supercomputer are something we can all aspire to in our own future old age!

As we've already mentioned, Roujin Z isn't the greatest looking movie of its era - it's no Akira, that's for sure - but there's no faulting a superb Blu-Ray transfer to make the most of the film's High Definition master which simply looks wonderful to the point where it would probably be churlish to even consider comparing it to the mid-1990s VHS release.  The English dub provided with this release is also pretty decent even if it veers off into risqué jokes more often that its Japanese counterpart (and we should also mention that it's merely stereo compared to a full 5.1 surround mix for the Japanese language track which sounds far stronger as a result), and subtitling is good aside from one or two minor missing exclamations which are left untranslated.

Whether you're something of a "roujin" yourself who grumbles about anime not being like it was back in the good old days or a newcomer looking to explore some of the old classics, Roujin Z is undoubtedly worth of your attention - it won't dazzle you visually like Akira or stretch your mind like Ghost in the Shell, but it's a funny and hugely enjoyable take on a thought-provoking subject that still finds time amidst all the mirth to make its point about an increasing elderly population and the personal costs which arise from it amongst its satire and madcap comedy.

A film with a heart of gold that can produce laughs and entertainment in equal measure - what's not to like?  Now if you'll excuse me, I have a nuclear-powered bed to crawl into...

8
It may look a little dated, but Roujin-Z is a superbly-paced and immensely enjoyable satire that deserves a new lease of life within anime fandom.
COMMENT AND DISCUSS
blog comments powered by Disqus