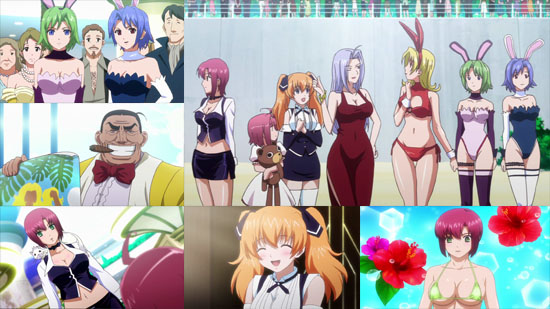 Hi Japan. It’s me. I have to tell you something. If you’re that desperate for ideas for new anime, for the love of god don’t take it from a character that was used to market gambling. Yours sincerely, a brain melted anime fan. So, lets get your anime cliché bingo boards out and let’s see if we can get a full house.

Rio - Rainbow Gate’s "plot", for lack of a better term, stars the casino dealer Rio as the so-called Goddess of Victory and the lead attraction at the Howard Resort. People far and wide come to see Rio and be praised with good luck at the casino. A young girl named Mint arrives at the casino with her gambler grandfather, with Rio forced to look after the child and her stuffed bear. Some stuff happens about gambling and supposedly everyone has a great time or something. I dunno, I lost interest about half way through the first episode.

So… where the hell do I begin? Is it the man who has a thing for stuffed bears, a completely pointless battle for a card that looks at home in Yu-Gi-Oh or the crazy ghost woman who has a thing for fried chicken? But there you go, I’ve summarised the plots of three of the episodes of this series in a sentence. The narratives for each episode so far have just been complete non-sensical drivel that are an insult to basic intelligence. Granted when watching this kind of show you aren’t exactly expecting to engage your brain, but when it is nothing but wall to wall clichés, you have to wonder if the people writing this even bothered trying. Considering that gambling is an adult pastime, you would think it would have more distinctly adult themes.

Ah, the clichés though. This is where the fun part of Rio comes into it all, and I actually had more fun counting them than watching the damn episodes. For a quick run through of the stand-out ones, you have; big breasted protagonist, big breasted protagonist being “forced” to wear skimpy clothing, Playboy bunny suit wearing girls, the clumsy girl, the pair of girls where one says everything and other repeats the last few words, the cute little girl looking up to protagonist and the  posh-cum-evil woman laugh. You know the one I mean, where the woman looks to one side, raises her hand to her mouth and laughs by going, “Oh ho ho ho ho ho!” I mean for Christ’s sake there is even a magical girl-styled transformation sequence from Rio's slight grade above slutty “normal” work uniform to a bikini outfit, whereafter she screams that she is overly exposed and then promptly forgets about it for the rest of the episode.

Let’s not even get started about the owner who “forces” Rio to wear all the revelling clothing, do ads showing off her breasts and generally doing everything to make Rio work 24/7 and more than likely being a hairs breath away from being a full-on rapist. While watching this I kept thinking “you could never do any of this in real life”.  Rio’s “ability” to make people lucky makes her the worst casino employee in the world - if everyone starts winning big whenever she walks in the room, you’d want her to work in the freakin’ kitchen and avoid all the players. Who the hell employs someone that loses you money? Also, she always complains about having to wear all the awful clothing and doing all the extra hours, yet in the UK one trip to the employment tribunal and she could sue her boss for all he is worth (now that would be an anime worth watching - Ed).

Fine, this is anime and you do have to suspend your depictions of reality - I mean vampires aren’t real and as much as I would love to stuff a Pikachu into a red and white ball, I personally don’t want PETA on my arse. But there are times where you just sit and watch a show while shouting out at two minute intervals “what complete crap!” It is really hard to tell if this series is self-parodying so subtly that I am missing the point or if it really is just pleasing as many fanboys as possible in one hit.

Usually after giving something like this such a tongue-lashing I’ll even up the review with the positives of what it brings to the table. I have to be honest, I am seriously struggling here. There is so much tits and arse in this series, with plots and characters which combined are about as three dimensional as a sheet of A4 paper, I can’t understand how people could get much enjoyment out of this. But then you look at the Facebook likes and star ratings on each episode of this on Crunchyroll and you can see that there are fans of the lowest common denominator out there and they eat this stuff up.

To be honest, we all knew what we were expecting from Rio - Rainbow Gate before we even started. The character was wafer thin beforehand and adding in this extra crap doesn’t pad her out any better (which is kind of ironic when you think about it). But now she has friends, a setting, a license to print money to fans who will buy any and all merchandise related to this series and I weep for you. If you are seriously wanting for something that will make you look like a perv when someone bursts into your room to ask you something, then this will hit the bill. For others looking for something that is actually more than just animated tits and arse with a multitude of clichés, and heaven forbid maybe even a decent storyline, then just stay the hell away. You have been warned.

3
The worst kind of cliché-ridden, exploitative crap that we've seen in a long time.
COMMENT AND DISCUSS
blog comments powered by Disqus