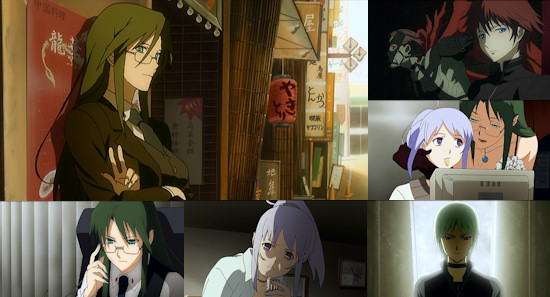 For longer than anybody can remember, immortality has fascinated humanity; of course, the prospect of cheating death is a tempting one in many ways, but every medium you can imagine has also immersed itself in the negatives of eternal life, tackling it from a variety of angles.  Manga Entertainment's latest anime which offers us the chance to delve into a world where it is possible to achieve immortality is Rin: Daughters of Mnemosyne, a show with a subtitle representing the personification of memory within Greek mythology, which probably gives you an early clue as to where the series ultimately aims to tread.

Before we start, it's worth making a quick note as to this show's origins, as this six part Original Video Animation was commissioned to celebrate the tenth anniversary of Japan's AT-X television network - A channel known amongst anime fans for its refusal to censor content where other broadcasters would get decidedly trigger-happy with various tricks to block out any excess of sexual or violent content.  With this in mind it's no surprise that Rin: Daughters of Mnemosyne lays on the sex, gore and torture thick and fast, making it well worthy of the 18 rating given to its UK release as it indulges in the excesses afforded it.  Indeed, if you want to get a taste of what this series is all about, then look no further than its opening title sequence which introduces us to a pile of naked female bodies, blood, torture and even more nudity, all set to a hard rock backdrop.

As for the plot, we first drop into the life of Rin Asogi and her loyal associate Mimi in the early 1990s, with the pair working within a kind of private detective agency run by the former.  While their current case appears to be no more exciting than a hunt for a lost cat, things soon become decidedly more interesting as Rin ends up rescuing a complete stranger from a handful of pursuers - we all know that men with sunglasses in black suits are up to something, and before we know it our heroine is up to her ears in some decidedly disturbing goings-on featuring a pharmaceutical company who are conducting some decidedly unsavoury research under the instructions of a viciously sadistic woman who goes by the name of Sayara Yamanobe.

This opening to the series sets the scene in various important ways, from swiftly hinting at and then confirming our protagonist's immortality to introducing characters whose importance will live on throughout the series.  It's also apparent from the very start that Rin is the object of attention to another unsavoury individual, a mysterious figure who goes by the name of Apos and a pivotal character as the show builds towards its climax.

As the series progresses, so it begins to really have some fun with the immortality of some of its characters, making the most of their refusal to age in physical terms by zipping forward from the 1990s all the way through to the year 2055 and beyond.  This actually makes for some story-telling elements which are as smart as they are fun, taking us from early episodes that see Rin and Mimi's investigations hampered by limited communications and computing technology through to later instalments that have more than a whiff of Ghost in the Shell: Stand Alone Complex about them as the virtual world encroaches ever more heavily upon real life.  These jumps in time also mean the removal of previously likeable characters (although rarely do they die of natural causes, such is this show's nature) and the introduction of new ones, which works surprisingly well at keeping the series fresh while also retaining the all-important threads that tie each episode together.

Where Rin really gets its teeth into the whole immortality angle however is in bringing gruesome "death" upon gruesome "death" to its titular character, with the series delighting in putting her through ever more extreme forms of torture and obliteration before allowing us to witness at least part of the aftermath.  I'd hate to spoil any of those brutally realised moments for you, so suffice it to say that the opening scene where Rin is shot repeatedly before falling around fifty feet, leaving her severed arm clinging to the rooftop of a nearby building, is probably the most pleasant death she experiences during the series.

Coming a close second to those violent deaths and the various wince-inducing (to put it mildly) torture scenarios that the show dreams up are the large helpings of sex delivered by the series.  Rin lives in a world where information is bought not with money but with lesbian sex, and where the biggest peril for an immortal woman are so-called angels; transformed men with wings who hunt out immortal woman so that they can feast upon their flesh until they die.  While having sex with them of course.

This visceral blend of gratuitous sex and violence feels like a return to a bygone age where anime was popular with teenagers largely because of its sex and violence, bringing back memories of Ninja Scroll, Golgo 13 and its ilk.  Indeed, Rin's entire aesthetic from its visuals through to its soundtrack seems to hark back to those days when most of the anime that reached our shores was designed to titillate and satiate the blood-lust of teenage boys.

In this sense, Rin is something of a nostalgic journey, but thankfully there is more to it than that - although it isn't for the faint of heart and taken at face value the series is borderline nonsensical, particularly as it builds to its climax that can only be described as a kind of "sexy Evangelion", there's actually some solid story-telling to be found beneath all of the blood and bodily fluids.  Each episode has its own coherent internal narrative which can be enjoyed in its own right, while the change in time for each episode keeps things fresh, allowing for the series to explore a number of very different concepts both visually and in terms of its plot.

Although the show's animation quality isn't always anything to write home about it's mostly passable, but the show features some top-notch Japanese voice actresses while also boasting an English dub that is rock solid.  Extras are a little thin on the ground on this two-DVD release, but with six forty-five minute episodes to enjoy there are a good few hours of entertainment to be found here.  Certainly, if you're an older anime fan with a penchant for no-holds barred anime that doesn't seek to spare its viewers the full gamut of blood and nudity (often at the same time), this is probably the best new release that you'll have seen in a long time.  If the thought of sitting through watching women impaled with swords and worse on a regular basis disgusts you however, you'd best move along sharpish.

English 5.1 and Japanese 2.0 audio, English subtitles.  Extras consist of commentary on episode two featuring the US dub director and voice actors, an interview with the show's Japanese voice actresses and an image gallery.

8
A stylishly visceral experience that could be an instant classic in the eyes of older fans, while others will find the whole thing a turn-off.
COMMENT AND DISCUSS
blog comments powered by Disqus