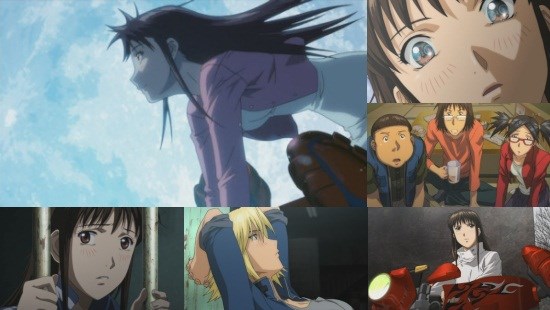 The leap from ballet to biking may seem like a rather large one to put it mildly, but it's just such a transition that powers Rideback, Madhouse's 2009 manga to anime adaptation which is currently available to UK viewers in streaming format via FUNimation Entertainment's YouTube channel.

Rideback's setting moves us into a near-future Earth which is almost entirely under the control of a single organisation known as GGP; a faction which is increasingly tightening its grip and control over its realms after coming out as top dog via a massive coup staged using the latest technologies available to them.

Although unrest and civil disobedience is on the increase in light of all this as the series begins, none of this is really of any concern to the show's protagonist Rin Ogata, a former ballerina who quit what seemed like a promising career after an injury several years previously.  This major decision seems to hang heavily over Rin, with nothing able to replace the passion she felt for ballet within her heart, although this is offset by her mixed feelings towards the pursuit that consumed so much of her life previously.

It's here that the show's titular vehicle comes into the equation - the Rideback, a blend of motorcycle and mecha that requires a not inconsiderable amount of skill to successfully pilot, particularly in its upright, "mecha-esque" mode.  A chance opportunity for Rin to simply sit on a Rideback soon turns into an unexpected thrill ride as it goes haywire - a possibly nightmare which becomes a dream for Rin as her ballet skills allow her not just to return from her little joyride safely, but having enjoyed every second in the process.

Rin's new, albeit occasionally reluctant, love affair with the Rideback set against a backdrop of GGP looking to crack down on these devices in fear of them being used to trigger a revolt brings these two seemingly disparate elements together, and before we know it Rin is part of that rebellious insurgency herself.  From here, the political and personal are both thrown into the melting pot as the situation within Japan becomes ever more dire, with Rin increasingly finding herself in the middle of this vortex and pressure increasing on every decision she is forced to make.

The first thing that we have to note about Rideback is that is can be quite a visual feast at times - the Rideback designs themselves are excellent and tread the fine line between perceived realism and simply "looking cool" impeccably, while character designs and backdrops also stand out sufficiently from the crowd.  Indeed, it's rather a shame that the series is currently only available in a low-quality streaming form, as it's worthy of a DVD quality visual treatment at the very least. On occasion, these visuals mesh superbly with the content of the series itself, particularly when the going gets tough and the action portion of the show kicks in to gear - episode four alone is an absolutely stunning, action-packed affair that crosses the slow-motion trickery of films like The Matrix with the adrenaline-pumping content of video game Mirror's Edge with superb effect.

Rideback's biggest trouble however is that, unlike the balletic movements of its protagonist, the series as a whole is far from smooth and graceful in its story-telling.  The interesting concepts and premise available to the series threaten to be undermined by a juddering, occasionally clumsy execution from a series that often seems like it isn't sure what it wants to be.  As a result, it never really gets to grip at all with the political aspects of the story, while the more personal emotional aspects can be contrived at times.

That said, I don't want to take too much away from the series as a whole - its action is compelling, its treatment of certain plot twists and progressions certainly doesn't pull any punches, and the overall impression of the series once it comes to the end of its twelve episodes is positive.  Yes, it can be plodding at times and frivolous at others, but if you can forgive it that then Rideback is a fascinating and enjoyable little series at its core.

Rideback can currently be viewed in streaming form on the FUNimation YouTube channel.

7
Despite suffering from inconsistent pacing, Rideback is ultimately a satisfying series at its heart.
LATEST REVIEWS
Girls' Last Tour