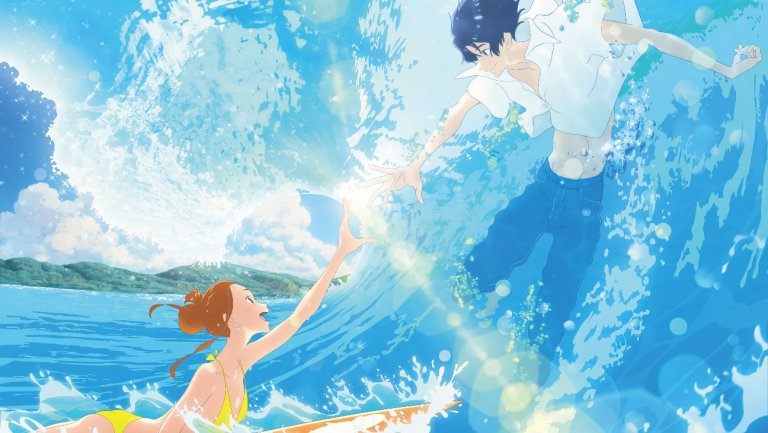 Hinako moves back to a town she stayed in as a child to attend university. She stays in an apartment building by the sea in order to indulge in her hobby of surfing. This daily routine is noticed by two fire fighters Minato and Wasabi. After rescuing Hinako from her apartment catching on fire Minato and Hinako start dating. Joined by their love of surfing and their fondness for an old pop song, things look rather perfect for the young couple. Until tragedy strikes and their romance is cut short. Hinako; unable to cope with the loss of Minato starts to see him in water when she starts to sing their song. Could all this be an illusion or something deeper at work.

Yuasa’s latest film is a more clear cut romance film than has earlier works. A film that attempts to show how one deals with loss and also shows how people can save others that are in trouble.  The first thing to note about the film is its visuals. Those who have seen Science Saru’s previous work will be used to the simple art in character designs with more of the detail being saved for backgrounds. Here it feels like things have been taken up a notch with the art and the animation. The film at times does these simulated camera movements making the whole film feel more cinematic. There are also great water effects, flame visuals and some stunning looking food. In terms of visuals its an absolute treat for the eyes.

Where the film falters is the handling of its themes. Mainly coping with loss. Most of the situations Hinako finds herself in are treated as comedy. Granted some lead the way to this, such examples are Hinako talking to the water in a toilet bowl and walking hand in hand with a giant inflatable porpoise. While this would be fine with just the audience reaction to the absurdity, but the problem is how other characters in the film act. Most of them really don’t know how to handle Hinako’s situation with most berating her to suck it up and get on with it rather than help her grieve properly.  This is also the main problem as well. Hinako’s arc in the second half of the film doesn’t feeling satisfying. Especially due to one scene near the end that feels more like a gut punch to Hinako and the viewer rather than the intended bitter sweet moment it meant to be. Along with this there is a big reveal/realisation that Hinako goes through that doesn’t feel resolved since she doesn’t get the chance to talk to anyone about it.

With all this being said the film does have an important message and theme of helping those in need shown in various ways. Whether through actions, words or even just by being there for someone. There is power in human interactions. Another strong point is that Hinako is a rather likeable protagonist that you want to root for. In the first half of the film she is headstrong, confident and fun loving. In the second half we do see her go through a lot of sorrow which at times feels a bit overbearing. To get her through this she sings the song that both her and Minato like. In all honesty I got sick of hearing it very quickly. The song is decent enough but its sang so much it loses its charm.

Which is my main complaint about this film. Compared to Yuasa’s previous films this one is severely lacking in charm. It has its comedic moments, it has its tragedy, it even has its fluid and excellent animation. But it has no charm. It just feels like a film made by the numbers in order to cash in on the young adult star crossed lovers trend set by Your Name. Trying to emulate a style of film without having any of its soul. Not a bad film by any means but not one that is particularly great.