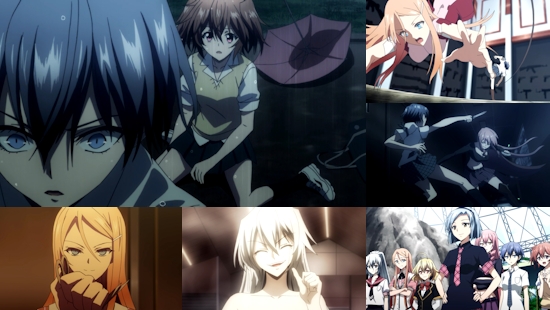 Starting out at a new school is always a fraught time. Will you fit in with your classmates? Will you make friends? Will everyone else in your class turn out to be an assassin who has been hired to kill you?

Okay, so maybe that final question isn't a typical concern for a new high school student, but it's certainly a worry for Haru Ichinose. Haru is a new student at Myoujou Academy's fabled "Black Class", and as it turns out she's also the centrepiece for a decidedly immoral game where she is the prey for a dozen high-profile assassins. The first assassin to kill Haru will be granted any wish they desire by the organisers of the "game", but before carrying out their dastardly deed the rules state that the individual in question has to give advance notice in writing to the victim.

It isn't explicitly Haru that we follow through this harrowing "adventure" however - instead our main focus is upon one of those twelve assassins, Tokaku Azuma, a girl who is the latest in a line of highly-trained knife-wielding killers that has run through her family for generations. Finding herself rooming with Haru, Tokaku takes an unusual decision for reasons that even she can't verbalise - to turn from assassin to protector and vowing to keep Ichinose safe from those who would seek to do harm to her.

With this setup in place, Riddle Story of Devil becomes something of an "assassin of the week" affair - each week, we're introduced more comprehensively to the back story of one of the Black Class' assassins, and then watch as she announces her intention to kill Haru and then execute upon that intent using the unique skills at her disposal. Initially, this looks set to be something of an issue for the series - none of its characters appear to be all that interesting beyond making it plain that most of its cast are insane to a greater or lesser extent, and their attempts at killing Haru feel similarly half-baked - however, it seems as if the show saves its best characters until last, as by the time we reach the second half of the series things improve markedly. In fact, some of the stories contained within the series are surprisingly affecting, and when coupled with some far more interesting high stakes attempts on Haru's life some of the later episodes of the series are far more compelling. Admittedly this culminates in a rather clumsy and not entirely satisfying finale as the layers are peeled back as to why Haru has been selected as a target, but by then we were at least sufficiently invested in the cast - and in particular the show's two leading ladies - to have more than a passing interest in its eventual resolution.

It may not be a visual tour de force, but Riddle Story of Devil does makes good use of what's available to it aesthetically - all of its character designs are eye-catching and fit well with the general mood and colour palette of the series, and even if it doesn't have a huge budget to blow on its action scenes when the knives and similar start flying it proves to be more than competent at making such moments tense, dramatic and occasionally rather cool. Those character designs are also backed up by competent voice performances that capture the individuals they represent throughout, and the subtitles available via the show's streaming presentation on Animax give us no cause for complaint. Finally, with an ending theme for every character, there's plenty of good music which springs forth from the series too.

Although its premise and setup seems to follow the same trend of violent insanity that has been proven popular in shows from Elfen Lied and Deadman Wonderland all the way through to Future Diary, in actuality Riddle Story of Devil is a surprisingly reserved affair. Yes, most of its characters are "troubled" individuals to put it mildly, but there really isn't all that much blood and guts on show, and very little in the way of death and mayhem in comparison to what you might expect of a series which throws twelve assassins into a classroom. This isn't necessarily a criticism of the show however, but rather a simple readjustment od expectations, and once the idea that the series will provide a bloodbath is placed to one side we find that Riddle Story of Devil has plenty of entertainment to offer via some strong characters and pretty decent story-telling that succeeds more often than it fails within its broadly episodic structure.

From humble beginnings that threatened to be far too repetitive in their execution, Riddle Story of Devil has managed to create a series worth watching - its inconsistent and requires that you "buy in" to its premise, but if you have the patience to stick with it then the series will reward you for doing so. Whether it will prove memorable enough to be worthy of repeat viewing is another question, but as a competent slice of streaming entertainment in particular this effort fits the bill.

Riddle Story of Devil is available to view on-demand for subscribers to ANIMAX UK.

7
Riddle Story of Devil starts slowly, but manages to overcome its episodic story-telling to provide a number of entertaining moments that mark it out as potentially worth watching.
COMMENT AND DISCUSS
blog comments powered by Disqus