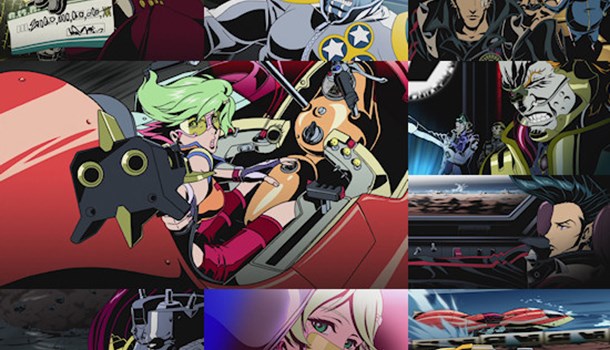 Reviewing Redline for its physical UK release is actually rather a daunting prospect for a couple of reasons - firstly, on account of the ever-swirling hype around this animated movie which spent so many years in the making, and secondly because it's such a visually arresting film that trying to sum up its impact and appeal in words alone is a challenge in itself.

In all honesty, the best advice to any potential buyers of Redline would be to find a way to watch its first twelve minutes, which sees us joining a gathering crowd of weird and wonderful creatures from around the galaxy before both they and us are blown-away by the arrival of a motley crew of racers currently engaging in a road race known as the Yellowline.  As the race enters its final stretch, we soon get a taste of what this form of sport is all about - an anything goes blend of Wacky Races meets Cannonball Run, but with missiles and harpoons.  For the next ten minutes we're treated to a fireball of colour, movement, noise, blood, sweat and tears, all of which are animated with an often stunning eye for detail and a superb appreciation of how to convey the feeling of movement and intense speed, occasionally in some rather innovative ways.

While Redline could get by quite easily by simply feeding us adrenaline-pumping race after race for the entirety of its running time, it nonetheless does offer us a couple of on-going plot threads across the course of the movie.  Our focus as we're taken into the film's slightly crazy world is a racer who goes by the name of JP, as on the one hand we explore his relationship with mechanic and long-serving friend Frisbee as the latter wheels and deals in race fixing to pay off old debts, while on the other we find a burgeoning love interest for our quiff-sporting hero in Sonoshee McLaren, a fellow racer with more interest in machines than men.

It's the relationship between Sonoshee and JP which occupies a fair portion of the film's middle section, as it almost flawlessly walks the tightrope placed between the aforementioned Yellowline and titular Redline faces which book-end the movie.  JP and Sonoshee's relationship never feels forced or over-bearing, nor does it ever outstay its welcome as we frequently shift our attention to other competitors and the more general build-up to the Redline itself. Whether it's via TV-style introductions to the other racers which inform and entertain in equal measure or a peek into the covert preparations for the race, there's always something to keep your interest.

Finally though, we come to the big event itself - the Redline, hosted against their will by the planet of Roboworld; a host with a strong desire for peace according to their words but an even stronger desire to unleash the full force of their massed weaponry upon the Redline's competitors according to their actions.

Thus, the final act of the film is an almost non-stop barrage of racing, running and gunning as the assortment of Redline racers try to win the biggest prize in the universe without being blown to smithereens by their enraged hosts.  As per the start of the movie, this is an eye-popping visual spectacle from beginning to end that eschews realistic physics or any kind of common sense in deference to over the top insanity and pure, simple lowbrow entertainment, backed up by a thumping techno soundtrack - and boy does it work a treat.  By the film's climax you find yourself straining every muscle as you try to will the Redline's potential winner across the line, and it's at that point you realise just how gripped you've been by the whole thing before the film's beautiful ending theme soothes the excited tension that's built up within you over the previous hour and a half.

Never mind analysis of its plot or objectives, watching Redline can be described simply as "an experience" - it's a movie designed to make you feel rather than think; to thrill you rather than provoke discussion.  In these terms it succeeds with an almost terrifying exactitude - it seems to know exactly what to provide the viewer and when, and it's utterly engaging from first minute to last as a result.  This is backed up by the sheer imagination of the film's visuals and design - not only does it pack out its universe with inventive characters (some of whom are making cameos from previous works directed by Takeshi Koike, most notably Trava and Shinkai from the Trava: Fist Planet OVA), it still finds the time to build the world and its mythology further as the movie progresses to draw you into its vision.

The only real question mark over which some have opined at length is whether Redline has what it takes to be a so-called "break-out" movie that lures those from outside of anime fandom into our cosy confines.  Personally, I'm not sure it has the ability to do what Akira and Ghost in the Shell did a generation ago - some of its characters and ideas are still deeply rooted in anime traditions (look no further than the two magical girl racers) - which is potentially a shame, as there's clearly a vein of western influence running through the film as well.

Moving on to the specifics of the film's UK release through Manga Entertainment, Redline's Blu-Ray release in particular is a perfect advertisement for the format - detailed, colourful and straight-up beautiful to behold to make the preferred format for purchase of the film a no-brainer if you have a device capable of Blu-Ray playback.  In terms of audio, the film's bass-heavy soundtrack is also well realised here, and although the movie's English dub can't quite live up to the intensity of its Japanese counterpart, the voice actors for JP and Sonoshee in particular do a sterling job in the midst of a solid dub.  The film itself is also nicely accompanied by a couple of "making of" features which are well worth a look, as is an early trailer for the film from 2006 which shows both how far Redline came in its subsequent years of production and also some of the nicer touches which were lost in the intervening period.

Although its DVD release can never hope to match the beauty and colourful splendour of its Blu-Ray counterpart, and despite missing one of the extra features available to its High Definition big brother, it nonetheless offers up a crisp and impressive transfer that still contains the core positivies of Redline in a decent looking and well-produced package - don't feel that you should miss out on this movie just because you don't have the required HD-capable equipment.

To conclude, there's very little I can find to say that is anything other than glowingly positive about Redline.  Sure, it isn't highbrow or thought-provoking, but who cares when you're watching perhaps the most visually arresting anime movie of the past decade?  There are more strings to Redline's bow than merely pretty visuals thankfully, with a plot and concept that perfectly backs up its high-octane hijinks, and characters placed within a world that you can't help but love and be fascinated by.  Let's distil this down to an even more simple closing thought: Buy Redline as soon as you can.  You won't regret it.